Manny Pacquiao looked good against a shot fighter. He might be the one who looks shot if he chooses the wrong opponent for his next bout.

Pacquiao should be applauded for his performance against Lucas Matthysse last weekend in Kuala Lampur, Malaysia, where he pounded the Argentine to the canvas three times and stopped him in the seventh round of a welterweight bout – Pacman’s first stoppage in almost nine years.

In the process, Pacquiao (60-7-2, 39 knockouts) demonstrated that he has more to give in the ring at 39 years old. That can’t be disputed.

But let’s not go overboard. Some people seem to believe that this version of Pacquiao has magically reverted to the dominating champion of a decade ago and could compete with the likes of young, athletic welterweight titleholders Errol Spence, Terence Crawford and Keith Thurman.

Yes, Pacquiao looked much like the Pacquiao of old on Saturday but only because Matthysse has almost nothing left in his tank. If you sub in Spence, Crawford or Thurman for Matthysse, you’ll see a completely different Pacquiao.

Pacquiao once overwhelmed opponents with his quickness and work rate, as he threw punches in bunches from every conceivable angle. Today, while he still has fast hands and feet, he’s no longer the blur he was a decade ago. And he certainly throws fewer punches than he did in his youth. 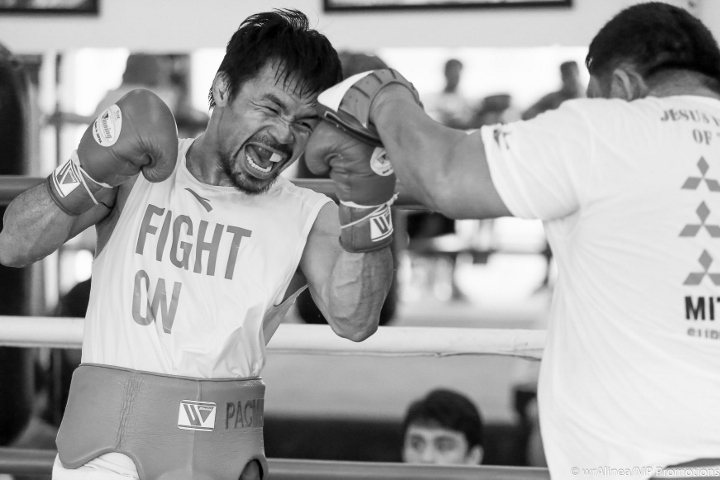 As a result, I believe strongly that Spence and Crawford would eat Pacquiao alive while Thurman would beat him easily. I’m not saying they would do to Pacquiao what Pacquiao did to Oscar De La Hoya, who was sadly unrecognizable in their 2008 changing-of-the-guard fight, but these fights might not be pretty.

And I don’t have to stop at Spence, Crawford and Thurman. I don’t think Pacquiao would beat Danny Garcia or Shawn Porter, either, although I’d give the old man a chance to win those fights.

The point here is that Pacquiao should think long and hard before choosing his next opponent if he doesn’t want to end up like De La Hoya or other faded stars who were annihilated – and embarrassed – in their final fights.

And there are good options.

Pacquiao did the obvious after stopping Matthysse: He began efforts to lure Floyd Mayweather Jr. out of retirement for a second superfight.

I have to say that I gagged when I read Pacquiao’s words. He and Mayweather were past their primes in their first meeting, in May 2015, which turned out to be a historic dud given the immense pre-fight hype. The only thing they can offer us at 40-something is the equivalent of an old-timers game. I, for one, don’t want to see that.

I get it, though. I get why Pacquiao wants that fight. He has only a few more fights in his future; he wants to make the most financially out of the time he has left. And even at this stage, because of their names, Mayweather vs. Pacquiao II would generate absurd paydays for both fighters.

I think Mayweather-Pacquiao a disaster from a boxing standpoint but it’s a no-brainer from a business standpoint, although I don’t believe Mayweather will come out of retirement.

If that fight doesn’t happen – and let’s hope it doesn’t – here are some other possibilities.

Terence Crawford, Errol Spence and Keith Thurman: They’re combination of youth, speed and natural gifts would be too much for an aging Pacquiao. He would have an outside chance of beating Thurman, who seems to hold back in big fights, but I would bet the house on the WBA titleholder.

Danny Garcia: Garcia has power and underrated skills, as he demonstrated in a close loss to Thurman in March of last year. A 29-year-old Pacquiao would’ve beaten a prime Garcia; I doubt a 39-year-old Pacquiao has the physical tools to overcome a very good young opponent.

Shawn Porter: Porter’s swarming style would give Pacquiao problems, just as Jeff Horn’s aggression did. Remember: Porter’s only losses were close decisions against Thurman and Kell Brook. Pacquiao would have to hurt Porter to win, which is possible but unlikely.

Amir Khan: I think Khan might overwhelm Pacquiao with his speed but the Briton has that vulnerable chin and has been hit-and-miss in big fights. This would be an entertaining matchup.

Adrien Broner: Broner has the youth and tools to beat Pacquaio but he’s not mentally strong and has struggled at welterweight, which would make him vulnerable against an unflappable veteran like Pacquiao – even as he approaches 40.

Jessie Vargas: I think a rematch of their first fight, which Pacquiao won by a wide decision, would be more competitive. But been there, done that. I don’t find this matchup compelling and I’m sure I’m not alone.

Andre Berto-Devon Alexander winner: I can’t get too excited about either potential foe but Pacquiao-Berto might be fun to watch because of their styles. Pacquiao probably beats either guy.

Jeff Horn: The story line is good. Pacquiao would try to avenge an injustice in the first fight and most likely would succeed. But who really wants to see this?

Mikey Garcia: The lightweight titleholder is on pound-for-pound lists, which might not bode well for Pacquiao, but this isn’t a horrible style matchup. Garcia has excellent technique and unusual power but he’s not unusually quick and he’d be moving up in weight to face Pacquiao. I’d pick Garcia to win but Pacquiao could make things interesting.

Juan Manuel Marquez: No. Please, no.