The taller Thurman looked down at Pacquiao as they stood face-to-face following their weigh-in at MGM Grand Garden Arena. Thurman and Pacquiao were the same weight moments earlier, however, when they stepped on the Nevada State Athletic Commission’s scale.

Thurman, of Clearwater, Florida, and Pacquiao, of General Santos City, Philippines, each officially weighed in at 146½ pounds. 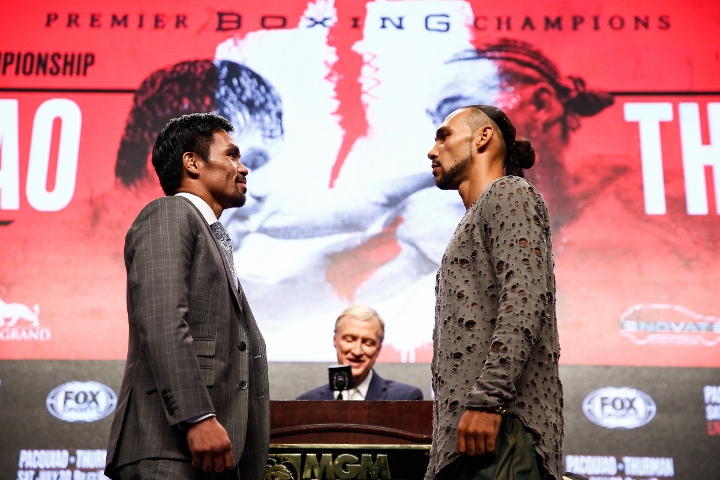 Their 12-round, 147-pound championship match will be the main event of a four-fight FOX Sports Pay-Per-View telecast from MGM Grand Garden Arena ($74.95 in HD). They’ll fight for Thurman’s WBA “super” welterweight title.

The Plant-Lee and Ajagba-Demirezen fights will be broadcast by FOX, before the action shifts to FOX Sports Pay-Per-View.

Java idiot! Who cares what you think. You're prolly busy playing with yourself!😂

Fight if the year coming up

[QUOTE=strykr619;19913536]Marg was a much larger man, Thurman telegraphs his punches like Marg thou so expect a similar result aka UD (i dunno If Thurman has Marg's chin thou).[/QUOTE] Yeah, over exaggerating the size advantage. Thurman's roughly the size of Miguel…

[QUOTE=Terrell1555;19914084]Wow Thurman looks very ready, and he got the eye of the Tiger look, like he ain’t about to capitulate the thrown to nobody![/QUOTE] Thurman always has the eye of the tiger. He has the mentality of a true champion,…

The height disparity is similar to Pac vs Cotto. Keith has just an added 1/2 inch taller than Cotto. Not that much