No matter what happens from here, last Saturday night is always going to stand out.

It wasn’t just Manny Pacquiao winning. It was the way he won. Keith Thurman resisted, gave everything he had, and the older man still wasn’t to be denied. It was like a greatest hits list early, Pacquiao scoring a knockdown and Thurman’s face showing the surprise of how sudden Pacquiao can be and the realization he’d been had.

Don’t let the drama of the evening fool you. Pacquiao didn’t really turn back the clock. While he threw almost a hundred punches more than had been the case in recent decision outings, it was still shy of the activity he kept in his prime.

No, instead of turning back the clock it was the latest reminder Pacquiao hasn’t gone anywhere yet. He’s aged. He’s not old yet.

At least, not too old to still be Manny Pacquiao. 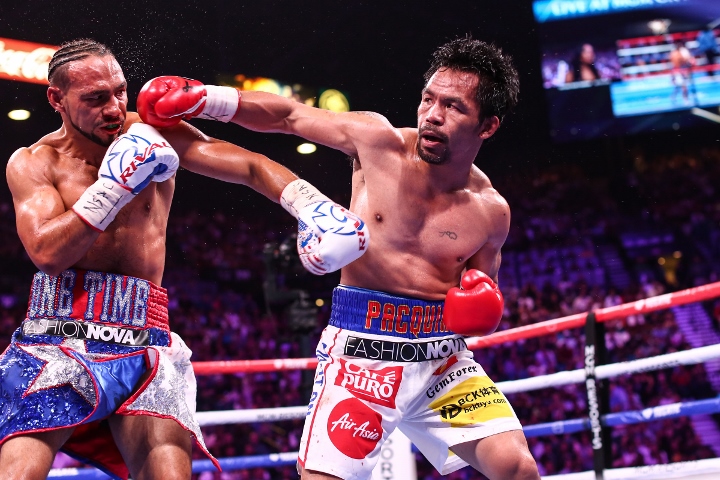 The Future for Pacquiao: Until he finally does make the proverbial dive into palookaville, the safest thing to do with Pacquiao might be this: ask if one would have picked the opponent at hand against Pacquiao a decade ago. Pacquiao can still go and what he’s lost in physical step he makes up for with fitness, still excellent reflexes, and ring intelligence refined over two-plus decades. That’s still too much for most. Terence Crawford? Errol Spence? They might have been hell on Pacquiao at any point in his career and while there may be enough money for a Spence fight eventually that doesn’t look winnable even in the glow of the Thurman victory. That doesn’t mean there aren’t other competitive fights for the new WBA titlist. Spence is busy with Shawn Porter anyways. Under the PBC umbrella, Danny Garcia is without a dance partner. Pacquiao-Garcia could be every bit as entertaining as the Thurman fight and would be another quality younger foe who would run Pacquiao hard. This is all moot if Floyd Mayweather decides to come back for a rematch. Maybe it happens. Maybe it doesn’t. For now, Pacquiao can take a rest with his best win since at least the rubber match with Timothy Bradley. It’s always a joy when the great ones do great things when many are counting them out.

The Future for Thurman: After losing almost two years to an injury, Keith Thurman was somehow pegged reluctant by a corner of the boxing universe. This was a guy who went to war with Porter and didn’t shrink from a unification clash with Garcia. Getting up off the deck in the first round wasn’t the most impressive thing Thurman did this weekend. Surviving a staggering body shot in the tenth round might have been. Thurman was hurt, he was tired, his momentum was broken in a fight where he was coming from behind. Thurman could have folded but he did not. He endured, fought forward for two more rounds…and it wasn’t enough.

Iran Barkley won titles in three weight classes but will always also be the last great chapter of the Roberto Duran story. Thurman will have more good fights and nights ahead. One of them could be a rematch with Pacquiao. For one night, he played a part in a larger legend. He’s still a top five welterweight in the world in 2019 and is an integral part of the deep PBC welterweight stable.

[QUOTE=lacson;19928911]Pacquiao has been under vada for years. 365 days a year they can come anytime and test. I don’t think thurman is.[/QUOTE] Hell yeah, manny has always been tested negative for peds and steroids, only haters and floydsexuals hate on…

It was a great win for Manny, the fight was really great and entertaining, but props to Keith, he fought great too, but manny is on another level, I am a big fan of keith right now, the way he…

[QUOTE=marikudo;19928663]So, what rounds did Thurman dominate Pacquiao?[/QUOTE] I don’t think Keith dominated any round, and that’s why Many won 7 rounds on 2 of the cards. Punch stats show Keith out landed him, so he had to control some of…

[QUOTE=Mike D;19928415]Yeah I agree. I was kinda shocked after to see the majority of people talking as if it was a one sided beat down. Even Spence said it was an ass whooping. It was an extremely close, hyper competitive…