Eight division world champion Manny Pacquiao is less than a month away from his scheduled fight with undefeated WBA welterweight champion Keith Thurman.

The soon to be 41-year-old Pacquiao told the Manila Times that he's ready to fight Thurman right "now!" 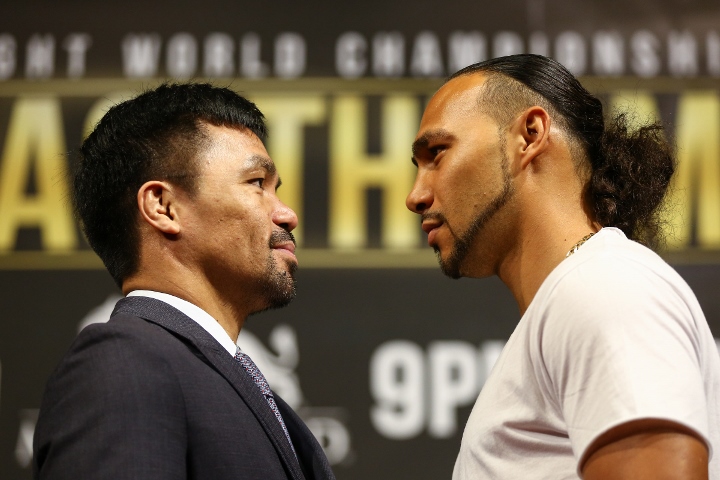 Thurman has stated in several interviews that he intends to retire Pacquiao.

The Filipino superstar is not worried, feeling very confident in his ability to walk away with the belt.

“They can bring the enemy today or anytime from now and face him off. I have been preparing for this fight for more than a month, dividing my time as a lawmaker and a fighter and I believe I’ve done enough to prepare myself, for the fight," Pacquiao said.

“Thanks to my trainers, who like me have been sacrificing their time and efforts to prepare me for this, one of the most important fights of my career as a fighter. But most of all I thank God for giving me, at my age, all the strength and resolve to continue serving Him in the best way I can."

Fortune is not surprised that Pacquiao feels ready, at the very moment, to get in the ring with Thurman.

“Manny’s been really very aggressive in this training camp and I’m not surprised if he, indeed, feels he can fight already this early,” Fortune said.

“That makes everything easy for us from hereon. That certainly reduced our problems to seeing to it that Manny doesn’t get sick or overtrained,” he explained.

[QUOTE=KillaMane26;19866817]Thats not why i said that...His legs looked older and his punches looked weaker. Teddy Atlas mentioned the same thing. Thats why i say he needs the right opponent to show this decline that me and others saw. Question is…

I’m pulling for Manny in this fight and subsequent fights to end his career on a high note. I am also hoping the opposite doesn’t happen, like it does with a lot of fighters, he gets seriously hurt and embarrassed.…

Runtime has to take the fight to Pacman if he wants to get a credible W. It's no use him feathering his way to a points win on the back foot. To hell with that. I wan't to see fireworks.

[QUOTE=RGJTMMRDCMJRJSM;19866827]That FightHub video where Thurman mentioned he has trouble finding sparring partners that would replicate Pacquiao..... Yikes! we are two weeks away... Boy....he's in a whole lot of trouble on July 20th...[/QUOTE] He doesn’t need a sparring partner all he…

[QUOTE=radiotracer;19866852]I’m so happy to read your quote. Please don’t make excuses after the fight.:beerchug:[/QUOTE] No excuses. Pacman gets his props should he win against Thurman. That's my own prediction. I just think Thurman has the tools to get it done.