Oscar Valdez’s days as a featherweight title are now a thing of the past, but present-day news certainly has his team excited for the future.

The unbeaten two-time Olympian from Nogales, Mexico made the hard choice to part ways with his 126-pound title earlier this month. The decision came after a purse bid was won by promoter Top Rank for Valdez to make a mandatory defense versus Shakur Stevenson.

Citing a lengthy struggle to squeeze down into a featherweight frame, Valdez opted to instead begin his campaign in the super featherweight division.

“I was already having a hard time marking 126 pounds, so climbing to 130 pounds will make me feel very good, without losing power,” noted Valdez (26-0, 20KOs) in ending his three-year stay as a featherweight titlist. “I want the best super feathers in the world. I want to fight (World Boxing Council 130-pound) champion Miguel Berchelt.” 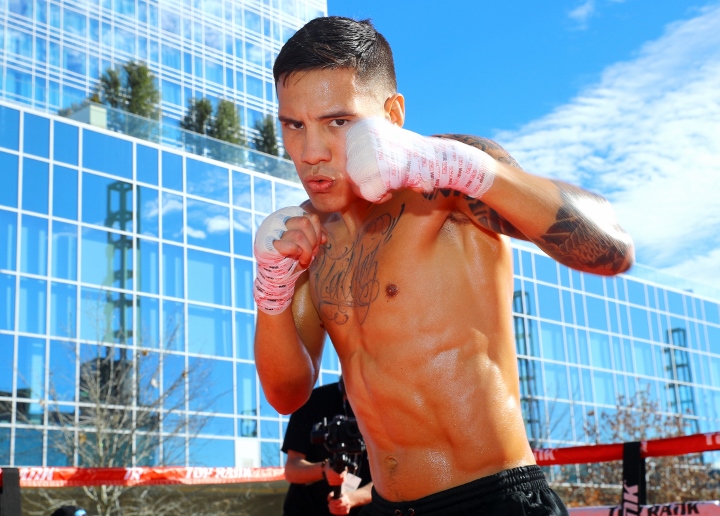 A major assist in realizing that goal came on Thursday, when the WBC announced Valdez as its number-one contender in the super featherweight ranking.

In addition to holding the WBC title, Berchelt (36-1, 32KOs) is the #1 ranked super featherweight according to Transnational Boxing Ratings Board (TBRB), ESPN.com and RingTV. The streaking knockout artist from Merida, Mexico—who has won 15 straight, all but one inside the distance—made his fifth and most recent title defense this past May, scoring a 6th round knockout of Francisco Vargas, whom he dethroned in Jan. 2017.

There’s certainly no better place for an incoming contender to start than at the top. Even if it’s not a straightaway title challenge, the short term goal very much remains a showdown with his countryman.

“Valdez is certainly looking forward to fighting WBC world champ Miguel Berchelt or any of the other world champions at 130,” insists Espinoza. “Oscar Valdez will be a two-time division champ soon and we look forward to the exciting fights on the horizon.”

[QUOTE=Squ□redCircle34;19975938]He didn’t stop Miura, maybe you need to stop watching boxing and go watch soccer or cricket cuz obviously you only watch highlights! Valdez is an excellent combination puncher and is learning to better utilize defense! Berchelt is very susceptible…

Valdez vs berchelt is a great fight if it happens.

[QUOTE=Elver Gota;19975765]Berchelt has beat Francisco Vargas, Takashi Miura, and Mickey Roman by KO and you think Oscar Valdez is scared Stevenson? You need to watch more Boxing.[/QUOTE] He didn’t stop Miura, maybe you need to stop watching boxing and go…

[QUOTE=Squ□redCircle34;19975685]Ducked Shakur for a more winnable fight for him basically! If a Frampton fight or Warrington fight would’ve came up he’d hired 2 nutritionists! Don’t matter, Shakur once he cleans up 126 he’ll be at 130 and clean up that…