Manager: I Think Berlanga Is The Next 'Tito' Trinidad; He’s The Total Package

Brooklyn’s Berlanga and his handlers obviously realize that he remains a world away from being mentioned in the same sentence as Felix Trinidad or Miguel Cotto. He is off to an astonishing start to his pro career, however, with 15 straight first-round knockouts. 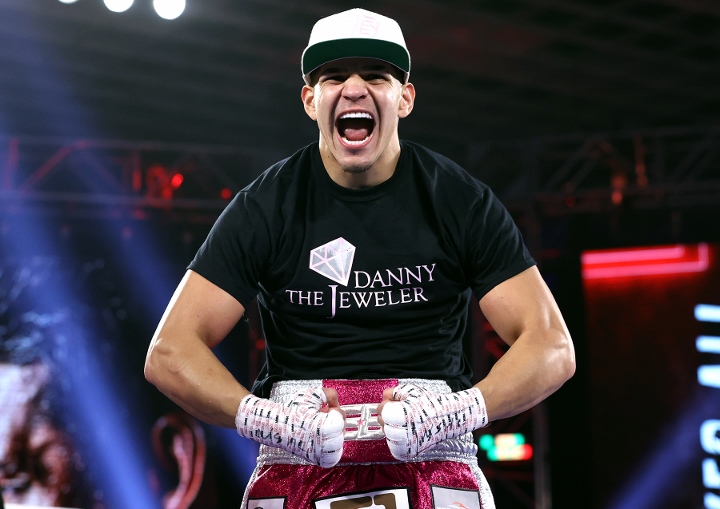 Berlanga added Las Vegas’ Lanell Bellows to his list of conquests Saturday night. He needed just one minute and 19 seconds to hurt and stop Bellows (20-6-3, 13 KOs, 1 NC), who was still standing when referee Robert Hoyle halted the action.

“Honestly, I think he’s the next ‘Tito’ Trinidad,” Connolly, Berlanga’s manager, told BoxingScene.com. “With every fight, I’m starting to believe that more and more. And, you know, he wants to have that pressure on his shoulders. He wants to be the next popular Puerto Rican fighter that packs The Garden before the Puerto Rican Day Parade [in June] and one other time each year. I think he’s got all the tools to do that. He’s good-looking, he’s got charisma, and he can knock people out. So, I think he’s the total package.”

More viewers than ever watched Berlanga blast out another opponent Saturday night, as his victory was part of the Teofimo Lopez-Vasiliy Lomachenko undercard at MGM Grand Conference Center.

Bellows, 34, officially lost by knockout for the first time. Mike Sniders knocked out Bellows in the third round in June 2017, but that result was changed to a no-contest by the Nevada State Athletic Commission.

“I was hoping [Bellows] was gonna give him three or four rounds,” Connolly said. “I wanted the KO streak to keep going, but I didn’t care if the first-round KO streak kept going. But you know what? I’m proud of him. I know he, personally, wanted to keep it going. And, you know, there was no reason to carry the guy if he hurt him. So, he did what he always does. He’s probably one of the best finishers in the sport. Even though we’re going against lower-level guys, you could just tell he has that type of ‘it’ factor, that when he gets a guy hurt, he’s gonna finish him.”

Bob Arum’s Top Rank Inc., Berlanga’s promoter, plans to bring him back to ESPN’s airwaves relatively quickly. Berlanga (15-0, 15 KOs) is expected to return to the ring December 12, as part of the Miguel Berchelt-Oscar Valdez undercard at MGM Grand Conference Center.

“The plan is December, and then probably in March,” Connolly said. “And then the big one, the day before the Puerto Rican Day Parade [in June]. We already have it lined up with Madison Square Garden. We have the Theater on hold, if we can get fans by then. And depending on how things go, you never know, the Garden wants it in the big arena if there’s not a professional sports team in there that night. So, we’ll see how it goes.”

[QUOTE=Rick Taylor;20834091]everything you said is wrong. except roid jones having a glass chin is that a question kid?[/QUOTE] Yet, you prove nothing. An emoji using person call someone a kid? As, I said Tito has a very weak chin. Dude…

[QUOTE=IRONCHINHAGLER;20831806]Looks like the real deal...too bad it looks like He will be stuck between the so called “glamour” divisions of welterweight/Middleweight and Heavyweight. Will probably b a LHW as He matures.[/QUOTE] slow plodding bum with a padded record LMAO fake…