When four division world champion Mikey Garcia targeted IBF welterweight champion Errol Spence as his opponent of choice - he said he "saw something" which made him very confident of beating Spence.

And while many felt the contest was never going to happen - now it's only a few days away.

Garcia will challenge Spence on Saturday night, at AT&T Stadium in Arlington, Texas. 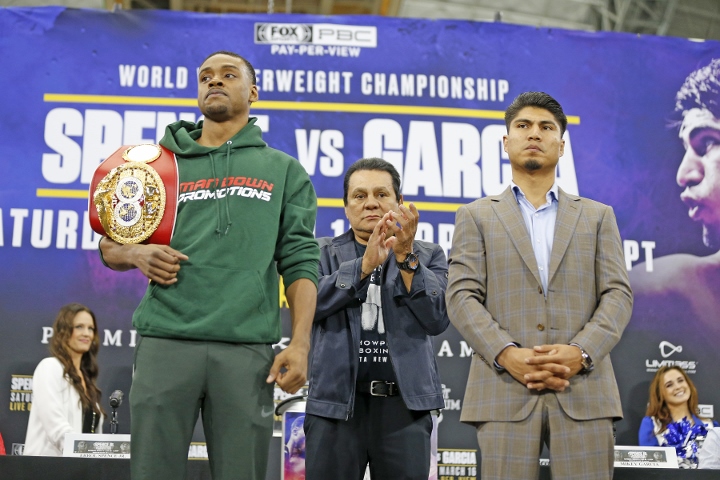 Former two division world champion Paulie Malignaggi, who fought at welterweight and also at junior welterweight, has no idea what Garcia sees as far as the flaws in Spence.

“I am not sure as to what Mikey sees,” Malignaggi said to Premier Boxing Champions. “He is obviously very confident. But Mikey is a very good fighter, and I think he will make a go of it. But can he create doubt in Spence by hurting him? Mikey is certainly good, but can he get that respect?”

“[Garcia] can win sure, but it will be very tough. Mikey must try to take the least amount of damage possible in the early rounds, while winning them or winning most of them. If he is taking heavy shots in the first half of the fight, even if he is competitive, I cannot see him lasting.”

Veteran trainer Ronnie Shields is also on the same mindset, and has no clue what Garcia sees as far as the vulnerabilities in Spence.

“I don’t see what Mikey Garcia sees,” said Shields. “Errol is a big welterweight and flawless as a fighter. He jabs well, he is a strong puncher, and he is an effective body puncher. Mikey is a good boxer, but not better than Errol. Errol is a big strong southpaw rarity like a Marvin Hagler.”

He saw them but couldn't do anything about it :(

[QUOTE=champion4ever;19583148]I can teach the sport of boxing if you want me too.[/QUOTE] I am sure Mikey can use your help! How do you like that GREEN! Next time make sure you know what you are talking about before stepping up…

[QUOTE=JWHardin;19587127]I hope he does go hard at MG from the start. I think looking back he started too slow against Brook. MG will be looking for some big time counters to get Errol's attention. If he does, its going to…

Spence is a world level welter but i dont see much elite skill about him.

[QUOTE=Bronx2245;19581626]And that's the million dollar question? Is Mikey that smart? I know Mikey has a very high Boxing IQ. In fact, I love the way he carries himself both in and out the ring! However, I don't think Errol is…