The Showtime analyst is impressed by Santa Cruz’s insistence on fighting a younger, stronger Gervonta Davis in a weight class that’s not optimal for the four-division champion. Malignaggi just wishes Santa Cruz instead would’ve remained at featherweight and figured out a way to finally fight Gary Russell Jr.

Russell (31-1, 18 KOs), the WBC’s 126-pound champion, and Santa Cruz (37-1-1, 19 KOs) both have repeatedly stated that they want to fight each other. They also have blamed one another for that long-discussed featherweight fight never coming together.

“I think I’d rather see Santa Cruz-Russell, myself, than Santa Cruz-Davis,” Malignaggi told BoxingScene.com. “From a pure boxing standpoint, they’re both in the same weight class and it’s an excellent style matchup, where you have one guy who boxes very well, but doesn’t mind throwing big combinations. And the other guy who’s always coming forward, looking for a fight. I’d rather see that fight. I think Russell has been completely underestimated throughout his whole career, as far as what could’ve been done with the guy, putting him in some big fights and marketing him a certain way.

“But, you know, Russell also has to be more demanding of it, and he hasn’t been more demanding of it until the past year. So, let’s see. I think Russell is one of the more talented guys in boxing, as I think Santa Cruz is as well. If it was a Santa Cruz who was more Davis’ size, it would be much more intriguing to me, personally.” 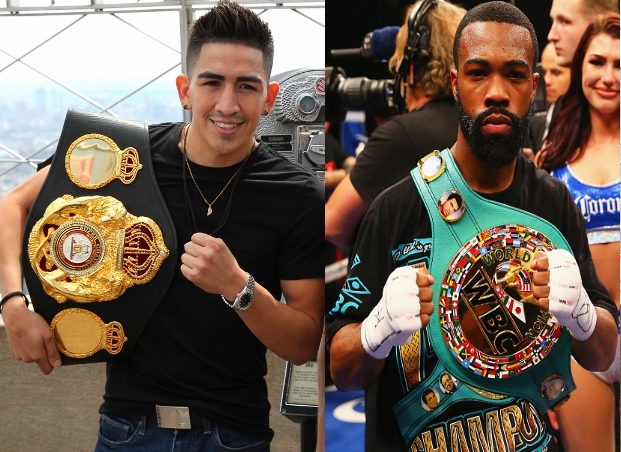 The 31-year-old Russell has been very vocal during the past year about not only wanting to face Santa Cruz, but Davis as well. Russell, boxing’s longest-reigning male champion, has even said he’d jump up from featherweight to lightweight to battle Baltimore’s Davis (23-0, 22 KOs).

The 25-year-old Davis will move back down from the lightweight limit of 135 pounds to 130 for their Showtime Pay-Per-View main event later this year. The date and site of Davis-Santa Cruz will be determined once the COVID-19 pandemic ends.

Used to be that cleaning out your weight class wasn’t an option. Still have more respect for those fighters that try to do so. If you can’t even show an effort to prove you are the best in your weight…

Santa Cruz has ZERO advantages vs either and I can't realistically see him beating either but because there would be no size difference in a Russell Jr fight, that would be my preference.

Well of course Russell is the longest reigning champ, he only fights once a year. I agree with Paulie, Russell vs Santa Cruz is a way better fight. Still Ford pinto Davis can't make 130. I'll be surprised if this…

We all would but Santa Cruz has sold out for money willing to put his head on the chopping block to make Davis a star. Same as Mikey did for Spence. Expect Davis to not make weight and knock Santa…

Would absolutely love to see this one instead. Porky has too many options at LW to try and weasel his way into fighting a guy 2 weight classes below him. Porky does all that barking on Twitter only to not…