The two fighters battled to a majority draw in a fight that saw Vargas be the busier fighter early on and Broner coming back late to get the draw.

Both fighters after the fight in the ring seemed to want to rematch each other. 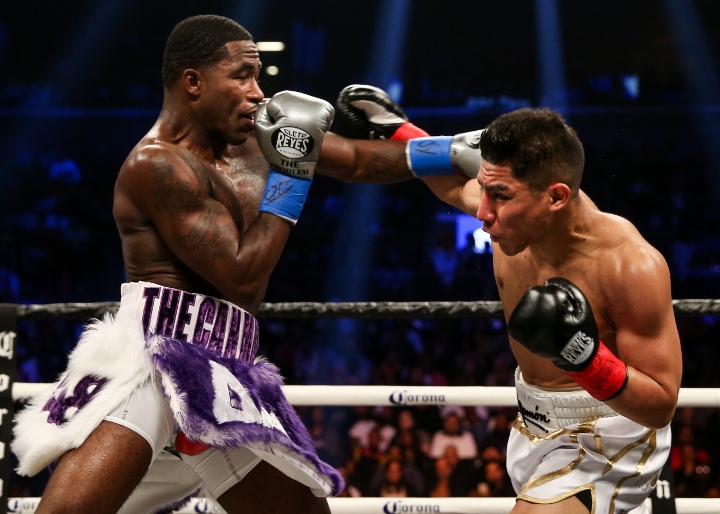 They weren’t the only ones to want to see themselves square off in the ring again.

Showtime commentator Paulie Malignaggi who called the fight think the next logical step for both fighters is to fight again.

“Jessie (Vargas) fought a good fight and I definitely want to see a rematch,” Malignaggi told BoxingScene.com. “In 2018 you don’t have to worry about getting robbed with Broner as much as 2013 when everyone thought he was the next Floyd Mayweather. I think the right move would be to make these guys fight again.”

Malignaggi was impressed with what both guys did within different parts of the fight.

“Adrien was able to get back into it,” stated Malignaggi. “I think people are going to be interested in the rematch. I thought the decision was pretty fair. I thought Jessie was outworking him early and it looked like the typical Broner fight where Broner wasn’t throwing enough punches. Broner then started walking Vargas down like he did in my fight. He walks you down without throwing punches.”

Malignaggi was particularly impressed with the pressure Broner put on Vargas in the later rounds.

“A lot of times you feel like you have to get shots off against Broner,” explained Malignaggi. “He’s forcing you to feel that mental pressure and forcing you to throw getting you tired and then he picks his spots and does good work. He can’t do it to the bigger guys but to Jr. Welterweights like me and Jessie, he can.”

Malignaggi feels the change to trainer Kevin Cunningham also had a positive effect on Broner.

“Kevin Cunningham impressed me. He chewed Adrien out at times and I was impressed at Adrien listening and responding well to him. Adrien was lackluster at times and Kevin forced him to be busy. He’s a skilled fighter but when he’s busy he’s a better fighter.”

[QUOTE=The Conundrum;18704406]Bro what makes you think Baranchyk is gonna fight Broner next? Broner is not in line for the IBF title shot, Baranchyk will be facing either anthony Yigit or Josh Taylor for the vacant IBF belt looking at the…

[QUOTE=Bronx2245;18702061]This fight was pointless, and so would the rematch! If AB wants to fight @ 144, he should fight Pacquiao! He should've never turned down the chance to fight Pacquiao a few years ago! Broner vs. Baranchyk @ 140, Vargas…

This fight was pointless, and so would the rematch! If AB wants to fight @ 144, he should fight Pacquiao! He should've never turned down the chance to fight Pacquiao a few years ago! Broner vs. Baranchyk @ 140, Vargas…

[QUOTE=jinx_htx;18701689]I don't want to see a rematch between those two. Vargas has no power, at least not for Broner who has a solid chin. If lazyass Broner would've let his hands go more he probably would've stopped Vargas. I'd rather…

pbc puppet selling the rematch. I did not care about the first and I damn sure don't care to see a rematch.