In the wake of the tragic death of another boxer on Wednesday, a number of ideas have been put forward on how to make the sport safer, from increased drug testing to mandatory MRIs to health insurance for all fighters. These are all good ideas and should be implemented.

The more protections for the fighters the better.

But what about in-ring safety measures when the fight is taking place in real time? Much should be done outside of the ring to protect fighters. How do we protect them while the bout is taking place?

Patrick Day, 27, succumbed to brain injuries sustained in a junior middleweight bout on Saturday against Charles Conwell and died on Wednesday, his promoter, Lou DiBella said.

DiBella, in his beautiful statement on his passing, praised Day’s generosity and kind spirit. He also framed his death as a “call to action” to make the sport “safer for all who participate” as a way to honor Day’s legacy.

It’s a daunting challenge since boxing is inherently violent, but if reforms can save a life, then they’re surely worth it.

So how do we make the sport safer? What can be done that will have an immediate impact? That may prevent a fighter who is clearly hurt from taking that final blow that can lead to serious injury?

Perhaps it’s time to bring back the standing eight count.

And direct referees to stop fights much earlier when it’s clear a boxer has little shot of winning, barring a miracle punch.

Both of these ideas are controversial answers to this difficult question, but perhaps something radical is necessary given that four boxers have died in 2019.

Watching the replay of the final seconds of Day’s bout with Conwell, it seemed apparent that Day was hurt by two right hands that caused him to stagger across the ring, trying to maintain his equilibrium in the tenth round.

Conwell then connected with a vicious left that dropped Day. The whole sequence happened quickly. The referee waived the fight off and Day was immediately tended to by medical personnel. 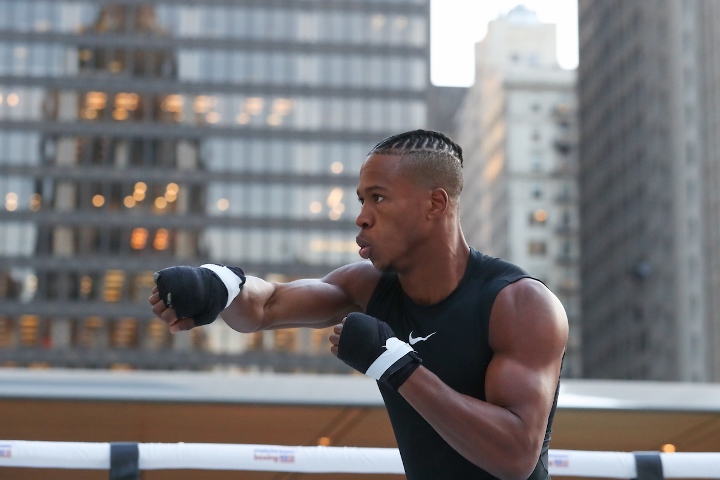 There is no one to blame in this situation. As has been reported, everyone did their jobs to the best of their abilities in the course of the fight and after, from the trainers, to the referee, to the commission doctors to provide Day with the best care possible.

But what if the rules were different? What if the standing 8 was in effect? Or if referees had the mindset to stop fights earlier. Would it have affected the outcome?

Perhaps the referee could have intervened after those two right hands and stopped the action before the final left to administer the standing eight to give Day a moment to recover if the rule was in effect?

The flurry of punches happened so quickly that maybe asking the referee to jump in at that moment is asking too much.

As to stopping the fight earlier, Day was firing back and competitive throughout, so that wasn’t really an option, either.

Some may say, what’s the point of this discussion? The damage has been done. A life has tragically been lost. But maybe a change in the rules and in the mindset of stopping fights earlier will save the next fighter?

Larry Hazzard Sr., who has spent 50 years in the sport as a referee and government administrator and is the Commissioner of the New Jersey State Athletic Control Board, said he is in favor of bringing back the standing 8 count in the interest of safety, but only if it’s applied consistently.

The standing 8 is also known as the protection count because of the halt to the action that takes place after a fighter has been hurt.

“Theoretically, it’s worth a try if it will make the sport safer,” Hazzard said in a phone interview, speaking generally because he did not see Day’s bout with Conwell. “I certainly would be all for it if we can establish consistency.”

Hazzard said the issue with the standing 8 back when it was part of boxing was that referees couldn’t be counted on to issue the rule evenly. Some fighters seemed to be penalized by it while others, who were taking the same punishment in the same fight, were not.

“When you don’t have consistency, sometimes there could be instances when it’s not fairly used,” he said.

Hazzard also bemoaned the volume of standing eights that were at times administered, interrupting the momentum of the fights, so that bouts were stopped every time someone got hit cleanly, reminiscent of the amateurs.

“That’s what made it so unpopular sometimes,” he said. “But again, if it can be administered uniformly and it helps make the sport safer, then I’m for it.”

Ron Scott Stevens, a former promoter, matchmaker and chairperson of the New York State Athletic Commission and now a judge based in Southern California, said the problem with the standing 8 is that sometimes it had the effect of prolonging the amount of punishment a boxer absorbed. “You interrupt the action to allow him to recover and then allow him to take more punishment,” he said in a phone interview.

What is needed, he said, speaking generally of the sport, is for referees to have the confidence to stop fights earlier, saving the fighter from taking too much punishment. “What referees are going to have to start doing, if they really want to keep fighters from getting hurt, is to stop fights sooner rather than later,” Stevens said. “I don’t see any other way around it.”

Stevens even suggested allowing referees to be privy to the scorecards so if a fight is totally out of hand from the judges and one fighter is taking too much punishment, the referee can arbitrarily stop the fight, knowing the boxer has almost no way of winning except for a miracle punch.

Stevens cited Manny Pacquiao’s one-sided beatdown of Antonio Margarito in 2010 when Margarito suffered a broken orbital bone in the course of getting pummelled over 12 rounds. “That fight should have been stopped,” he said. Both Pacquiao and his trainer Freddie Roach said the same. Instead, Margarito was allowed to go the distance.

“Stop the fight based on safety concerns,” he said. “Especially if it’s past the seventh or eighth rounds. The referee will get booed and the fans will be unhappy. If early stoppages become a steady diet, the sport will lose some of its attractiveness.”

But perhaps it will save a life.

Hazzard and Stevens also brought up the need to have a uniform set of medical standards for all the commissions established through federal legislation, which is absent, and also the need to allow ringside physicians to have the power to stop fights themselves in every jurisdiction, which they do not currently have. “Those would be steps in the right direction,” Hazzard said.

[COLOR="Red"][FONT="Comic Sans MS"]I definitely disagree with the second recommendation. Let it be known, 'wraps condemns it! What I would be in favor of, is shorter rounds in a fight. It can still be a chess match, and no it doesn't…

[QUOTE=Eff Pandas;20137151]Its worse for the brain to receive damage in close proximity to previous damage is the thing. So "saving" a guy feom getting ktfo in the 2nd round with a s8c only makes the damage & liklihood of death…

[QUOTE=Ajvar;20137015]I see it the way that without S8KD: - either imminent KTFO coming, not just a KD but a punch into non-resisting person... - or referee calls TKO where fighter got hurt in a fight for nothing, where some boxers…

[QUOTE=Eff Pandas;20135320]I think a S8C isnt a great idea, outside of the times a fight is ended during the S8C, cuz what you are doing most of the time is ending brain trauma & maybe seeing a concussion & then…