Magdaleno: Whatever Dulay Had To Offer, I'd Have A Response

NASHVILLE—Diego Magdaleno always had a plan to pull the crowd from Austin Dulay, one that went well beyond his two-stepping his way into the ring.

The former two-time title challenger breathed new life into his career following an upset win on the road, outpointing the local lightweight over 10 rounds. A competitive fight early gave way to a strong surge by Magdaleno, including a 7th round knockdown which gave the Las Vegas-bred southpaw a clear win Saturday evening at Bridgestone Arena in Nashville, roughly 30 minutes south of Dulay’s Hendersonville hometown.

“He had the support behind him, but that all changes once you get in the ring,” Magdaleno (32-3, 13KOs) told BoxingScene.com of his plan to take the crowd out of the fight. “That was my goal, changing his whole mind frame and the pace of the fight.

“That’s what we worked on with (former 122-pound titlist and current head trainer Clarence) ‘Bones’ Adams all through training camp.” 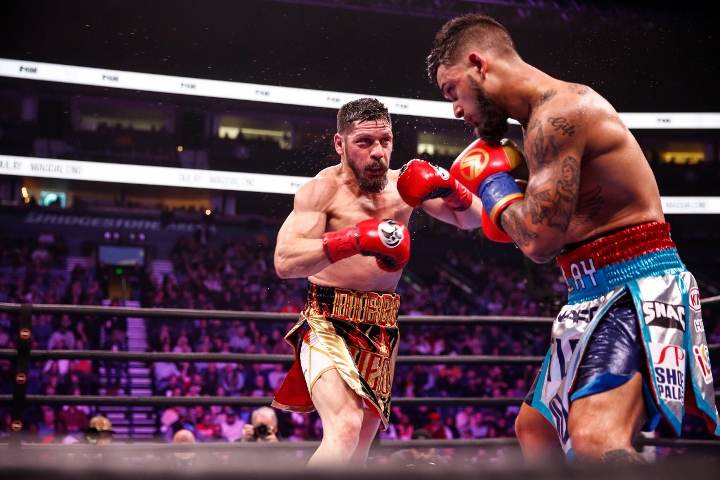 Magdaleno remembered to have fun in the role of the underdog, making his way to the ring to Blanco Brown’s underground country classic ‘The Git Up’, complete with a cowboy hat accompanying his attire. Fortunately, what mattered the most was how he performed in the ring, although he attributes his clear mindset in and out of the ring to a key stablemate.

“It was fun and challenging, sparring and training with someone as exciting as Blair ‘The Flair’ Cobbs,” Magdaleno said of the charismatic unbeaten welterweight, who picked up a win of his own one night earlier in Anaheim, California. “It was inspiring.

“Considering how well I did against someone two divisions heavier than me, I knew I was in the right place for this fight.”

The win also puts him in the right place in his career.

“It felt good to get that win,” admits Magdaleno, who hadn’t fought since a knockout loss to Teofimo Lopez a year ago, and whose last victory came 17 months ago. “I knew we put in the work to guarantee this would happen. The kid (Dulay) had the crowd, but there's no (substitute) for experience.

“My last fight (versus Lopez), I got out of my head and never gave myself a chance. This time, I knew no matter what (Dulay) had to offer, I'd have a response.”