To this day, Alberto Machado still doesn’t quite understand how he went from the World Boxing Association’s “Super” champion at 130 pounds to its “Regular” titlist without having lost or even endured an inactive period in his young career.

Adding insult to injury, his upcoming title defense versus Andrew Cancio—which will air live on DAZN from Fantasy Springs Casino in Indio, Calif.—comes on the same night as “Super” champion Gervonta Davis’ first title defense versus Hugo Ruiz, which will take place on Showtime and roughly 2 ½ hours west in Carson, Calif.

Regardless of how the alphabet mess reached that point, Machado remains grateful of any opportunity he’s received and continues to be granted in the ring.

“I am more than ready to make the third defense of my world title,” Machado (21-0, 17KOs) said of Saturday’s headliner. “We had a great training camp in Los Angeles and I want to thank Freddie Roach and my longtime coach Juan DeLeon for making me better each day.” 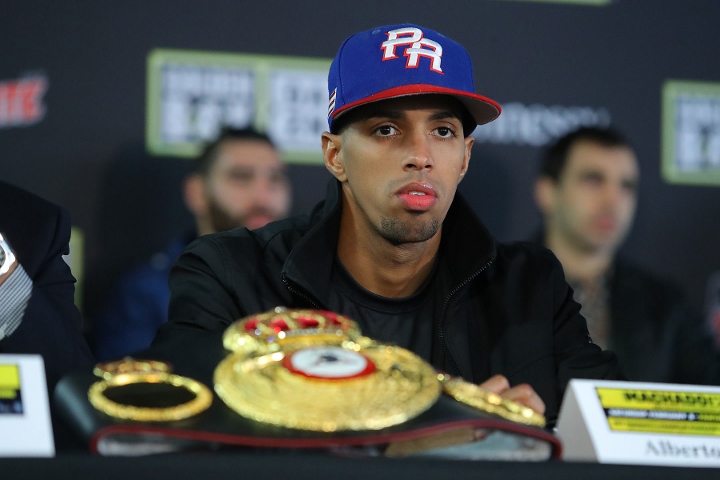 There is a case to be made that Machado is as good as they come in today’s 130-pound market. He’s certainly no worse than right alongside Miguel Berchelt, with fellow title claimants Davis, Masayuki Ito and Tevin Farmer also having their say.

The unbeaten Puerto Rican first plead his case in a stunning 8th round knockout of Jezreel Corrales in Oct. ’17, climbing off the canvas to win his portion of the 130-pound crown in the process. The bout aired live on HBO, as did each of his two title defenses, including an explosive 1st round knockout of Yaundale Evans last October in New York City.

Saturday’s showdown versus Cancio (19-4-2, 14KOs) will mark his first on a new platform, as Machado is one of many boxers who will benefit from co-promoter Golden Boy Promotions’ long-term deal with DAZN.

“I fulfilled my dream of fighting in a world title fight live on HBO,” Machado noted of his rise to fame and those along for the ride. “I believe it’s very important for my people in Puerto Rico that I’m headlining on this new platform on DAZN.”

His alignment with the streaming service could leave him running thin on top competition. The only other 130-pound titlist on DAZN is Farmer, who faces Jono Carroll on March 15 in Philadelphia. The bout will mark his fourth title fight in less than eight months, emphasizing the rate of activity that comes with the surplus of DAZN dates.

Of course, the trick is to look the part of the go-to guy in the division in enticing the remaining top talent to look your way.

What little leverage he’d hoped would come from serving as a “Super” champion apparently disappeared the moment Corrales—the defending champ at the time and who carried the “Super” label following his knockout of Takashi Uchiyama in the first of their two fights in 2016—missed weight by more than three pounds. Machado remained eligible to fight for the title, but its status apparently downgraded to “Regular” by fight night.

It left the door open for Davis (20-0, 19KOs) to claim the “Super” label, which the WBA attached in his 3rd round knockout of Jesus Cuellar last April. The unbeaten southpaw is a heavy favorite to retain that status versus Ruiz in his first main event on Showtime, with whom he is aligned in fighting under the Premier Boxing Champions umbrella.

On the ESPN side comes the remaining titlists. Berchelt, whose upcoming rematch with Francisco Vargas has been pushed back from March 23 to May 11, and Masayuki Ito who is tentatively scheduled to defend versus Jamel Herring (pending WBO approval) on May 25.

Before he need worry about his competition atop the division, however, all of his focus remains on the man who will be staring him down this weekend.

“I know that Cancio is well-prepared and anxious to take my title,” acknowledges Machado, “We trained as if we are the challengers coming here to take the title from my opponent.

“I’m more than ready to put on a great show this Saturday and defend my title for all of Puerto Rico.”

[QUOTE=BOXING-SCRIBE;19499271]Machado is another bum..he fights small men that have always been defeated..his only strength is his size[/QUOTE] [QUOTE=BigStomps;19499716]LoL, you really don't know shet about boxing and you hating![/QUOTE] Apparently he does lad

[QUOTE=BOXING-SCRIBE;19501998]Point proven. Learn to pledge allegiance to yourself first...type of guy that looks up and down before crossing the street lol and tell everyone else they are wrong..your own shadow probably don't trust you. You know what I am talking…

[QUOTE=BigStomps;19501969]Shut up Punk![/QUOTE] Point proven. Learn to pledge allegiance to yourself first...type of guy that looks up and down before crossing the street lol and tell everyone else they are wrong..your own shadow probably don't trust you. You know what…

[QUOTE=BOXING-SCRIBE;19501962]😑 Big stomps has been demoted to lil steps. Lol. Breathe, think about what you are going to say before you say it. Calm, breathe,think, then type. Make sure your comments make sense and do not involve petty name calling…

[QUOTE=BigStomps;19501937]Yeah sure you did... And 6 minutes later he gets knocked out and you expect me to be looking on here every minute just to see if you wrote me huh,... You fool! Just be quiet![/QUOTE] 😑 Big stomps has…