Lyndon Arthur set up a fight with Anthony Yarde, which could take place in October, as he made a first successful defence of his Commonwealth light-heavyweight title, boxing his way to a unanimous points decision over Dec Spelman at the BT Sport Studios in London.

Arthur dominated throughout, boxing off the backfoot and showing an impressive array of punches. Spelman came forward throughout, but Arthur was more than happy drawing the sting from the challenger and punishing him when he got too static.

Arthur had been due to face Yarde in April, on the same card as Daniel Dubois was supposed to face Joe Joyce, but that has been on hold because of the coronavirus pandemic. 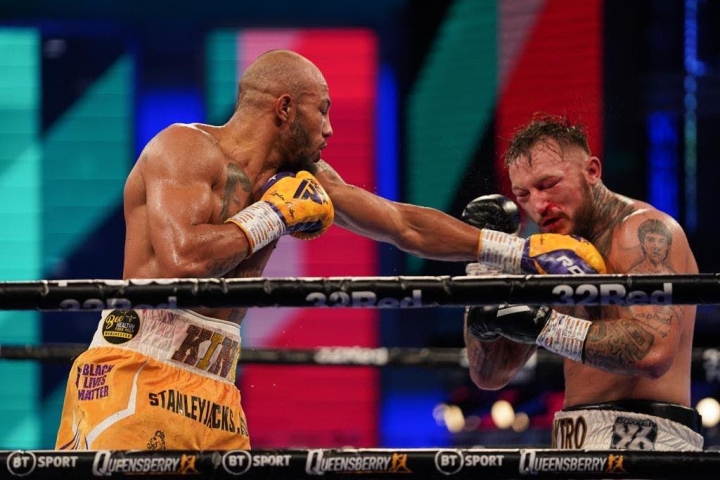 If this was simply a tune-up, it worked perfectly for him. In many ways, Spelman was the perfect style for Arthur. In the early rounds, he was happy to box on the back foot, landing a pawing left jab or lead right into Spelman’s face. But when backed up on the ropes, Arthur’s work really excelled, switching from head to body well and picking his way through Spelman’s defences.

Spelman was never really disheartened, but what success he had was fleeting. He landed a few clubbing hooks, but then found Arthur out of range when he tried to follow up. When Arthur did stand and fight, he looked impressive, switching stances, trying different shots constantly.

The decision was unanimous, Mark Lyson and John Latham gave Spelman credit for his effort, making Arthur the winner by scores of 116-112 and 116-113 respectively. Terry O’Connor gave Spelman no sympathy with his score of 119-109. Howard Foster refereed.

“He said he was going to be tough and stay in there for the 12 rounds,” Arthur said. “I wanted to get him out of there, a few times I hurt him with the body shots, but I hurt my hand in one of the early rounds on his head and I just boxed. It’s good experience, another 12 rounds in the bank, I proved I can box 12 rounds at a pretty decent high pace.

“I think I boxed well, 7 out of 10 maybe. I could have got him out of there if I had pushed a little more. He looked like he was going to be in there for a long time, so rather than try and get him out and just tyre myself out, I just boxed to a nice victory.”

Nick Ball shrugged off a big height disadvantage as he dominated Jerome Campbell over eight rounds to extend his unbeaten record to 13 fights.

The Liverpudlian set a furious pace and kept it going for the whole fight. Campbell had an unbeaten record of his own going into the fight, but he struggled to keep Ball off him.

Ball loaded up a bit too much at times, but was always on top and gave Campbell a count in the seventh round, when the Londoner fell back against the ropes. Referee Mark Lyson scored it 79-72 in Ball’s favour.

“It was good to get the rounds in, because I have never done eight rounds before, but I felt I wasn’t sharp, I didn’t feel like my full self in there,” Ball said.

“No disrespect to him, but I should be getting guys like that out of there if I want to go one to do better things.”

Lyndon looks chinny but is hard to hit flush Yarde gonna have problems he is way too tall for him and can see him being pulled out. I hope I am wrong because Lyndon is boring to watch undercard was…

Fell asleep watching that Winky Wright wannabe. Will root for the TBA every single time.

118-110 Arthur for me. Clear and easy win, never had to get out of 2nd gear. They are really trying to sell the idea of Yarde vs Arthur next. That's OK I guess, but WTF happened to Yarde vs Burton?…