The streaking middleweight from Dublin, Ireland came up big in a 10-round points win over Milwaukee (Wisc.)-bred Luis Arias in their crossroads bout Saturday evening in Belfast, Northern Ireland.

Referee Steve Gray was the lone scorer of the contest, turning in a card of 96-91 in favor of Keeler, who scored two knockdowns. Both boxers were also deducted one point each for separate fouls. 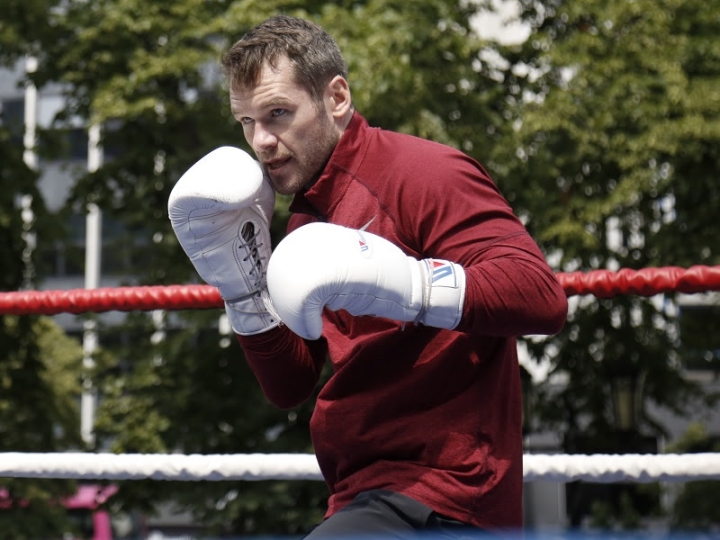 Keeler couldn’t have asked for a stronger start to the bout, dropping Arias less than a minute into the opening round. A chopping right hand on the inside had the American middleweight briefly stunned, with a compact left hook forcing him to the canvas.

Arias beat the count and rode out a right hand shot late in the round to come back strong in round two. The visiting foe was dealt his frustrations by referee Steve Gray, who discouraged his attempted body attack by issuing low blow warnings for what were actually beltline shots.

The ruling wasn’t out of of bias, as Gray had plenty to say to Keeler as well. The Dublin native was warned for illegal use of his head as well as for a rabbit punch late in the round. Calmer heads prevailed from there, with Keeler regaining control and in particular forcing a furious pace in round four after being put on the defensive by Arias one round prior.

Just when he thought he was out of the clear, Keeler found himself right back in a firefight in round five. Arias rode out an early flurry to find center mass with a crushing right hand along the ropes, snapping back Keeler’s head. Frustration set in for the Irish middleweight, who was deducted a point for hitting while holding the back of Arias’ head.

The two-point round put Keeler in a hole he didn’t figure to be in midway through the contest, but did his best to live up to his Cool Hand Luke moniker. A strong round six not only won him the frame but proved to be a huge momentum swing. Keeler enjoyed an equally strong round seven, save for the occasional right hand from Arias who never wilted but quickly fell back behind.

Round eight saw a return to the two-way action which highlighted the entertaining first half. Arias pressed forward in his best effort to swing the fight back in his favor. He was overzealous in such pursuit, instead digging himself deeper in a hole. With the two tied up on the inside, Arias ignored the referee’s command to break, instead clipping Keeler with a right hand to his left ear.

The infraction cost him a point, further impacted by the opening seconds of round nine when he hit the deck for a second time on the night. Arias charged forward but left himself open for a short right hand which caused his spill to the canvas. He won the balance of the round but it mattered little as he needed a knockout by that point to win the fight.

It never came close to happening.

Arias spent most of the 10th and final round charging forward but lacking any real strategy to pull off a miraculous finish. Keeler withstood the best his foe had to offer, remaining in the pocket and touching him with enough right hands to not give away the round. Arias spent the final minute plowing forward swinging at air, Keeler confidently slipping most of the incoming while his hands down by his waist.

Keeler improves to 17-2-1 (5KOs) and is now unbeaten in his last eight starts. Arias heads in the other direction, falling to 18-2-1 (9KOs) as he is now winless in his last three fights.

The bout served as the chief support to the celebrated homecoming of Belfast’s own Michael Conlan (11-0, 6KOs), a two-time Olympian and 2012 Bronze medalist who faces Argentina’s Diego Alberto Ruiz in the evening’s headliner.

[QUOTE=1hourRun;19960652]100%. Keeler robbed Arias, the ref deducted a point from Luis and Luke was gifted a bogus knockdown in the 9th. Arias is a fool for going over there anyways.[/QUOTE] No Elie, the Paddy won the fight because he was…

[QUOTE=knockoutkid;19959042]He could barely throw a punch, either his conditioning was really bad or it was the punches to the back of the head, if only the ref was scoring it then he was never going to win anyway. Bob Arum…

Arias looked good in beating Magomedov and he made Jacobs look bad in their fight. I thought he lost the Rosado fight, didn't see this one but I have an idea where he is in the landscape.

[QUOTE=knockoutkid;19959042]He could barely throw a punch, either his conditioning was really bad or it was the punches to the back of the head, if only the ref was scoring it then he was never going to win anyway. Bob Arum…