Underdog Australian contender Luke Jackson is out to create his own "real-life Rocky" story and snare a world title when he fights Carl Frampton for the WBO featherweight belt in Belfast on Saturday.

Jackson, undefeated in 16 professional fights, will lock horns with two-weight world champion Frampton, who is regarded as one of the best boxers on the planet.

The 31-year-old Irishman has lost only once in his 26-fight professional career and has been crowned world champion at both super bantamweight and featherweight divisions. 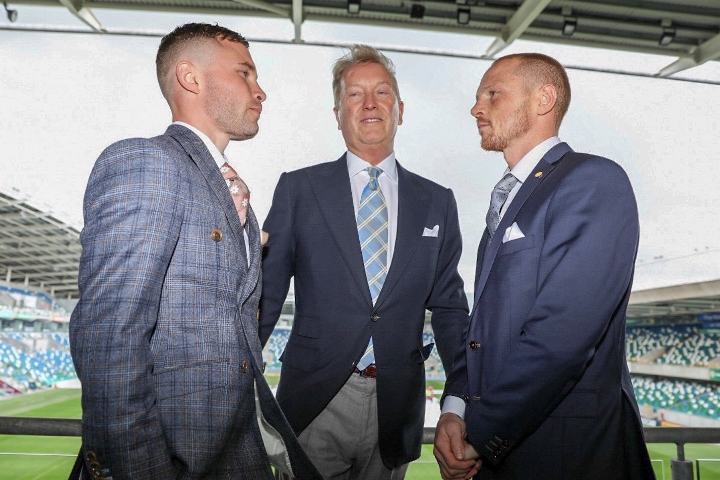 Jackson has a slight height and reach advantage but is a large outsider against his more experienced opponent, with the Tasmanian given odds by bookmakers of 20-1 to succeed.

Jackson accepts he is the underdog but remains confident of his chances.

"Of course he's the favourite and he deserves to be the favourite," he said. "But I don't really care. It's a fight, it's a 50-50 fight because its two people and we're going to go out there and try and win the fight.

"He's a very good fighter, I've said that from the very first press conference. I'm going to have go out and do something special to beat him. But I believe I can do that.

"Every fighter's got weaknesses, I've got weaknesses and so does he. It's my trainer's job to point them out to me, which he has in training camp and we've worked on it."

A bronze medal winner at the 2006 Commonwealth Games and a 2012 London Olympian, Jackson only turned professional five years ago.

The featherweight turned to boxing at the age of 18 to escape a difficult upbringing in Hobart.

"I had a hard childhood," he admitted. "I suffered with Obsessive Compulsive Disorder (OCD) for a long time and I feel that its helped me to become the athlete that I am. But also its come at a price because I've suffered a lot. It went undiagnosed for 28, 29 years of my life."

But now Jackson has the rare opportunity to join the ranks of past Australian world champions such as Lionel Rose and Jeff Fenech by recording a huge upset on foreign soil.

"It would be a dream come true," the 33-year-old said. "Something that I've worked very hard to get. It's a real-life Rocky story isn't it?

"I've just got to go out and win the fight now."

[QUOTE=1hourRun;19026877]If 'Action' Jackson is Rocky Balboa, then Antonio Tarver: Mason 'The Line' Dixon just jinxed Carl The 'Jackass' Fraudton by getting locked up for domestic battery.[/QUOTE] Carl the “jackass” Fraudton? Please tell me you’re no older than 12?

Quite a revealing interview with Jackson about his OCD and depression, really *****ed up Shyt!

If 'Action' Jackson is Rocky Balboa, then Antonio Tarver: Mason 'The Line' Dixon just jinxed Carl The 'Jackass' Fraudton by getting locked up for domestic battery.