Luke Campbell looks likely to be heading to the United States for his third attempt at a world title, despite his own promoter having the rights to the fight.

Campbell, the 2012 Olympic champion, has been matched with Javier Fortuna for the vacant WBC lightweight title. 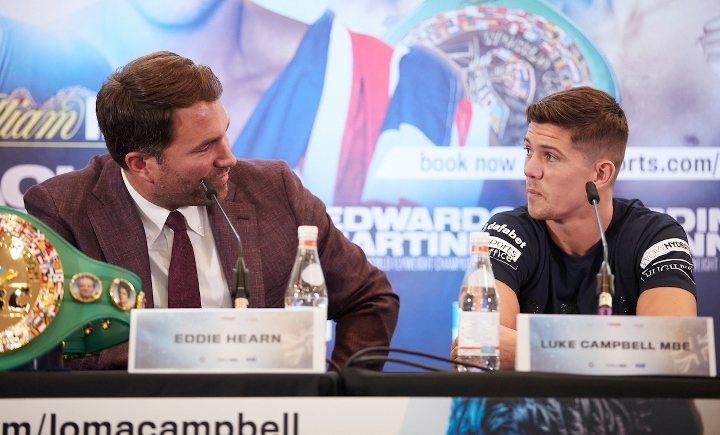 But while Eddie Hearn, Campbell’s promoter, has made an agreement with Sampson Lewkowicz, Fortuna’s promoter, for the fight, Campbell is unlikely to get home advantage with it being pencilled in for a Matchroom show in the US on April 25.

“We have agreed terms with Fortuna,” Hearn said. “We’d quite like the fight in the UK, but he does not want to leave America and I would rather have it on our show. So that will take place in America in April, possibly April 25. We are just finalising that.”

It will be Campbell’s third attempt at a world title, having lost a split decision to Jorge Linares in Los Angeles in 2017 and a points decision to Vassiliy Lomachenko in London last summer.

The title became vacant when, first, Lomachenko was named “franchise champion” by the WBC and then Devin Haney, who had claimed the belt, was named “champion in recess” after undergoing shoulder surgery.

Fortuna, the former WBA super-featherweight champion from the Dominican Republic, will be making his second attempt to win a world title at lightweight, having lost to Robert Eater Jr for the IBF title in 2018.

Hearn added that the April 25 show could also feature the much-anticipated women’s superfight between Katie Taylor and Amanda Serrano.

I'd like to see John Docherty & Hopey Price on the undercard.

[QUOTE=BigZ44;20384048]Solid fight[/QUOTE] Neutral ground, that does wonders for legitimacy. I think this is a winner, as far as class goes.