Luke Campbell: I Want To Be The First To Beat Devin Haney!

Luke Campbell says he wants to be the first man to beat Devin Haney.

The 32-year-old British lightweight is well aware of the speculation surrounding a fight between himself and the 20-year-old American. And with their promoter Eddie Hearn keen to make the fight next year Campbell sounded keen to take on Haney when he recently spoke to Boxing Scene. 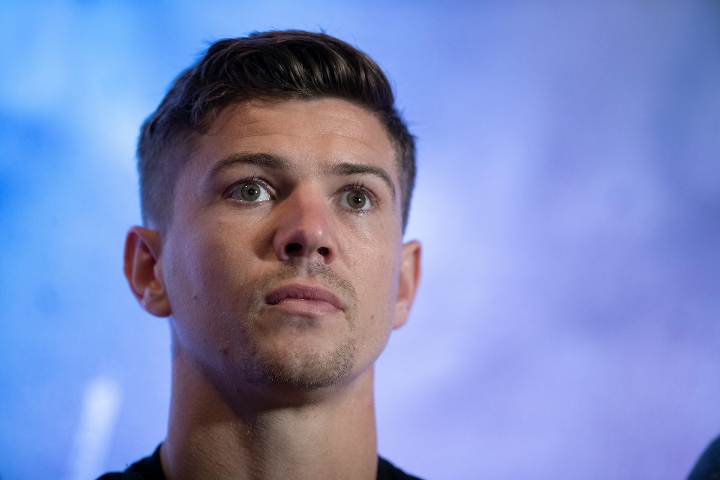 Nearly two months since losing to pound-for-pound king Vasiliy Lomachenko, Campbell is keen to move on from a performance that - while it saw him fall short over 12 rounds - was given praise after the test he provided for the WBC, WBA and WBO world champion at London’s O2 Arena in August. Campbell has been pleased with the feedback from those in his inner circle as well as fans and the boxing community in general but the two-time world title challenger is in a hurry to move on from it and prove that he can become a world champion at the third time of asking.

“Everybody has been coming up to me saying ‘Well done, you done amazing, you must be so proud’ and I don’t know what to say because they only usually say that to you when you’ve come up and won. So I’m thinking ‘I lost the fight!’

“Nothing is good enough for me if I lose a fight. [I] can’t be proud of myself if I didn’t win. So that’s what I’m thinking in the back of my mind but everybody, literally everybody, has given so much great feedback from the fight. All the fans, so many nice messages and [it’s been] quite overwhelming the amount of support I’ve had from the fight and everyone saying how great I did but for me I didn’t do great. I do feel there’s so much more I can improve on and will improve on and I believe that fight is the start of me getting better and better.

“I want to stay busy and stay active. I can’t wait to get back in the ring and improve on that performance. I’d love to get out again before the end of the year and by the beginning of next year I want to be positioned for a world title eliminator to get me back in to [fighting for] one of the belts and he’s (Lomachenko) someone I’d like to fight for one of them titles again”

Campbell admits he is his own worst critic and always has been. He never gives himself many compliments because he strives to be the best while looking to obtain perfection. Although he has been touched by the positivity since fighting Lomachenko, he says, despite others saying he shouldn’t be, that he is upset and disappointed with himself.

“I set myself goals and I want to win and I give it 100% to get there. I have goals that I want to achieve and if I don’t achieve my goals then I’m not happy with it.
“Next year is all about getting the [world] title. I could sit here now and say ‘Aw, I fought (Jorge) Linares for the title. I thought I just beat Linares. If the decision had gone to me no one would’ve said anything about it.’ I could have already been a world champion by now if life was fair but it’s just the cards I’ve been dealt, but it’s still not going to stop me from going on to achieve what I want to achieve.”

Despite personal criticisms Campbell believes that the gap between himself and Lomachenko isn’t as great as many first perceived. In fact the 2012 Olympic Gold Medallist believes he has given other fighters a lot of confidence and that a benchmark has been set for future opponents to go out there and match and even improve on.

“Let’s face it everyone absolutely bottled it against Lomachenko and he’s made great champions quit,” Campbell remarked. “There was certainly no quit in me and, because people have seen what I can do, I think it’s given them a little bit of confidence in going out there and doing something [against Lomachenko].

“I’ve watched it (the fight) once,” he added. “I’ve looked back at it once thinking there’s a few mistakes I was personally making from what I was doing. So I am looking back at that fight thinking I can be so much better than that. Which is, in a way, I guess, a positive that I can push him close, hurt the guy that’s ranked number one pound-for-pound. Don’t get me wrong, he had a couple of dominating rounds but I thought I had a couple of dominating rounds early on and I believe a lot of the rounds were fairly close apart from a couple. But other than that, when I was in the ring with him, I thought there was not a lot in it, not a lot of differences but I know I can be so much better than that and that really inspires me, makes me want to work more on my skills, get back in the gym and practice everything and come back with a bang and really take over this division.

“I’m just starting to get going now, come into my own, into my prime and be the best. These next few years is when you’re going to see the best of me. I’m a very late developer, I always have been, and you’ve not seen the best of me yet, not by a long shot.”

Leg Campbell get a win then make this. Haney can take out Selby, too.

[QUOTE=Sid-Knee;20152899]Read my post again. I don't blame Haney for anything. I was responding to another American idiot when he claimed Loma was ducking Haney like they always have to do. Loma isn't ducking anyone. He'll fight Haney when he's freed…

Make it happen Eddie. Let him fight a top 10 Lightweight for once

[QUOTE=Sid-Knee;20152897]It has been assured that Loma will never fight Haney due to this franchise shlt? Nothing has been assured. Loma hasn't ducked a single fighter in his life. This is just your poison and delusions like it always is. Loma…

[QUOTE=observer;20148041]Guess we watched a different fight... sometimes Loma would turn it on, and Campbell would get beat up... but Loma didn't maintain his attack consistently.[/QUOTE] But you have to work yourself into those moments. Had Loma just went for it…