Luis Ortiz: I Just Need a Name and Date - I'll Even Go Against Mike Tyson!

Since he couldn't go to the gym, Luis Ortiz built one in his house. He sought the help of a carpenter and made a ring, as well as assembling other necessities. Now he's only missing an opponent, but the Cuban heavyweight hasn't stopped training. Even before the coronavirus began he was working hard for a planned ring return.

Due to the care of his family and to comply with social isolation, Ortiz has not been in physical contact with the boxing stable of his coach Germán Caicedo - but that doesn't mean he has stopped following a preparation plan.

"I've stayed at home like everyone else,'" Ortiz said to George Ebro. "But I've remained active, with proper physical preparation. I already have my ring at home and there I do the exercises. I've been told I could fight again between August or September. In any case, I'll be ready.'' 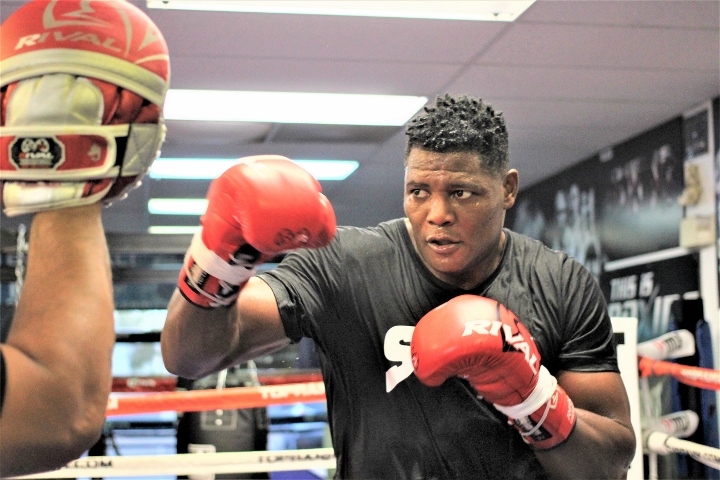 On several occasions, Ortiz recorded his routines and sent them to Caicedo, who remained locked in the gym for many weeks as the pandemic raged on the streets of Miami; other times Ortiz was with trainer Jukka Tiovola, who is in charge of supervising his physical work.

"With Luis we are in a job of maintaining his levels at a time when boxing activity is not strong,'" Tiovola explained. "It is a basis for when there is a firm opponent and he can enter into superior preparation without having to make many sacrifices.''

Since falling by knockout in November 2019 in a rematch with Deontay Wilder, Ortiz took off for just a couple of weeks before returning to the gym and was about to increase his work - when in March the order came down to stop everything and distance himself socially.

Whatever happens, Ortiz would like to fight at least twice in 2020.

"Me and you know I'm not a boxer sitting down to pick names for some convenience," Ortiz added. "I'm going against whoever it is and whoever I want. Now there's a lot of talk about Mike Tyson's return. If he wants to, I'll even go against him. I just need a name and a date.''

[QUOTE=Squ□redCircle34;20586912][B]Most on here are casuals and trolls who change up more than women do their clothes![/B] Wilder should be celebrated for taking on a tough ask in Fury who’s a horrible style match up for him! I still remember telling…

Who is Luis Ortiz's promoter? Who is he expecting to give him a name and a date?

[QUOTE=Ritz Kola;20583968]That's what hurt his career the most. Couldn't get cowards in the ring with him. I still remember the hype surrounding Wilder-Ortiz talks initially kicking off. I ALSO remember all the praise Ortiz was getting prior to that fight…

[QUOTE=DougalDylan;20584792]I'll correct that for you ... He's ducked Whyte twice and Joshua hard to see him fight anyone with a pulse well not for less than 7 million. Terrible pedigree, poor amateur record, and only the win against Jennings on…

[QUOTE=BreWall;20585749]Arreola is your best bet.[/QUOTE] Arreola I think is retired, but they will make him unretire and make Ortiz look good.