Fans who follow the lower weight classes are well aware of the roller coaster career of Mexico’s 24-year old former WBC and lineal bantamweight titlist Luis Nery (28-0, 22 KO). A fighter who caught eyes in the States on the BeIn Espanol boxing series, fans saw Nery evolve from prospect, to contender, to the man who unseated the long reigning, undefeated Shinsuke Yamanaka in 2017 by knockout.

It looked like the start of big things for the skilled young boxer/puncher.

One day, we might look back and see that it was. For now, his biggest triumph remains where his stumbling blocks emerged.

Nery tested positive for a PED but was allowed to keep the WBC belt when the sanctioning organization resolved he’d been exposed to contaminated meat. After one non-title fight, he took a rematch with Yamanaka and dramatically missed weight. He won again but at the cost of his title to the scale, a competitive suspension in Japan, and much skepticism from those who had followed his path up the ranks.

After serving a WBC suspension, Nery returned to action twice last fall, returning to the smaller shows he’d been a staple of before Yamanaka. This Saturday, he’ll have the biggest audience of his career in the US as a featured undercard bout on the Errol Spence-Mikey Garcia pay-per-view card (9 PM EST).

For those familiar with Nery, this is the next chapter in his story.

For a lot of Saturday’s viewing audience, it might well play like his first. Saturday marks an opportunity for Nery to introduce himself to thousands or more fans who have likely never seen him before against former Olympian and 115 lb. titlist McJoe Arroyo (18-2, 8 KO).

Whether one knows or doesn’t know Nery coming into this weekend, it represents a fresh start for a talent still well worth our attention. Regardless of opinions about previous failings, Nery is the goods in the ring. As a recent signee of the PBC, this could be a launching pad for more high profile dates and a chance to get back the belt he lost, presuming he can remain a bantamweight. 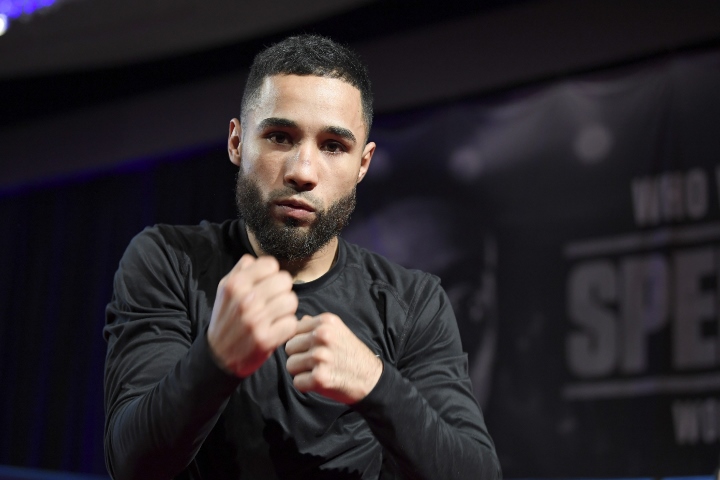 One the pay-per-view undercard of Manny Pacquiao-Adrien Broner in January, France’s Nordine Oubaali defeated Rau’shee Warren for the WBC belt Nery left vacant. Nery enters this weekend the number one contender to Ouballi (15-0, 11 KO) in the WBC ratings. Win and what’s next would seem obvious.

Arroyo, and then Oubaali, might only be the tip of the iceberg in terms of what is out there for Nery.

At Wednesday’s press conference for the big main event on Saturday night, welterweight titlist Errol Spence said he felt a win over lightweight titlist Mikey Garcia would crown him the sports pound-for-pound leader.

Win or lose, there would be ample debate on that point.

There is always debate on that point.

For hardcore fight fans, a piece of that debate could get intensify if and when the World Boxing Super Series at bantamweight concludes.

The winner of the tournament will have three of the four major titles at bantamweight. If Inoue, the strongly presumed favorite, stands tall and wins out impressively, there will be at least some who see him as right in the thick of any debate about the best fighter in the world sans weight classes.

Inoue already has his backers in that regard. A WBSS win would add to the ranks.

What Inoue wouldn’t have is all the belts in the class or a win over the man who was presumed the division’s new leader until his troubles began. If Nery can win this weekend, and goes on to face and defeat Oubaali, no one would truly be able to lay sole claim to the top of the bantamweight mountain without seeing him first.

If it were Donaire, Rodriguez, or Tete as the tournament winner, Nery would find an attractive rival. But if it’s Inoue, and the business side of things could be bridged, it could be something more.

Bantamweight doesn’t have a lot of superfights. If a year or less from now we’re staring at the possibility of a showdown between an undefeated Inoue and Nery, it might be the closest the division has come since the legendary battle of the Z Boys, Carlos Zarate-Alfonso Zamora, took place just over the division limit roughly four decades ago.

There are a lot of if’s and maybe’s before that’s something to think too much about…but it’s hard not to look ahead and wonder.

For now, Luis Nery has to take care of business this weekend as he begins the process of winning back the skeptics and winning over a whole new, whole lot bigger audience.

[QUOTE=Pantera_;19587412]Will you guys stop being so cynical and just enjoy the fights. I swear boxing fans are the worst. And then people wonder why boxing doesn't get the recognition it deserves :banghead: it's people like you.[/QUOTE] They are valid points…

[QUOTE=Koba-Grozny;19587484]I do enjoy it, man... I also rate Nery highly as a fighter, but you can't be complaining about other fighters from other countries popping dirty if you're willing to turn a blind eye to this glaring loophole.[/QUOTE] Alright whatever…

[QUOTE=Pantera_;19587412]Will you guys stop being so cynical and just enjoy the fights. I swear boxing fans are the worst. And then people wonder why boxing doesn't get the recognition it deserves :banghead: it's people like you.[/QUOTE] I do enjoy it,…

[QUOTE=Koba-Grozny;19582348]Yeah. I think everyone knows that already. So is the solution to just ignore it when Mexicans test positive for Clenbuterol or it's analogues (such as Zilpaterol)? Call me a cynic, but doesn't that kinda open a big can of…

[QUOTE=Pantera_;19582290]Please do your homework people. Believe it or not contaminated meat is a real thing in Mexico. Ranchers use it to bulk up their cattle. We can't expect all boxers from Mexico to become vegans either. That's almost unheard of…