A Look At Daniel Jacobs' Options Beyond Gabe Rosado Fight, End Of His DAZN Deal

Assuming Daniel Jacobs beats another huge underdog Friday night, the former IBF middleweight champion will move himself into yet another profitable position.

His lucrative contract with DAZN will conclude after he boxes Gabe Rosado, yet “The Miracle Man” still will have plenty of options once he and his team begin exploring his first fight of 2021. For a boxer without a title, the 33-year-old Jacobs will be a valuable veteran for multiple promoters, television networks and streaming services.

Jacobs could re-sign with Eddie Hearn’s Matchroom Boxing USA, the company that has promoted his past six fights. The Brooklyn native remains aligned with Al Haymon in an advisory capacity as well, which presents plenty of opportunities for him within the super middleweight division.

Jacobs (36-3, 30 KOs) discussed his plans for next year during a virtual conference call Tuesday while promoting his fight against Rosado (25-12-1, 14 KOs, 1 NC). DAZN will stream their 12-round super middleweight match as the main event of a five-fight card from Seminole Hard Rock Hotel & Casino in Hollywood, Florida (8 p.m. EST; 5 p.m. PST).

“Well, I mean, if I can choose, man, it’s just anybody with a belt,” Jacobs said. “I just wanna be a two-time world champion. You know, I have the team. Keith Connolly is my manager. You know, he’s the best manager in the game. I assure you that I’m gonna set myself up in a position to get an opportunity to fight for a belt. And the landscape of the super middleweight division is amazing. I think that the winner or loser of the Callum Smith fight [against Canelo Alvarez] is an opportunity.

“Billy Joe Saunders is an opportunity. I’ve been calling out Jermall Charlo for years now, so these are all fights that could be made. And I look forward for my team to make the right decisions for me. At the same time, we have options, and that’s the beautiful thing about the situation.” 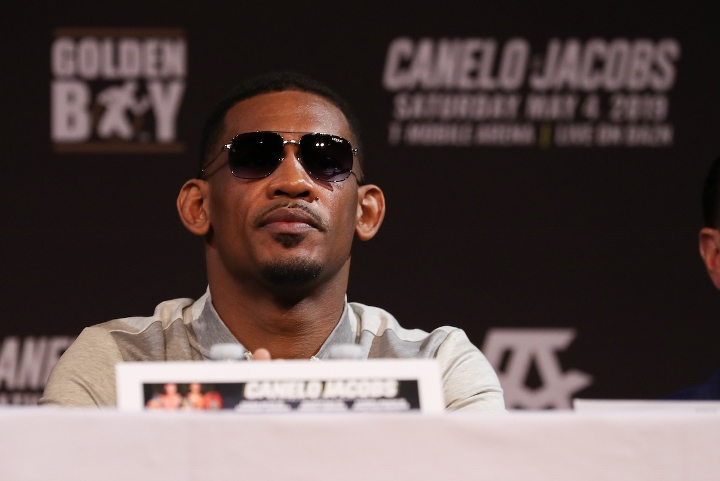 Below is an assessment of Jacobs’ three top options, in order of probability, if the cancer survivor were either to remain with Hearn and DAZN or if he were to re-join Haymon’s Premier Boxing Champions.

Billy Joe Saunders (29-0, 14 KOs): The British southpaw wants to re-engage Canelo Alvarez in negotiations for a fight in May if Saunders successfully defends his WBO super middleweight title against England’s Martin Murray (39-5-1, 17 KOs, 1 NC) on December 4 at Wembley Arena in London. Saunders lost out on by far the biggest payday of his career when his shot at Alvarez, tentatively scheduled for May 2 in Las Vegas, was scrapped due to the COVID-19 pandemic. Boxing Jacobs would satisfy Saunders’ search for a high-profile fight if he can’t land the obviously bigger, more profitable bout versus Alvarez (53-1-2, 36 KOs), assuming the Mexican superstar conquers Callum Smith on December 19. Jacobs wants an opportunity to become a two-division champion and is the third-ranked contender for Saunders’ championship, which makes this his most appealing, realistic option if remains tied to Hearn and DAZN.

Gennadiy Golovkin (40-1-1, 35 KOs): Hearn will attempt to make the fight DAZN still wants most – Alvarez-Golovkin III – if Kazakhstan’s Golovkin tops Poland’s Kamil Szeremeta (21-0, 5 KOs) on December 18 and Alvarez overcomes Smith the following night. Alvarez isn’t contractually committed to DAZN or Matchroom beyond boxing Smith on December 19, however, which could leave Golovkin looking for a marketable matchup for his first fight of 2021. Jacobs gave Golovkin the toughest fight of his career to the point that they fought in March 2017, when Golovkin narrowly won a unanimous decision at Madison Square Garden. A rematch with Jacobs, while not as appealing as a third fight against Alvarez, at least would provide Golovkin with a top opponent after a comparatively meaningless mandatory defense of his IBF middleweight title against Szeremeta. A Golovkin-Jacobs rematch would have to be contested at a catch weight or the super middleweight limit, though, since it is highly unlikely that Jacobs would compete at the middleweight limit again.

Demetrius Andrade (29-0, 18 KOs): This fight is a lot less likely for Jacobs than a shot at Saunders’ title or a rematch against Golovkin in part because Jacobs and Andrade are friendly. Andrade also would have to fight Jacobs at a catch weight or move up to 168 pounds for a non-title bout because Jacobs can’t make 160 pounds anymore. Hearn hopes to match Andrade against Saunders in 2021, but Jacobs would be the most accomplished opponent of the Providence-based southpaw’s pro career.

Jermall Charlo (31-0, 22 KOs): Jacobs has wanted to fight Houston’s Charlo for a few years and there is bad blood between them. This is the most prominent fight for Jacobs if he returns to PBC, but Charlo, like Golovkin or Andrade, probably would have to box Jacobs above the 160-pound limit at which he holds a world title (WBC). Charlo also wants to challenge Alvarez, though battling Jacobs would be a promotable bout for the unbeaten Charlo as well. They’ve both beaten Ukrainian contender Sergiy Derevyanchenko in middleweight title bouts, yet Charlo’s unanimous-decision defeat of Derevyanchenko on September 26 was more convincing than Jacobs’ split-decision win versus Derevyanchenko in October 2018.

Caleb Plant (20-0, 12 KOs): As is the case with Charlo and virtually every other middleweight or super middleweight, Plant’s preference is to face Alvarez in a pay-per-view event that would secure the biggest payday of his career. Nonetheless, the younger, unbeaten Plant, of Ashland City, Tennessee, would improve his resume by boxing Jacobs if a bigger bout versus Alvarez isn’t available to the IBF 168-pound champion. Jacobs is the IBF’s seventh-ranked contender for Plant’s title.

David Benavidez (23-0, 20 KOs): If Phoenix’s Benavidez can win back his WBC belt by defeating mandatory challenger Avni Yildirim, he, too, could offer Jacobs a chance to become a two-weight world champion. The unbeaten Benavidez understandably is targeting Alvarez or a much-discussed grudge match with Plant, which seemingly makes this fight less likely for Jacobs than a showdown with Charlo or a shot at Plant’s championship. First, of course, Benavidez is going to need to defeat Turkey’s Yildirim to regain a WBC 168-pound crown that has been taken from him twice without actually losing a fight in the ring.

[QUOTE=slimPickings;20913183]I dont care about the Rosada fight. Berlanga is RAW. He is being fed a string of bums to pad his record. When he steps up to some one with a pulse then maybe we can talk. If the fight…

[QUOTE=BlackR0bbb;20912768]Like I said, Berlanga would knock Jacobs out cold. ICE COLD. Did you see the fight tonight? After all that big talk about punishing Rosado...Gabe wasn't even bleeding or breathing heavily. I scored it a draw. Jacobs didn't do enough…

Only option for Jacobs for now would be a Rosado rematch and make a statement... Who will seriously give him a 7 figures fight after what we witnessed tonight ?

[QUOTE=slimPickings;20911586]I think so too .... in his dream. He'll have to apologize when he wakes up for daring to dream that. The kid is still RAW.[/QUOTE] Like I said, Berlanga would knock Jacobs out cold. ICE COLD. Did you see…

this is also true!