Though the current generation of boxing fans might not feel an instant connection, chances are good that anyone with a couple more decades under their belt already has an image in their head.

In layman’s terms, it was the title for a series of half-hour documentaries produced by HBO that dived deep into the run-up and aftermath of 12 high-profile fights the network aired between 1981 and 2002.

The first episode -- The Tale of Leonard-Hearns – aired on March 5, 2003 and was followed for the next 11 Wednesdays up to and including the May 21, 2003 premiere of The Tale of Lewis-Tyson.

A 13th episode – The Tale of Gatti-Ward – was added 10 years later but didn’t follow the same format.

Across the original dozen, long-time HBO blow-by-blow man Jim Lampley was in-studio to introduce each fight and provide relevant context before giving way to narrator Liev Schreiber interspersed with archival footage and relevant interviews conducted by HBO staff and freelancers.

The individual episodes were completed across 18 months, Lampley said, followed by a screening after which he wrote his scripts. All the intro and wrap-up segments were taped in a single session.

The fights that made the series did so after a prolonged, informal debate within the HBO Boxing team.

The then-president of HBO Sports, Ross Greenburg, made the final decisions.

“We got the first flight of shows done at manageable rights cost because no one was sure how the product would fare on the air,” Lampley said. “Networks do not retain rights to fights they televise – they revert to the promoters. Once these shows performed the way they did with audiences, further rights acquisitions would have incurred vastly inflated rights costs, so it became a one-off project.

“There were many more we could have done if not for that.”

Though only the Gatti-Ward episode followed the originals, Lampley said the style carried through to his subsequent series – The Fight Game with Jim Lampley – which included 32 episodes from 2012 to 2018.

“I have watched all Legendary Nights and they to some degree influenced the tone of The Fight Game,” he said. “Especially my leads and tags, which I composed.

“The whole series was a great collaboration among the producers, Merchant and me.”

And for a fight fan, it’s quite simple… they’re must-see TV.

With that mandate in mind – and to properly celebrate the 36th anniversary of the first live fight show I ever attended, Mancini-Bramble I at Memorial Auditorium in Buffalo on June 1, 1984 – I set out to watch the entire collection from end to end for the first time and rank them from 12 to 1.

My ultra-patient wife can attest to my having seen them individually a dozen times or more, but I’d never devoted six straight hours to wolfing down the whole collection in one bite.

And the fact that I did so while chatting with Lampley himself was, in a word, legendary.

So, without further ado, here goes… 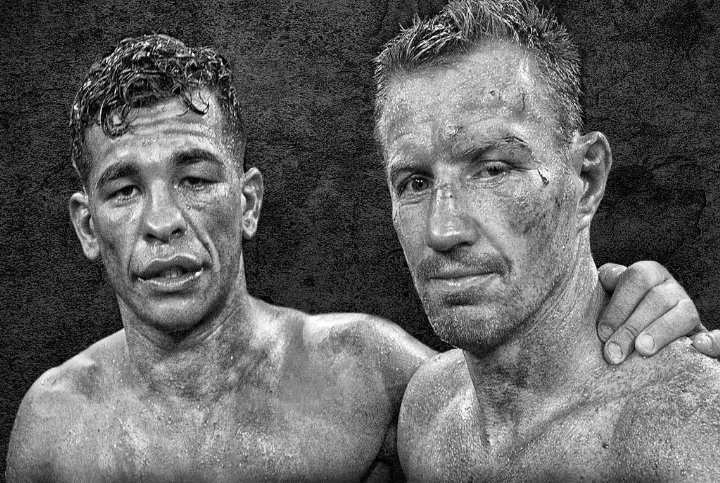 No. 12 – The Tale of De La Hoya-Trinidad
The Result: Trinidad SD 12 De La Hoya (Sept. 18, 1999)
The Highlights: De La Hoya’s walk back to the locker room. Bob Arum dissecting the scorecards of Glen Hamada, Bob Logist and Jerry Roth and lobbing allegations about a shady pre-fight meeting.
The Takeaway: A fine episode, but someone’s got to be last, right? Though the anecdote about a lowered towel at the weigh-in was amusing, the entire package fails to measure up to its brethren.

No. 11 – The Tale of Bowe-Golota
The Results: Bowe DQ 7 Golota (July 11, 1996); Bowe DQ 9 Golota (Dec. 14, 1996)
The Highlights: Lampley and George Foreman calling the chaos live from the first fight at MSG. Lampley’s quote: “Rock (Newman) is from the politics of engagement. Not the politics of contemplation.”
The Takeaway: Again, a perfectly solid episode that stands on its own but falls beneath others simply because the fights themselves, while noteworthy, were far less important.

No. 10 – The Tale of Lewis-Tyson
The Result: Lewis KO 8 Tyson (June 8, 2002)
The Highlights: A menacing Tyson instigating a pre-fight melee. Lampley’s classic: “Lennox Lewis knocks out Mike Tyson and banishes him from the upper stratosphere of the heavyweight division.”
The Takeaway: One of the most compelling run-ups to a heavyweight fight in the last 50 years, but the fight itself didn’t measure up to the hype – which took away from the show’s dramatic impact.

No. 9 – The Tale of Holyfield-Bowe
The Results: Bowe UD 12 Holyfield (Nov. 13, 1992); Holyfield MD 12 Bowe (Nov. 6, 1993); Bowe TKO 8 Holyfield (Nov. 4, 1995)
The Highlights: The contrasting back stories of the three fights. More Rock Newman. Holyfield’s recalling of the memorable 10th round of the first fight.
The Takeaway: The best heavyweight trilogy of the post-Ali-Frazier era is full of tidbits, particularly because each fight was so different and seemed to go so much against pre-fight assumptions.

No. 8 – The Tale of Hagler-Hearns
The Result: Hagler TKO 3 Hearns (April 15, 1985)
The Highlights: The storyline of how Ray Leonard’s retirement brought the two stars together. Steward’s revelation that a pre-fight massage in the locker room left Hearns’ legs in jeopardy from the start.
The Takeaway: Maybe the best eight minutes ever in a high-profile fight, so the footage alone sets it apart. Additional back story material enhances the piece and leaves it trailing only truly epic episodes.

No. 7 – The Tale of Hagler-Leonard
The Result: Leonard SD 12 Hagler (April 6, 1987)
The Highlights: Leonard’s brother, Roger, reacting to Ray’s comeback. Some may also not know it wasn’t an automatic that the fight would happen, as Hagler told Johnny Carson on the Tonight Show.
The Takeaway: It’s a fight whose fight generates dissension 33 years later, so looking back is interesting. Leonard encouraging Ollie Dunlap to yell “Thirty!” near the end of each round is a cool nugget, too.

No. 6 – The Tale of Holmes-Cooney
The Result: Holmes TKO 13 Cooney (June 11, 1982)
The Highlights: Remembering the craziness generated by Cooney’s managers – Mike Jones and Dennis Rappaport. Getting a close look at Holmes seething each time his challenger’s name was mentioned.
The Takeaway: Interesting to look back at the racial tensions that were enflamed and encouraged by the promoters nearly 38 years ago – particularly in the context of the issues across the U.S. this week.

No. 5 – The Tale of Foreman-Moorer
The Result: Foreman KO 10 Moorer (Nov. 5, 1994)
The Highlights: Moorer’s suggestion that had he ducked once more we’d all have bought a Michael Moorer Grill. Lampley’s “It happened, it happened” call still raises hair on the arms after 25-plus years.
The Takeaway: Hard not to like everything about this one. The story of Foreman’s return to the championship has become Exhibit A for those who believe Tyson is on the verge of a similar comeback.

No. 4 – The Tale of Pryor-Arguello
The Results: Pryor TKO 14 Arguello (Nov. 12, 1982); Pryor KO 10 Arguello (Sept. 9, 1983)
The Highlights: Lampley’s predecessor, Barry Tompkins, signaling the end with a memorable call: “Arguello slumps to the canvas!” Panama Lewis caught red-handed calling for “the one that I mixed.”
The Takeaway: For my money, the first one was history’s best fight when you combine both significance and action, so any lengthy recap is welcome. Seeing Pryor rebuffed by Leonard was interesting, too.

No. 3 – The Tale of Tyson-Douglas
The Result: Douglas KO 10 Tyson (Feb. 11, 1990)
The Highlights: How quiet was the Tokyo Dome? So quiet you “could hear a rat pissing on cotton,” according to Aaron Snowell. Also, the only show in the series where a future president makes a cameo.
The Takeaway: The piece does an excellent job telling Douglas’ tragic pre-fight story, adeptly describes the quiet venue and does well reviewing Don King’s aborted attempt to overturn the result.

No. 2 – The Tale of Chavez-Taylor
The Results: Chavez TKO 12 Taylor (March 17, 1990); Chavez TKO 8 Taylor (Sept. 17, 1994)
The Highlights: Seeing Taylor’s tragic decline after what would have been a career-defining moment. Hearing his corner’s flawed strategic instructions heading into the first fight’s fateful 12th round.
The Takeaway: It’s Lampley’s favorite of the series. “Everything you need to know about boxing is there in Chavez-Taylor,” he said. “It is heartbreaking.”

No. 1 – The Tale of Leonard-Hearns
The Results: Leonard TKO 14 Hearns (Sept. 16, 1981); Leonard D 12 Hearns (June 12, 1989)
The Highlights: The collision-course rise of the fighters. Angelo Dundee explaining why he delayed the fight. A much-younger Arum insisting no welter would beat Hearns. The classic ebbs and flows.
The Takeaway: Hearns is my all-time favorite and this is the fight that made me want to be a boxing writer, so it’ll always be a go-to watch. Dundee’s pre-13th round speech is the best corner moment ever.

F-HBO and F-that loser Peter Nelson who destroyed the boxing brand. Barstool is teaching that moron a lesson. HBO should fire that empty suit immediately!

[QUOTE=aaronbnb;20591008] 2) Barrera-Hamed - Ultimate story of hype train being derailed. Hamed deciding to retire afterwards is interesting. [/QUOTE] Never really saw Hamed as a hype train, he was seriously good, but had flaws, often being off balance and going…

1) Jones-Toney - Disappointing fight but backstory is great given Toney weight struggles and Jones overall dominance. Big personalities. That fight tells the stories of their careers. Also a story that hasn't been told. 2) Barrera-Hamed - Ultimate story of…