Lomachenko: Who Made Rules About Age In Boxing? I'm Just 32; I Feel Young

Teofimo Lopez likened his showdown with Vasiliy Lomachenko to a primal battle between a young lion and an old lion during a virtual press conference Monday.

A day later, the 32-year-old Lomachenko scoffed at the contention that he is anything resembling old.

“I don’t think about age because I’m just 32 years old,” Lomachenko said Tuesday as part of his own virtual press conference. “Who made the rules about age in boxing? It depends on the person’s lifestyle. Somebody [could be] old at 27 and at 30. Somebody [could be old at] 45, 47. I feel great and I feel young.” 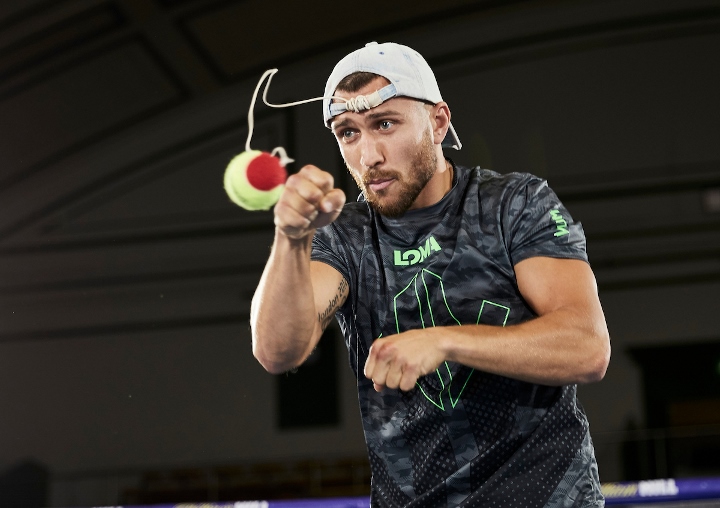 Ukraine’s Lomachenko has won world titles in three divisions during his seven-year career, but he has just 15 professional fights on his record. The 23-year-old Lopez points to his upcoming opponent’s extensive amateur background – nearly 400 fights and two Olympic trips – as evidence that the highly skilled southpaw isn’t as youthful as Lomachenko likes to think.

Nevertheless, Lomachenko’s manager, Egis Klimas, doesn’t think age will be a factor, either, when Lomachenko and Lopez square off October 17 at MGM Grand Conference Center in Las Vegas (ESPN).

Arum, whose company promotes Lomachenko and Lopez, is two months shy of his 89th birthday.

Their age gap notwithstanding, Lomachenko (14-1, 10 KOs) is consistently listed as a 3-1 favorite versus Lopez (15-0, 12 KOs). He has won 13 straight fights since Mexico’s Orlando Salido (44-14-4, 31 KOs, 1 NC) beat him by split decision in just the second professional fight of Lomachenko’s career 6½ years ago in San Antonio.

Lopez and Lomachenko will fight for Lomachenko’s WBA and WBO titles, as well as Lopez’s IBF belt. Lomachenko also is the WBC’s franchise lightweight champion.

“You’ve got the old lion versus the young lion,” Lopez said. “You know, and it’s amazing just to have this opportunity, and being able to fight for winner takes all. Just like in the poster – winner takes all, and that’s what it comes to come October 17th. One fighter. Two go in that ring, one comes out undisputed world champion.”

He aged like spilt milk. Weird considering his style was tailored to avoid "wars"

[QUOTE=Johnny2x2x;20823092]Loma took 148 power shots from a bigger stronger fighter. That ages a fighter quick.[/QUOTE] [COLOR="Navy"] He didn't take that much punishment and it was the 2nd "tough" fight of his career. Yes damage will age you eventually but he…

[QUOTE=observer;20823083]Touché... enjoy the prize. Don't make a habit out of betting though, or you won't have your winnings for long ;)[/QUOTE] True. Although I plan on betting twice bigger on Gervonta Davis vs Leo Santa Cruz for +10 out of…

Age in boxing isnt always defined by the actual age if a fighter but most of the time the mileage in their body. Amateur fights and training fir them count too. Eric morales was an “old” 30. Hopkins was a…