I’ve come to a decision.

Or, to be more accurate, I’ve confirmed a decision I’d already considered.

Vasyl Lomachenko is the best boxer in the world.

And to those contrarian masses on social media who’d suggest such a notion is either beholden to a promoter or network or simply not as enlightened as theirs, I have an equally simple response.

Though I am an ESPN subscriber and confess to not knowing proclivities of each and every sub-Saharan bantamweight, it’s not as if my opinions are entirely without merit.

After all, I’ve been an active fan of the sport since the ’70s, been paid to cover it since the ’90s and – thanks to the trinity of God, the Internet and Boxing Acquisition Inc. (in no particular order) – have parked my byline in this site’s space most Tuesdays since 2008.

As a result, I’ve interviewed all of today’s top stars, seen the vast majority of them from ringside at least a few times and enlisted a network of informed acquaintances to smack sense into me whenever my keyboard writes a check that my knowledge can’t cash.

With this one, though, there’s zero concern of an overdraft. 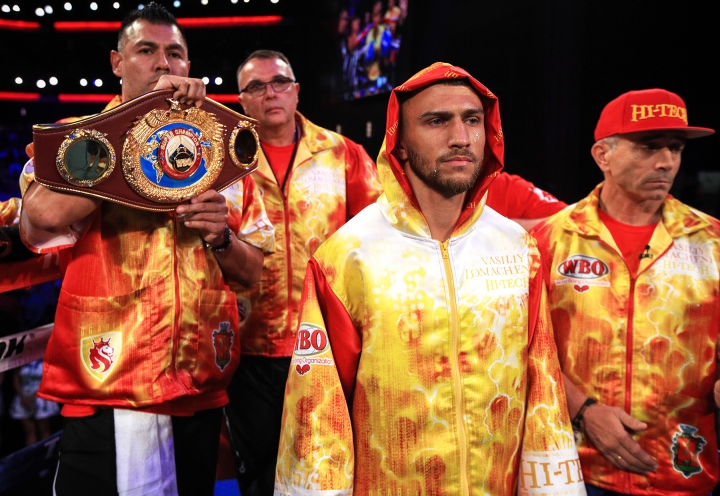 Over 36 or fewer minutes against Teofimo Lopez – who’s surely overmatched but has proven himself a world-class entity – Lomachenko will display the sort of comprehensive ring mastery practiced only by those worthy of the head of the P4P table.

He’ll control the tempo, geography and tenor of the fight, make it look effortless while doing so and incrementally ebb the wherewithal of a foe who’s earned title claimant status as much on tenacity as technique. As I watch it, in fact, I may actually begin to pity Lopez, who’ll look as helpless as a blind man flailing for cash in one of those promotional money chambers – but with the added ignominy of the printed presidents pummeling him as they float tantalizingly in and then just out of reach.

For let’s say 10 rounds of that trouble, Lopez figures to wind up a crimson-faced punching bag with an eye swollen to golf ball size and a headache that’ll take a truckload of Tylenol to ease. And if not for a benevolent trainer or referee stepping in, a loss from consciousness won’t be far off.

Meanwhile, for Lomachenko, suggesting the sky’s the limit even seems a shade confining.

He’s already ascended, in the space of just 15 pro fights, to top-spot legitimacy from 126 to 135 pounds, not to mention a No. 2 pedestal on Ring Magazine’s best-of-the-best list prior to the weekend.

And while the name above him on said roll call – Canelo Alvarez – is certainly worthy of such acclaim, the view from here is that he’s not so simultaneously superior to the rank and file as Lomachenko.

Alvarez has indeed earned 53 wins, 36 KOs and two draws in 56 fights, but he’s coming off a slugfest victory and three intermittently disputed decisions in his last five bouts – ignoring a joke fight for a joke belt against Rocky Fielding – and may have finally (after 15 years and multiple weight class moves) reached a level of competition at which his separation is not so vast.

He faces an intriguing path at 135 and toward 140, where talented suitors named Haney, Davis, Taylor, Prograis and perhaps even Pacquiao lay in wait to snuff momentum while employing their size and might to offset his footwork and acumen.

It won’t come easy, though, for any of them.

Alvarez could be deemed more “rugged” while Lomachenko leans nearer to “artistic,” but each carries such a variety of tools that neither adjective would be wholly inaccurate if labels were switched.

The tiebreaking contention here is the smaller man is simply a bit more other-worldly, and while Canelo seems sure to be a frequent contender for Fighter of the Year, the Ukrainian’s trajectory should follow an arc that leaves a trail still visible for generations.

So... I awaited few days before calling suicide squad so no one would spoil this clown's only proper choice in his life. I think he is rotten by now.

[QUOTE=Mr. 29K;20822357]Gracias, Mr. Lopez! You and Salido exposed another hype job. I guess it’s time to move on and find another great white hope.[/QUOTE] Lopez has a paler skin tone than Loma does

Gracias, Mr. Lopez! You and Salido exposed another hype job. I guess it’s time to move on and find another great white hope.

Someone check on this moron!!! Lmfao. I wonder if he committed suicide.

[QUOTE=glenn mcrory;20808603]This site had Lomachenko beating Salido in 3 and Russell dominating Lomachenko via wide UD, two of the easiest calls you could get in the sport. Take the worth of their opinion at your own peril.[/QUOTE] Learn your lesson…