The press conference dais told the story. Four title bouts were laid out, symbols of Vasiliy Lomachenko's current and long-standing status as one of boxing's elites. (photos by Mark Robinson)

Two days before a sold-out crowd of more than 18,000 packs The O2, this is what the fighters and their promoters had to say. 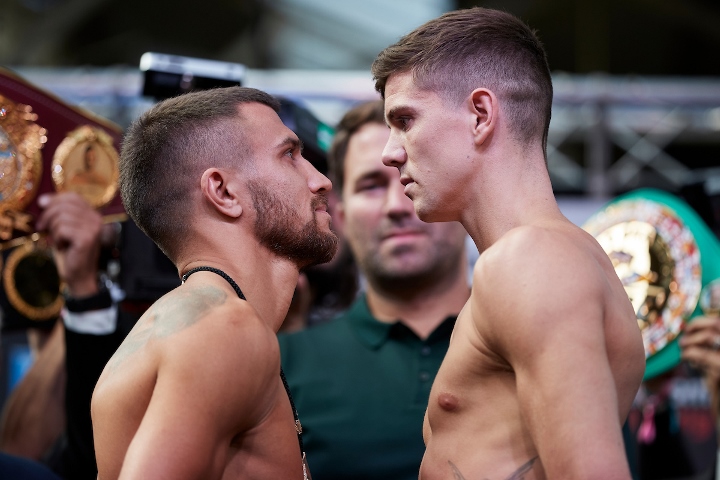 Bob Arum - "Now, {Lomachenko} comes over to the UK, which really is the country that is most passionate and knowledgable about the sport of boxing, to exhibit his talents before the UK audience. On behalf of Vasiliy Lomachenko and {Lomachenko's manager} Egis Klimas, we are grateful for the opportunity to be over here, to be fighting in this championship match, particularly against a world-class fighter like Luke Campbell."

[QUOTE=MexicanStyle#1;20027816]4 - 0 Campbell boxing beautifully.[/QUOTE] Lmfao, Campbell didn’t win four rounds all fight yet after four he’s was 4 up ?! Wtf do you guys go by to score a fight. Andre Ward and Bradley commentary team was superb…

Right after the fight, Luke Campbell was taken to hospital, the guy got BROKEN RIBS....in 5th round when he was badly hurted by loma shot to ribs

[QUOTE=Straightener;20027761]Stream that s**t I’ve got a hd stream for tonight total sportek Perfect picture[/QUOTE] Its the only thing to do mate, good stuff. Just cant believe the cheek of them trying to sell that.