Lomachenko Would Drop Down For Gervonta Davis, Jabs Lopez

WBA and WBO lightweight champion Vasyl Lomachenko tried a new way to communicate with his fans.

For the first time ever, the Ukrainian boxer had an Instragram live stream, in which he answered some questions about Gervonta Davis, his future fight and even discussed plans for retirement.

Lomachenko will return in Los Angeles on April 12 against mandatory challenger Anthony Crolla. The two-time Olympic gold medal winner is pretty depressed that he can’t fight with IBF champon Richard Commey, who suffered hand injury in his last fight.

"It’s better to fight with Commey than Crolla. Richard has belt at least and I have goal — to win all the belts," said Lomachenko in his live stream. 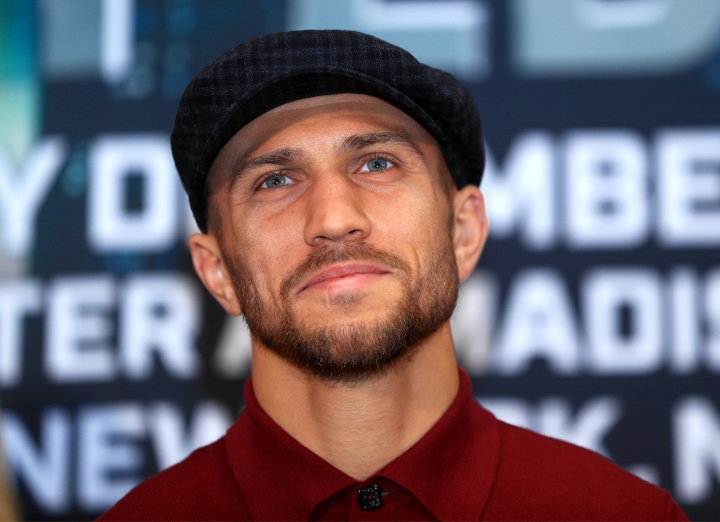 Lomachenko believes that in April he can show everything he has because in last two fights he was limited in action. Ukrainian fought with a shoulder injury against Jorge Linares and then he claims he was being cautious again Jose Pedraza.

"After my last two fights they said that Loma began to lose some position. But listen, guys, it was my third weight class. And by the way I didn’t use the right hook against Pedraza because of shoulder," Lomachenko said.

The main target for Lomachenko — is to become an undisputed world champion. When he takes all the belts, the Ukrainian will think about retirement.

"My goal is to collect all four belts in one weight class and retire. What should I do next? Boxing is sport for me. It’s interesting to challenge champions. Who should I fight with, when I become undisputed champion? I am ready to retire even at the age of 33 years. For the first time I wore gloves when I was 5 and after that my entire life has been boxing. But everything has an end," Lomachenko said.

However, Lomachenko declared that he has some opponents to fight with. He specified Gervonta Davis. Vasyl would even go to super featherweight just for a fight with Davis.

"Yeah, it would be very interesting to fight with Gervonta. I like to fight with everyone who talks a lot. Davis is at super featherweight but I can go for him, if only the promoters organize could this fight," Lomachenko said.

And what does Loma think about rising star Teofimo Lopez and all of his trash-talking? Vasyl compared Lopez to UFC superstar Conor McGregor.

"He is a young and ambitious guy. I think he does great job, people in the United States love these kinds of boxers. He tries to copy McGregor but Teofimo must keep in mind... everything that happened to Conor in the octagon. Especially when matched with top fighters — Conor lost," Lomachenko said.

[QUOTE=j.razor;19539762]bob doesn't want to mix up his fighters cuz his stable is not as stack as it used to be....LOL[/QUOTE]He has a nice stable, with Loma, Lopez and Pedraza all at 135. TR also co-promotes Miguel Berchelt! He could move…

[QUOTE=Long jabber;19539759]yea i dont know why people bring up **** about sparring maybe theyre those white dudes who box as a hobby but in most gyms if youre training to fight sparring matches are basically fights with each fighter trying…