With all of the boxers doing their part at the scales, all of the drama will be saved for the ring. 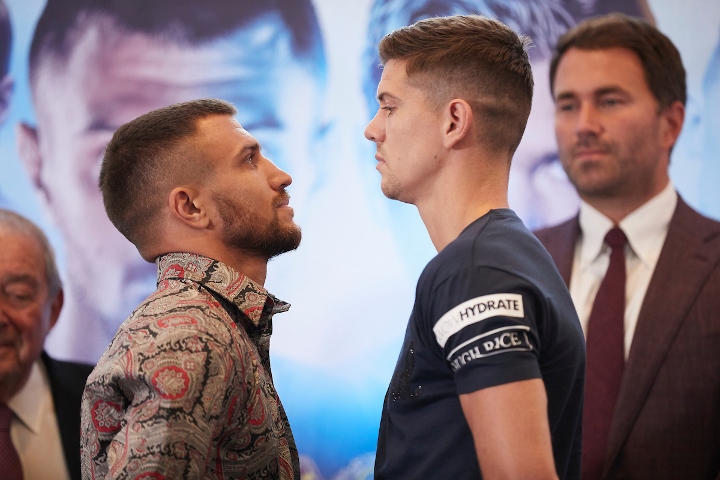 Lomachenko climbed off the canvas to knock out Linares last May to become a three-division titlist. The two-time Olympic Gold medalist and former featherweight and super featherweight titlist added a second 135-pound belt in a 12-round win over Puerto Rico’s Jose Pedraza last December in New York City.

Both boxers enter Saturday’s sold-out show coming off of knockout wins. Lomachenko stopped former ttltist Anthony Crolla in four rounds this past April, while Campbell halted Adrian Yung in five rounds in a stay busy bout this past March while waiting out his mandatory title fight.

The opportunity came about when Mikey Garcia opted to vacate his World Boxing Council (WBC) lightweight crown earlier this spring. The WBC approved a request by Lomachenko to fight for its vacant title despite already owning the WBA and WBO titles, and thus not being a ranked contender.

Nevertheless, it’s made for a major event in London as tickets to the loaded bill at O2 were sold out three weeks ago.

Loma gon mop the floor with dude....just gonna take some time tho.

[QUOTE=alexjust;20024415]I don't think Campbell will beat Loma, but I don't expect Loma to walk through him either. And give it a rest with euro level fighter nonsense. The guy is a legitimate champion, not ATG obviously and most likely not…

[QUOTE=SteveM;20024097]How is fighting a former gold medallist for a belt a pointless fight ya friggin numptie? A pointless fight was Garcia going up to fight Spence when he should have tried to unify at 135 or 140[/QUOTE] ————- You can’t…