Yoon, only 18 years old and born in Honolulu, HW, defeated veteran Victor Marquez in the fourth round, when the Mexican fighter decided to stay in his corner after 3 rounds of punishment this past Saturday in Mexico.

Logan Yoon was a highly decorated amateur fighter and now he is showing all of his talent as a professional boxer. It is the second time where Yoon traveled to Mexico and manages to knocked his opponent out. 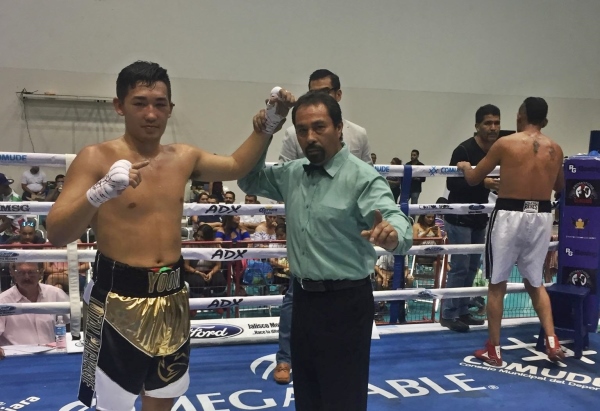 In September 2016, Logan Yoon made his debut in Jalisco, Mexico, defeating Leonardo Cervantes by first round knockout. Logan is trained by his father George Yoon since he was a child. In addition, they continue together in search of cementing their names as father and son future champions.

Logan's manager Henry Rivalta said - "I want to thank Richard and Hector Garcia for always making room for my prospects. They run a class act promotion full of local talent and it’s a boxing city. It was a good fight for Logan. We were supposed to fight at 140 and our opponent fell out the day before the fight. Vargas was a veteran last minute replacement. He weighed 154 and we knew Logan had too much skill for him so we agreed to the fight ate and drank something send weighed in at 147 and gave up 7 lbs."

" I was impressed how Logan handled himself even with a heavier guy. Logan started fast and at the end of the 1st round cut Vargas open with a right hook that split Vargas right eye. 2nd and 3rd round consisted of Logan imposing his will and dominating. Vargas had enough after receiving a brutal body attack in round 3 and refused to come out for the 4th round.

"I felt I could have gotten him out early, but we wanted to work on a few things" said Yoon.

"I love Mexico their fans are incredible and they are wonderful people. I took hundreds of pictures with total strangers... men women and children... they made me feel right at home.  I want to thank my manager Henry Rivalta, my promoter Kris Lawrence, my father and most important God. Without him, none of this would be possible."

"Logan is scheduled to return to the ring on June 3 in Santo Domingo. He takes his commitments very seriously and that is another one of his secrets. Humility, discipline, determination and skills best describes Logan Yoon. He’s a young quiet bad ass," said Rivalta