Youtube star Logan Paul has announced that he plans to move forward with an official appeal of the recent decision loss to his social media rival KSI.

Last weekend, KSI defeated Paul by way of a six round split decision at the Staples Center in Los Angeles. Both of them turned pro for the contest.

In 2018, in the UK, they fought to a draw - but they competed under amateur boxing rules. 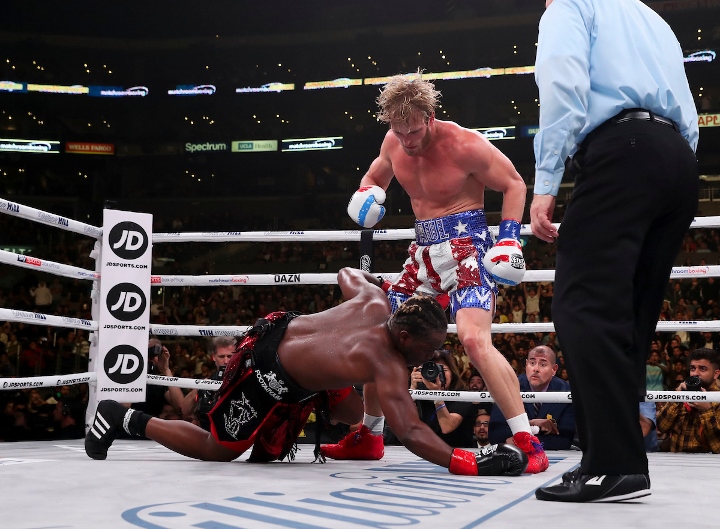 Paul is angered by what happened during the fourth round.

There was a controversial moment when Paul scored a knockdown of KSI. He rocked KSI with an uppercut, but then held his head in place for a second uppercut as KSI was dropping down. While he was down, KSI landed another punch.

Referee Jack Reiss took away two points, one point for hitting and holding and another for striking KSI while he was down.

Paul believes Reiss went too far, claiming that he landed a "love tap" while KSI was down and that the punishment "simply did not fit the crime".

"We just don't believe the outcome was right," Logan Paul said on his YouTube channel. "By no means am I afraid of losing, but I truthfully 100 percent believe I did not lose the fight.

"This is a plea to the California State Athletic Commission, and I hope they give this the weight it deserves because I fear that since we aren't real professional fighters that this may be overlooked."

Paul also double-downed on his promise to fight again. The rematch was carried by streaming service DAZN, who have interest in showcasing more boxing matches between popular Youtube stars.

"Regardless of the decision I'll be back in the ring boxing," Paul said.

I don't like Logan Paul, but what if he exposes something about the corrupt business of boxing with his anger? I'd support it. Maybe he'll stop real boxers from getting screwed over

And the point of the appeal is what? He could lose another 5 close/dubious decisions on the bounce and still others with millions of social media followers will call him out for a multi-million £$ clash. He's never going to…

[QUOTE=drjerryfowler;20194811]1) When you punched KSI and he was down. It was like you were trying to get KSI away from you (he was clearly hanging onto your leg & you had to drag him to walk). You just tapped him…

[QUOTE=Willy Wanker;20194715]Imagine if pro boxers just appealed losses instead of trying to get rematches.[/QUOTE] One doesn't exclude the other. It would be a much more fair sport when you don't have to take thousands of punches to get to the…