The Logan Paul-KSI weigh-in Friday was tame compared to their press conferences and other interactions leading up to their cruiserweight rematch Saturday night at Staples Center in Los Angeles.

They talked trash after making weight on a makeshift stage outside Staples Center, but the YouTube rivals weren’t as outlandish as they’ve typically been while promoting their second fight. Paul and KSI, whose real name is Olajide Olatunji, will make their pro debuts in this bout.

The 24-year-old Paul, of Westlake, Ohio, officially weighed 199¼ pounds, just below the cruiserweight limit of 200. The 26-year-old KSI, of Watford, England, stepped on the California State Athletic Commission’s scale considerably lighter, at 193¼ pounds. 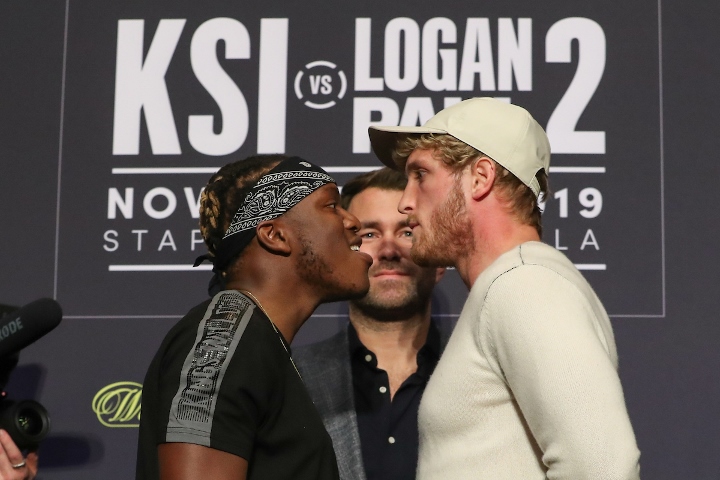 The CSAC has sanctioned their six-round rematch as an official professional boxing match. Their first fight, a six-round amateur match, resulted in a majority draw 14 months ago at Manchester Arena in Manchester, England.

DAZN will stream the Paul-KSI rematch as the main event of a show scheduled to start at 7 p.m. EST/4 p.m. PST in the United States. It’ll headline a Sky Sports Box Office pay-per-view event in the United Kingdom (£9.95; midnight GMT).

Below are the official weights for the Paul-KSI undercard:

I’m excited for it. I hope KSI wins.

Must be soul destroying for a pro boxer who has dedicated his life to the sport to be undercard support to 2 youtubers. Sad day for boxing

FFS - The WBA has introduced a 'gold' title now? I thought mineral titles were the WBC's realm.