Logan Paul: 'I'm So F---ing' In To Fight Antonio Brown on DAZN

YouTuber-turned-boxer Logan Paul and NFL All-Pro wide receiver Antonio Brown are embroiled in a Twitter feud that could potentially lead to a boxing match staged on DAZN.

The two unpredictable showmen fired shots at each other Monday when Brown tweeted “Square up Logan Paul,” garnering nearly 11,000 retweets. 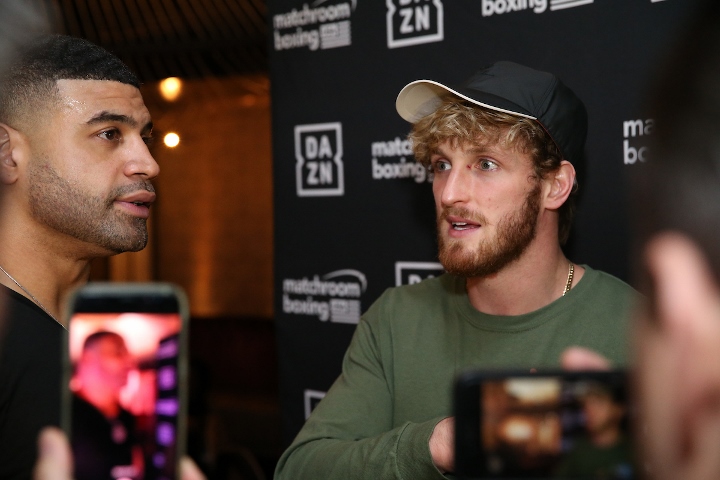 Paul is coming off a decision loss to KSI in his pro debut as the main event at Staples Center in November. He took the stage Wednesday during his brother Jake Paul’s press conference announcing his Jan. 30 boxing match against fellow content creator AnEsonGib to clear the air on fighting the perennial Pro Bowl wideout Brown.

“Antonio Brown is in a position where he can definitely use this fight,” Paul told a handful of huddled reporters. “A.B. and I are having some minor head butts. It could turn into something very real, but right now I think we can put on the best f------ show of 2020. I have no doubt in my mind it would be the biggest event of 2020 — bigger than Wilder-Fury 2 and the return of Conor McGregor. I may be delusional and optimistic, but the crossover between the massive digital audience and the mainstream audience A.B. brings would be f------ insane.

“It would be very good for him. Is that fear of losing going to haunt him not to take the fight? He’s one of the best f------ athletes in the world. His ability to pick up a new sport like boxing, I’d imagine it would be pretty quick. For sure he would be ready to go with three months of training.”

Paul expressed that DAZN, the carrier of his last fight, and Matchroom Boxing, the promoter, have expressed serious interest in him fighting Brown.

"I text with [DAZN’s North America VP] Joe Markowski every day. He last texted me, 'I’m so pumped about this A.B. fight, bro. It will be seriously big.' ... [Matchroom CEO] Eddie Hearn and Joe are pumped."

Paul’s fight against KSI was DAZN’s fifth most-watched event in 2019, only behind the boxing matches of Anthony Joshua besting Andy Ruiz in the December rematch and Canelo Alvarez’s crushing KO win over Sergey Kovalev in November.

“I took an ‘L’” on the chin [in the KSI fight] and now am moving on to the next to make it a bigger and better event,” Paul continued. “I’m so f------ in. From a sheer entertainment standpoint, I don’t think there is anything more exciting than that. It’s on A.B. Does he really want the smoke? Or did he get his clout check mark for January [by calling me out].”

Brown has had one of the most unpredictable 10 months of any athlete in recent memory. The longtime Pittsburgh Steelers player was traded to the Oakland Raiders in March. After suffering a frostbitten foot due to excessive cytotherapy, clashing with the NFL to use his old helmet and then battling with coach John Gruden and the front office, he was cut by the team in September. Days later, the Patriots signed Brown, and after suiting up for one game, he was cut by the defending Super Bowl champions shortly after being accused of sexual assault and rape in a federal lawsuit. Since September, Brown has displayed a series of erratic behavior on social media too long to list here, and calling out Paul could be another chapter.

Paul, however, is taking Brown’s challenge to a fight very seriously. His goal and lifelong dream is to stage an event at Madison Square Garden, and he feels a fight with Brown would perfectly fit the bill.

“If there is an appetite for me fighting, I’m definitely one to give the people what they want in a major f------ way,” he said. “If it’s not A.B., it’s going to be another major name that’s going to shatter the internet. I love to put on show on massive levels.”

Paul weighed 199.4 pounds in his decision loss to KSI. Brown is listed at 185 pounds in his bio on the NFL’s website. If a fight were to ever take place, agreeing to a catchweight would be feasible.

“I’m a showman. I’m a s--- talker,” Paul added. “The more you can make a character of yourself … but the people love to see it. You know how I like to play mind games. I would f--- with him diligently. I truly believe I would drop him faster than the Patriots. I’m talking round one or round two.”

Manouk Akopyan is a sports journalist and member of the Boxing Writers Assn. of America since 2011. He has written for the likes of the LA Times, Guardian, USA Today, Philadelphia Inquirer, Men’s Health and NFL.com and currently does TV commentary for combat sports programming that airs on Fox Sports and hosts his own radio show in Los Angeles. He can be reached on Twitter, Instagram, LinkedIn and YouTube at @ManoukAkopyan or via email at [email protected]

WTF is this real...? Antonio will smash this kid.

Conor McGregor about to have a better record hahaha

[QUOTE=el***;20312692]He did 2 fights already and now his dumb brother is fighting and not even on his undercard but on his own headliner fight. This is stupid, these people have zero skills. If it was for free or for charity…