Golovkin’s promoter told BoxingScene.com that there’s a “structure in place” for an agreement. If the deal is consummated, Mexico’s Alvarez and Kazakhstan’s Golovkin are expected to fight again in an HBO Pay-Per-View main event September 15 at T-Mobile Arena in Las Vegas.

“I’ve been in regular contact with Eric,” Loeffler said, referring to Golden Boy Promotions president Eric Gomez. “Both promoters, we’re ready to go to start promoting this fight. We’re just waiting on the fighters’ side, just to finalize any of the outstanding details there would be. … There is, for sure, a structure in place for it to take place – basically for it to be rescheduled from the May fight to the September date.” 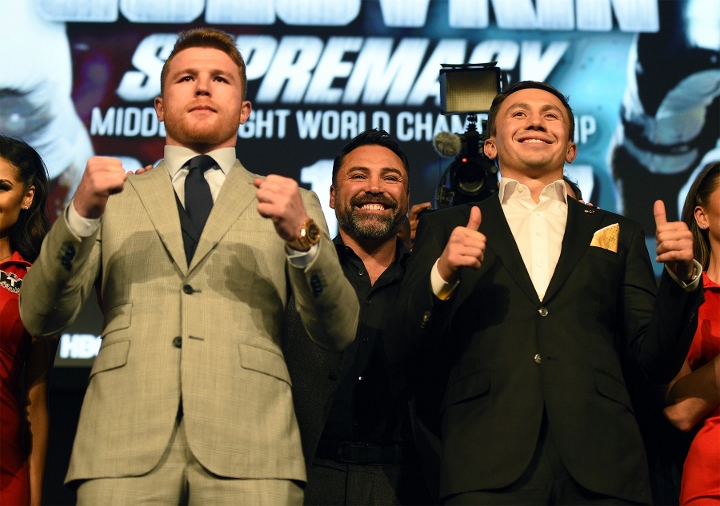 Loeffler discussed negotiations for the Golovkin-Alvarez rematch during a break from the IBF’s hearing on the status of Golovkin’s mandatory title defense against Sergiy Derevyanchenko (https://www.boxingscene.com/golovkin-derevyanchenko-ibf-ruling-expected-soon--128409). Whatever the IBF rules regarding Golovkin and Derevyanchenko (12-0, 10 KOs), Golovkin almost certainly will face Alvarez again in his next fight.

The 36-year-old Golovkin (38-0-1, 34 KOs) and his handlers considered it a positive step last week when Alvarez agreed to take part in the Voluntary Anti-Doping Association’s testing program 365 days per year (https://www.boxingscene.com/canelo-alvarez-announces-vada-test-him-peds-year-round--128187). Alvarez remains suspended by the Nevada State Athletic Commission, but his suspension should end after August 17 because his six-month ban is retroactive to the date of his first failed test for clenbuterol (February 17).

Assuming his suspension ends then, the 27-year-old Alvarez (49-1-2, 34 KOs) would be eligible to fight Golovkin again September 15. They battled to a controversial draw last September 16 at T-Mobile Arena.

Loeffler and Gomez made it clear that their shared priority was to reschedule the Golovkin-Alvarez rematch once Golovkin knocked out Alvarez’s late replacement, Vanes Martirosyan, on May 5 at StubHub Center in Carson, California. Negotiations have advanced accordingly over the past two weeks.

“It wouldn’t be a long, drawn-out negotiation like it was before [for May 5],” Loeffler said. “It’s the biggest fight for both guys and it seems natural that both guys would want the fight. At the same time, you know, that’s why we’re here [at the hearing]. Gennady has certain obligations as a unified champion, and so that’s what we’re trying to do – if we can do the Canelo fight, appease the fans and what’s best for the sport, as far as doing the biggest fight in the sport of boxing. At the same time, we’re trying to abide by the rules of the sanctioning bodies that he has titles of, and those things don’t always connect.”

[QUOTE=icha;18812316]Tom Loeffler spoke optimistically Tuesday about the likelihood of finalizing a deal soon for a Gennady Golovkin-Canelo Alvarez rematch. “Both promoters, we’re ready to go to start promoting this fight. [B]We’re just waiting on the fighters’ side[/B], just to finalize…

Eric Gomez "We sent them an contract in April, they came back with changes, we accepted those changes"... Tom Loeffler “Both promoters, we’re ready to go to start promoting this fight. We’re just waiting on the fighters’ side, just to…

I hope the fight happens in September ...

This is the fight at 160 to be made, let's have it! Boxing fans around the world want it I can't wait for September, both fighters are clean let's go!

[QUOTE=Shadoww702;18798129]Anyone that says GGG won easy doesnt know sht about boxing and isnt even worth wasting your time on. Just report them as SPAM and move on. No one has time for dumb fuks like that.[/QUOTE] En serio homie! Just…