But it wasn't to be and now the return of the future Hall-of-Famer is uncertain.

"His manager, Carlos Blandon, sent us an email on Tuesday to myself and Mr.(Akihiro) Honda that because of the political unrest they weren't able to complete the Visa and his passport," explained Tom Loeffler, the head of GGG Promotions, to BoxingScene.com. "The U.S. consulate is having issues down there. That was a last minute occurrence down there." 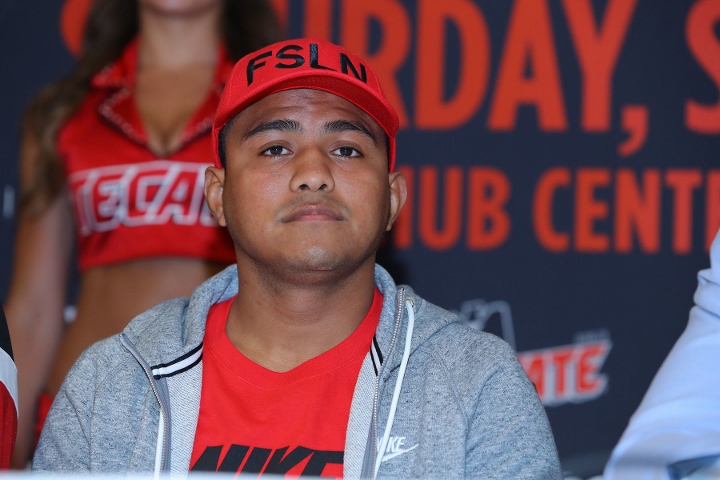 Gonzalez (46-2, 38 KO's) has not returned to the ring since getting stopped in four rounds by Srisaket Sor Rungvisai in their rematch for the WBC super flyweight world title back in September. Prior to that, he lost a twelve round decision to the Thai boxer.

Gonzalez had conducted interviews a week ago with the local press in Nicaragua and explained that he was hesitating to fight on the Golovkin vs. Martirosyan card on late notice. He mentioned the possibility of fighting at home in the coming months.

With his absence it was announced that unified women's welterweight champion, Cecilia Braekhus, will be facing Kali Reis as the first ever female bout to be broadcast on HBO.

As for when the 30-year old Gonzalez will return, Loeffler says - "I'm not sure, that will be between his manager and Mr. Honda. But he said something about wanting to fight in June maybe in Nicaragua but we'll see. If the 'Canelo' (Saul Alvarez) fight happens with 'Triple G' it would be great to have him on that show in September."

LOL with the sales this fraud of a card will make they couldn't afford to divide the $10 this was going to make. GGG needs his $8 dollars and the rest can divide up the 2 bucks and hopefully buy…

[QUOTE=megas30;18728979]They started co-headlining his fights with GGG, to help GGG gain recognition, because Gonzales had many fans and was considered pound for pound. Now that GGG's name is built up and Roman had a terrible lost, they don't really need…

[QUOTE=Finito2K;18727107]Used him how? His last 6 fights have been televised with him headlining 2 HBO cards. Unheard of for a super flyweight.[/QUOTE] They started co-headlining his fights with GGG, to help GGG gain recognition, because Gonzales had many fans and…

[QUOTE=megas30;18723367]It is simple. They used him to build up GGG cards and now GGG has a pretty good name, there is no need for Roman anymore, unless of course he comes very cheap.[/QUOTE] Used him how? His last 6 fights…

[QUOTE=Real Talk85;18722922]They did this bull**** to sell tickets. Chocolito has been a major buffer for GGG fights. He brings in big Latin crowds and they out him on all there west and south west cards as the co main event.…