TOM LOEFFLER said he was “surprised” to hear of HBO’s decision to withdraw from boxing.

Loeffler, who has promoted Gennady Golovkin and the super-flyweight series on the network, hopes to have a new home for his middleweight and little stars by the end of the year.

Many saw HBO seem to wind down before coming to a halt and making their major announcement, but Loeffler was particularly taken aback by the haste of both the decision and the end game.

“There were rumours about it and with the transition with the merger with AT&T, they weren’t sure how that was going to affect it, so it wasn’t a complete surprise,” he continued. “But once we got the news it was something we didn’t expect, that they would be so sudden. Triple G is going to take off some time. He’s in Kazakhstan with his family and he will probably come back some time in the spring next year.” 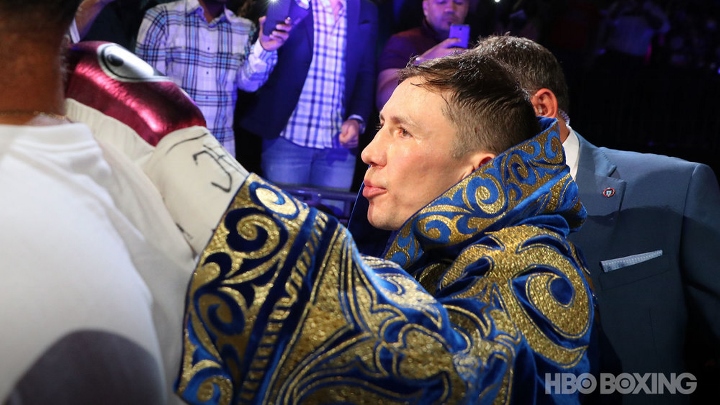 Golovkin is a free agent and is likely to spark a bidding war between DAZN, ESPN and Showtime.

“Yes,” Loeffler added. “Everyone has contacted me already about Triple G and about a lot of the other fighters that we work with in our super-fly series and we will see what’s the best platform. I would imagine [a decision will be made] some time this year, just so we have it set for what’s going to happen next year.”

Even though Golovkin felt hard done by in the scorecards in both Alvarez fights, that remains the biggest commercial match out there for him, making a trilogy.

“I think that’s the fight that makes the most sense for both Triple G and Canelo depending on when that fight will happen,” Tom went on. “But I will have to sit down with Gennady and see what he wants to do, we still have to sit down with Golden Boy and see what their plans are with Canelo and make sure there’s nothing in place that would be a conflict of allowing that third fight to happen.”

Would they go back to Vegas?

“That’s a good question,” he said, pausing for a moment. “For some reason in both the first fight and the second fight, it seems like a lot of close rounds went to the challenger. The majority of the media saw it the other way, the fans saw it the other way, especially internationally we’re seeing that Triple G won the fight. I don’t know if it was just the Canelo effect in Vegas or what it is but they fought in Vegas twice. I think the T Mobile is a great arena, the MGM was a great host but we will see how the third fight evolves. But if there’s a different location for the third fight, it could make sense for the fans.”

Loeffler remains dignified while discussing the scorecards, even if he does not see what the judges saw, with GGG earning just one out of six scorecards over the two fights.

“That was a phenomenon for two fights that we thought he won both and clearly won the first fight, second fight won by one or two rounds, at worst a draw,” Loeffler said.

“He feels in his heart that he won twice against Canelo. The only disappointment is not in his performance but the scores. We’ve had two fights with Canelo.

“They’ve been big, commercial successes – the biggest paydays for both, Triple G and Canelo – and at the same time there are some other great names in the middleweight division and even [at] super-middleweight. So we will see what he wants to do, what Canelo wants to do and we will move forward from there.”

Golovkin is 36. He turns 37 next April, but Loeffler said they are not looking at an end game.

“There’s never been any set timeframe,” he said of what might be left of Golovkin’s career.

“Gennady’s the type of boxer who’s not going to stay in boxing longer than he wants to if he’s not enjoying it but if the [Canelo] fights would have been judged the way we saw it in the ring there’s no discussion about his age because he would have had two wins over Canelo. But unfortunately because the scores didn’t necessarily reflect what happened in the ring as far as the general perception, then it’s a different topic of conversation. But as long as Gennady’s having fun and as long as he feels that there’s challenges out there for him it seems his popularity is higher than ever. The fans feel that he won the fight and the fans feel that he should still be the champion and we took him around and saw one of his sponsors in Beverly Hills and he couldn’t even walk on the sidewalk because he was surrounded by the fans asking for autographs and photographs, so we really see his popularity even more now after the second fight than beforehand.”

[QUOTE=aboutfkntime;19162552]he could have selected Saunders, Derevyanchenko, or Jacobs..... but he selected Vanes, and got stripped for his trouble look, fair point about the money-fight with Canelo..... but your problem is, Golovkin has refused to lift a finger to make a…

[QUOTE=Truth Serum;19163222]Agreed! Not sure why GGG picked Canelo but he beat him twice anyways! Time for GGG to take on some meaningful fights and stop wasting the little bit of time he has left! GGG to end the Charlo hype…

[QUOTE=aboutfkntime;19162552]he could have selected Saunders, Derevyanchenko, or Jacobs..... but he selected Vanes, and got stripped for his trouble look, fair point about the money-fight with Canelo..... but your problem is, Golovkin has refused to lift a finger to make a…

[QUOTE=j.razor;19159052]That fight is wack. We want [B]Jermall vs golovkin![/B][/QUOTE] Agreed! We've already seen GGG beat Canelo twice! Time to move on and take a paycut and whoop Charlo next! I wonder who Canelo fans want him to fight next? You…

[QUOTE=AKAcronym;19162565]"He could have selected Jacobs, but he selected Vanes." Yeah totally, despite Jacobs fighting literally the week before. Makes complete sense. And Jacobs wanted more money when they first started negotiating, making it get pushed back, even though it was…