Less than three weeks after we mourned the stoppage of boxing events nearly universally, live boxing returns on April 5 in Japan.

The legendary Japanese Rookie Of The Year tournament will begin this week with the East Japan bracket, and will be streamed live and free via YouTube. The event is being branded “Save Japan Boxing,” days after many of Japan’s top boxing gyms were ordered to shut down due to COVID-19 concerns. Fans will be given the ability to donate, and those who do can receive a t-shirt signed by Japanese world champions such as Naoya Inoue and Ryota Murata.

Each year, the tournament consists of four round bouts between fighters who can have no more than four professional bouts, and no more than 40 amateur bouts, meaning the entrants are considered to be “C-class” prospects looking for a big break. Ultimately, the winner of the East Japan bracket and the West Japan bracket face off in the All Japan finals in December. In the past, the tournament has produced champions such as Fighting Harada, Jiro Watanabe, and Katsunari Takayama (who is making his in-ring return this May).

In general, the sporting scene in Japan is returning to normal. It has been announced that the rest of the boxing schedule in the country will resume in early May, while other combat sports are already back in action. Mixed martial arts, kickboxing, and professional wrestling have all resumed. Nippon Professional Baseball has been holding exhibition games in advance of its regular season, however, three Hanshin Tigers players tested positive for coronavirus last week, which may alter those plans.

Japan has avoided a massive COVID-19 outbreak, but some experts fear that one is forthcoming, especially with mass gatherings continuing. The Rookie of the Year events this week will take place without spectators, however, the May events in Japan will allow fans, albeit with certain restrictions. There will be no ticket sales the day of the event to avoid unnecessary interaction at the box office, fans will reportedly have their temperature taken on the way into the venue, and it is expected that fans will be seated in every two seats to maintain some distance. Standing room only tickets will not be made available to further limit congestion.

Of course, all of these plans are fragile, and could easily be cancelled if an outbreak that these very events could contribute to does indeed happen.

If everything does go to plan however, it wouldn’t be shocking to see promoters from elsewhere in the world trying to find ways to either get their fighters to Japan to fight, and television networks finding a way to air Japanese shows. Networks are starved for content right now, and with things as unconventional as eRacing doing monstrous numbers on FS1 last week, are likely to take a chance on events they otherwise wouldn’t look at. 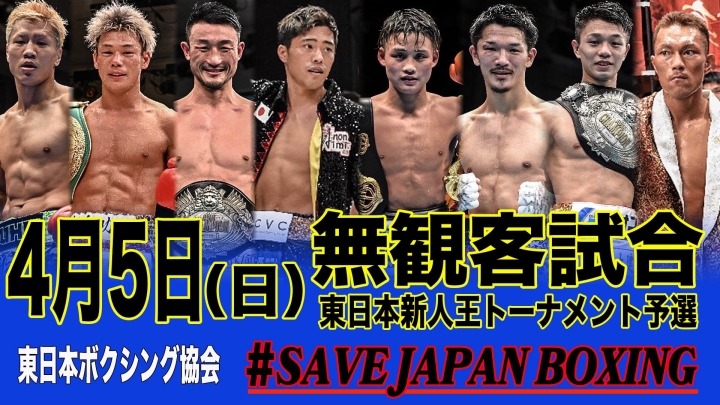 Outside of Japan however, boxing companies are simply leveraging what they have in droves: Archival content. One advantage boxing has over other sports is its replay value. Boxing matches are easier to watch without context than a random old game, and they’re also much shorter. From a television logistics perspective, even a 12-round fight can easily fit into a one hour block with some light editing. Replaying, say, an entire baseball game, is a little trickier to schedule. There’s also close to 80 years of televised boxing to dip into, plus older footage, most of which is owned by ESPN.

Showtime put its best archival foot forward over the weekend, re-airing the first three Rafael Marquez-Israel Vazquez bouts, arguably the best trio of bouts any two fighters have ever had. FS1 re-aired Fury-Wilder II, and has been running various marathons of PBC fights from through the years. Without New York Mets games to air, SNY has been re-airing plenty of Broadway Boxing classics as well.

Companies have also started to put old bouts on YouTube, including some serious classics. Queensberry Promotions recently opened its vault, which previously aired continuously on BoxNation, and has been placing some tremendous content online. Frank Warren and Co. have uploaded handful of Prince Naseem Hamed bouts, including his war with Kevin Kelley, as well as classics from Nigel Benn, Chris Eubank and more. DAZN has been doing the same, dipping into the archives of Golden Boy and Matchroom, offering up a number of Oscar De La Hoya, Anthony Joshua and Canelo Alvarez fights, which are now available on the company’s YouTube and digital platform.

With networks in dire need of content, now could be a time for promoters to build relationships with networks, and networks to collaborate with other channels. Digitally, those who own the rights to bouts should continue doing what they’re doing and make it as easy as possible to find and watch old boxing matches right now. People are spending more time in front of screens than ever before in history, and maybe ever again, including the older generation of fans boxing has so desperately tried to get back to watching regularly. This time is, if nothing else, a tremendous opportunity to lure them back with free nostalgic content.

As for those of us who have never stopped watching, the mere existence of live fights will make this week feel like the closest thing to “normal” that we’ve had since this all began.

Enjoy it while it lasts.

[QUOTE=1hourRun;20487938]I hope I'm wrong, that really bummed me. As the article states, it would also give other boxers/promoters hope and the means to stage their fights over in Japan. :grr:[/QUOTE] Fkn gutted... I got all excited just for about 2…