For his own personal reasons, Sergey Lipinets would love to see Mikey Garcia secure his first welterweight win on Saturday.

That doesn’t mean he’s picking the former four-division titlist outright in his bid versus Jessie Vargas.

“I think it’s a 50/50 fight,” Lipinets (16-1, 12KOs) told BoxingScene.com ahead of Saturday’s main event, which airs live on DAZN from the Ford Center at The Star in Frisco, Texas. “Mikey is a good boxer but his lack of quality fights in the welterweight division could give Jessie a little edge.” 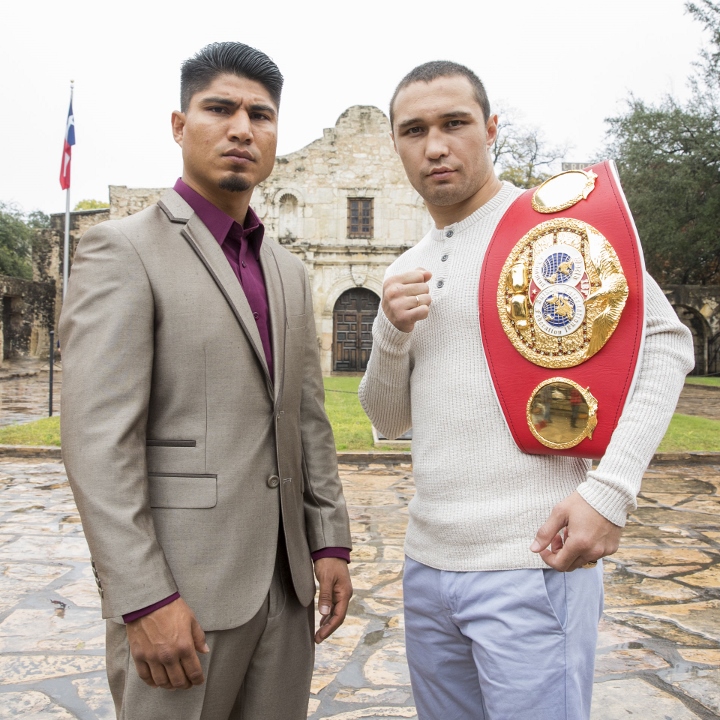 The bout comes of interest to Lipinets, whose lone career defeat came at the hands of Garcia in their March 2018 junior welterweight title fight. Garcia claimed a hard-fought 12-round decision to collect his fourth divisional title, while rendering Lipinets’ 140-pound reign as one-and-done.

Three wins have since followed for the knockout artist from Kazakhstan, including a thrilling 10th round stoppage of former two-division titlist Lamont Peterson last March in his opponent’s home region in the greater Washington D.C. area. The feat came eight days after Garcia (39-1, 30KOs) suffered his lone career defeat, a 12-round shutout loss to Errol Spence in their battle of unbeaten pound-for-pound entrants last March in Arlington, Texas, barely 30 minutes from Spence’s DeSoto hometown.

Saturday will mark Garcia’s first time back in the ring since then, and his second attempt in securing a victory at welterweight. No title is at stake for the bout, while Lipinets—who scored a 2nd round stoppage of Philippines’ Jayar Inson in his most recent bout last July—will have the opportunity to land an interim welterweight title in his upcoming showdown versus Uzbekistan’s Kudratillo Abdukakhorov. Their bout will likely take place on May 16, either in Las Vegas or the greater Los Angeles area.

A win on Saturday will put Garcia in prime position to challenge the welterweight elite—if any are available to face him. In the event that such a fight doesn’t materialize, Lipinets would love nothing more than to give him a crack at the title he plans to collect this spring.

That’s if Garcia wins this weekend.

“The Errol Spence fight didn’t give Mikey a full feeling of the welterweight division, so we still don’t know what he can and can’t do,” notes Lipinets. “Given the fact that these two guys know each other so [well], it might turn into a chess match.

“If Mikey wins and comes knocking for a title fight, I will be more than happy to offer him one. This time around I believe it will a little different.”

Lipinets needs to move on. If Garcia looks good, Lips will get beat again. If Garcia wins ugly, nobody will care. I think Vargas is too big for both of them, but not his head, Lips head is more stationary…

Worry about getting the IBF interim belt

That the only we I think garcia can beat. He is mediocre. Garcia can't knock nobody at 147. He is a midget at ww. So how can he be the favorite one?. This smells fishy. Don't know why Garcia is…

What title does sergey have?