ATLANTA – Lionell Thompson made the most of what only could’ve been viewed as his last chance to prove himself Saturday night.

The career-long light heavyweight knocked down Jose Uzcategui in the first round of Thompson’s super-middleweight debut and out-boxed the former 168-pound champion to win a unanimous decision. All three judges – Max DeLuca (95-94), Harold Hunt (96-92) and Nola Oliver (96-92) – scored their 12-round fight for Thompson in the first of three bouts Showtime televised from State Farm Arena.

Uzcategui (29-4, 24 KOs) was a 10-1 favorite to beat the 34-year-old Thompson, who’s promoted by Floyd Mayweather’s company. But it was Thompson (22-5, 12 KOs) who recorded the most noteworthy win of his 10-year pro career on the Gervonta Davis-Yuriorkis Gamboa undercard. 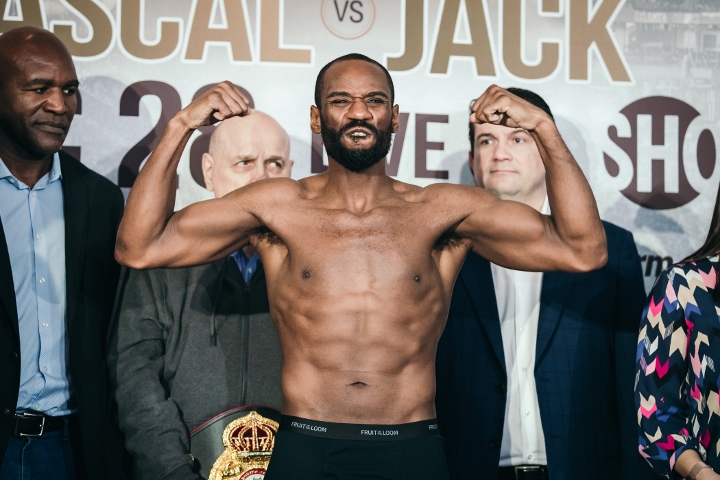 Thompson, a Las Vegas resident raised in Buffalo, New York, fought at the super middleweight limit of 168 pounds for the first time since he turned pro in February 2009. Each of his previous 26 professional fights were contested either at light heavyweight or cruiserweight.

“Moving down to 168 [pounds], I was a little worried for my first fight, but I felt great,” Thompson said. “I still had the power at this weight, and I hurt him a few times. This is my weight class now, and I think I have a real chance at becoming super middleweight champion and putting my city on the map as the first world champion from Buffalo.”

Uzcategui, 29, lost for the second time in his past three fights.

Caleb Plant won the IBF super middleweight title from Uzcategui by winning a 12-round unanimous decision January 13 at Microsoft Theater in Los Angeles. The native Venezuelan knocked out a lesser opponent than Thompson, Roberto Valdez (10-10-1, 7 KOs), in the first round of his first fight following his loss to Plant on September 21 in Tijuana, Mexico, where Uzcategui now resides.

“I thought the decision was fair,” Uzcategui said. “I don’t want to make any excuses. He came to fight.”

Uzcategui added, though, that having only one round of action on his record since Plant beat him hurt his cause Saturday night.

“The distance from my last fight definitely showed,” Uzcategui said. “I was very rusty. I need to get back in the gym, train harder and hopefully get another fight in the next few months.”

Uzcategui fought out of a southpaw stance in the 10th round. Thompson out-landed Uzcategui in that round, however, as Uzcategui mostly missed while ineffectively pressuring him.

Thompson jabbed Uzcategui to the body and landed a couple right hands as he stuck and moved during the ninth round. Uzcategui pressured throughout the eighth round, but he couldn’t land anything that hurt Thompson.

Thompson’s right uppercut turned Uzcategui’s head sideways in the seventh round, but Uzcategui didn’t appear to be hurt.

Thompson began squinting late in the seventh round. By then, Thompson had a cut over his right eye and some swelling above his left eye.

Thompson drilled Uzcategui with a straight right near the end of the sixth round.

A left hook and overhand right by Uzcategui made Thompson retreat late in the fifth round. Thompson shook his head to show Uzcategui that he wasn’t hurt, despite eating those punches.

Referee George Chip deducted a point from Thompson for holding early in the fourth round. He had told Thompson in the third round that he had issued his last warning for holding.

A hard jab by Uzcategui snapped back Thompson’s head just after the halfway point of the first round. Uzcategui was in control of the opening round before Thompson tattooed him with a perfect, straight right hand that sent Uzcategui to the seat of his trunks with under 10 seconds remaining in it.

A smiling Uzcategui easily beat the count and the bell sounded soon thereafter.

[QUOTE=champion4ever;20289164]Now you can see how Caleb Plant was able to whoop his ass. His career is done, finished and through. David Benavidez would stomp kick the living s[COLOR="Black"]hi[/COLOR]t out of Caleb Plant if they ever fought.[/QUOTE] True. I bought into…

[QUOTE=PBR Streetgang;20287574]Uzcategui just can't pull the trigger if his feet aren't set.[/QUOTE]Now you can see how Caleb Plant was able to whoop his ass. His career is done, finished and through. David Benavidez would stomp kick the living s[COLOR="Black"]hi[/COLOR]t out…

I saw this s[COLOR="Black"]hi[/COLOR]t coming a mile away when Caleb Plant kept dropping him on his ass. Jose Uzcategui is now a shot wash out fighter who needs to retire before he gets hurt. His career is now unofficially over…

Kudos to the referee cause he finally deducted a point for holding to the black guy. Too bad he kept running and holding so it was a snooze fest. Uzcategui has no heart, letting his Latino fans down, needs to…