The upcoming fight between Pablo Cesar Cano and Venezuela's Jorge Linares, which is scheduled for the 18th in the Hulu Theater of Madison Square Garden in New York, has been sanctioned as an official WBC world title eliminator at junior welterweight.

The winner will be in line for a title crack at current World Boxing Council champion Jose Ramirez, and that is enough motivation for both boxers to go all-out in what is expected to be an action fight.

"The motivation is not lacking in this fight, just the fact of facing Linares had already excited us, the fact of it being an eliminator has excited us much more. We have worked very well and when you work very hard things go well. Fighting with Linares is a good opportunity for me, I'm focused on giving the fight of my life," said Cano to ESPN Deportes. 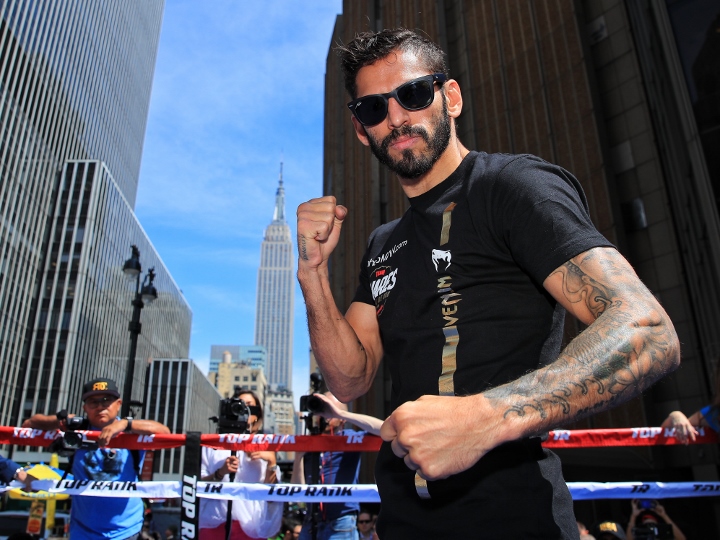 The winner of the battle in New York, which will be distributed through DAZN, must then wait for the winner of the clash between José Ramírez and José Zepeda - which takes place on February 10.

Earlier this week, Linares (45-4, 28 KOs) told ESPN's Zone that he was smarter, faster and more experienced than Cano, but none of that will make him overconfident.

Cano is not paying any attention to his statements. He plans to come in with a lot of motivation to take the fight to Linares.

"He can thinks what he wants, I have to go out and do my job, I've said that I'm going for all or nothing in this fight and that's the kind of fighter he's going to face," said the 29-year-old Mexican. boxer with a record of of 31-7-1 and 21 knockouts.

The main event of the card will feature Demetrius Andrade making a defense of his World Boxing Organization middleweight title against Artur Akavov.

Linares - Cano is a showcase to get to Ramirez. In the end, styles make fights and Ramirez doesn't have the style. Lastly, I expect Linares to call out Lomackenko at 140 were he can up his size advantage.

[QUOTE=ceylon mooney;19428138]Linares - Ramírez? I can dig that. great scrap. In house bob musta paid prograis a FORTUNE to go into the WBSS.[/QUOTE] True, Linares and Ramirez is a scrap but Bob paying off Prograis...bizarre comment. It's become as fashionable…

Linares - Ramírez? I can dig that. great scrap. In house bob musta paid prograis a FORTUNE to go into the WBSS.

Can’t wait for Ramirez vs linares!

This is ridiculous!!!! How does a .500 fighter since 2012 get an eliminator???!! Cano has done nothing to warrant being in an eliminator!