Liam Walsh will go up against Paul Hyland Jnr for the vacant British lightweight title on an MTK Fight Night event taking place on Friday 19 February.

The event will be broadcast live in the US on ESPN+ in association with Top Rank, and worldwide on IFL TV, and sees Walsh and Hyland Jnr square off after MTK Global recently won the purse bid for the must-see fight.

Former world title challenger Walsh (23-1, 15 KOs) is back after a pair of impressive wins in 2019, as he looks to become a two-weight British champion after previously holding the belt at super-featherweight. 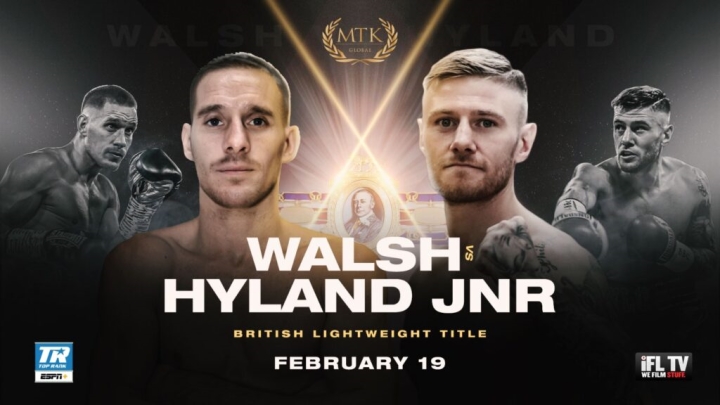 Belfast fighter Hyland Jnr (20-2, 7 KOs) is just as keen to add a championship to his collection, having challenged for the European and British titles over the past 18 months.

Walsh said: “I’m grateful to be fighting so early in the new year especially with the current conditions. Big shout out to MTK Global for continuing to put shows on in these hard times.

“I was pencilled in to fight in March this year but the show eventually got pulled due to the coronavirus. It’s been frustrating not fighting but on the positive side I’ve managed to train throughout and spend time with my family, and now I’m ready for this fight.

“I know a lot about Paul Hyland Jnr. He is someone I’ve always kept an eye on as I thought our paths might cross one day. I’m expecting a very hard fight.”

Hyland Jnr said: “I’m very excited to have a date and a shot at the British title again. I’ve got this chance to be back in the ring against Liam Walsh, so I can’t wait.

“Walsh is a world level fighter and is a former British and Commonwealth champion, so he’s very good, but I’m confident for this fight.”

Promoter Lee Eaton added: “We’re thrilled to announce the date for this tremendous fight between Liam Walsh and Paul Hyland Jnr for the British lightweight title.

“Liam has been desperate for a big fight for a while, so it’s great to get him in the ring with Paul Hyland Jnr, who will provide a serious test for him.

“It’s our second massive event announced for 2021, following on from the great show taking place in January that features Karim Guerfi vs. Lee McGregor for the European title, and Sean McComb vs. Gavin Gwynne for the Commonwealth title, so we can’t wait to kick off the year in style.”