Lewis Ritson's Manager: No Rush, We're Looking At The Long-Term

Lewis Ritson’s manager Phil Jeffries is urging everyone to just slow down a little bit after the Geordie’s latest victory.

Ritson (20-1, KOs), promoted by Eddie Hearn, has reached the lofty heights of number two with the WBA after his all-British super lightweight world title eliminator win (UD 12) against Robbie Davies Jr last month in front of another passionate indoor home crowd of several thousand in Newcastle.

Ritson’s stock has risen again after suffering his first professional loss at lightweight last year. After demolishing the British domestic scene in 2017/18 he then fought Francesco Patera for the vacant European 135lbs title but fell short losing on a split decision in front of his loyal fans. 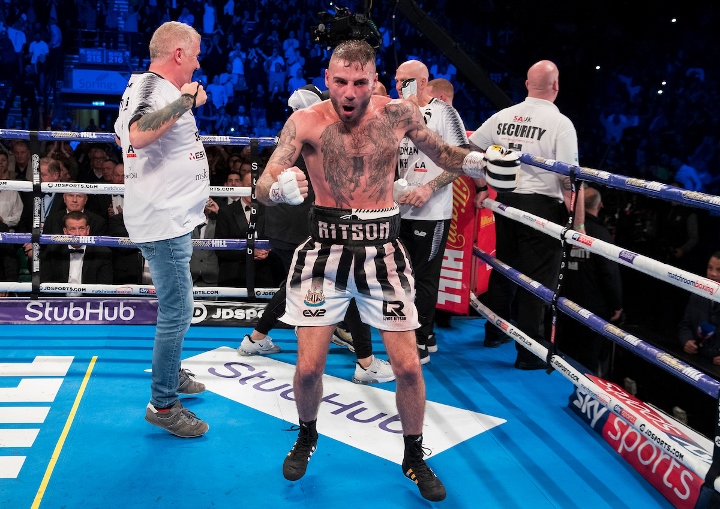 Rejuvenated at 140lbs, Ritson now finds himself heavily linked with a fight against WBA and IBF champion Josh Taylor and the Scot’s last opponent Regis Prograis. The American’s promoter Lou DiBella took to Twitter a few days ago and said “How about Regis Prograis vs Lewis Ritson in St James Park [home of Newcastle United FC]? Winner gets Josh Taylor?”

“I never seen the tweet,” said Jeffries to Boxing Scene who went on to give his response to DiBella’s idea.

“My response to that is it’s got to be right on the financial side for Lewis, but Lewis is only 26. Personally I’d like him to work with Neil Fannan, his coach, a little bit longer. You’ve seen the difference since the European title fight against Patera. We’re open to offers. We never say no to anything, really, but at the end of the day Lewis is only 26 and still learning.”

‘Scene then asked Jeffries if he thought there were too many people out there who are in a rush with Ritson’s career.

“Yes, personally there’s too much of a rush because I’d like to see Lewis progress over the next two years. At the end of the day, two and a half years ago, he was doing ticket sales on my shows and then all of a sudden he wiped them all out at lightweight at British level and then maybe I shouldn’t have taken that European title fight, I maybe just jumped on the bandwagon.”

Ritson’s last fight against Davies Jr. was a bona fide fight of the year contender with each man setting a whirlwind of a pace in the opening few rounds and concluding matters with a thrilling and crunching final three minutes. Both men deserved a long break and while Ritson has the money to take himself and his young family abroad the working-class hero took his family to the popular British resort of Butlin’s.

“The Newcastle people are chuffed with him,” said Jeffries. “And he’s that laid back, he’s such a nice lad, you’ll see him walking down the high street with everyone else. He’s had three days in Butlins with the kids. Even though he can afford to go abroad he went to Butlins with his family.”

But the message from Jeffries remains that everyone needs to slow down a bit. That being said, if an offer came in that was too good to turn down they would take it but it’s clear Ritson’s manager would like to see a bit more progression from his man.

“These days I think there’s a lot of pressure on fighters... to push them too quick,” he said. “At the end of the day nobody gives a shit about the fighters, it’s all about the ratings and the money. I’m old school, I think they should build up a fighter gradually. We’re looking at the long-term, we want to be in this for the next few years and enjoy the ride.”