Fighting a lot like his Mexican countryman Manuel Medina, Miguel Vazquez appeared to turn back the clock and score enough points to upset Lewis Ritson, but Ritson's constant forward movement and snappier punches allowed him to escape with a highly controversial split decision despite being out-landed in all categories (193-141 overall, 80-75 jabs, 113-66 power).

Vazquez earned those raw numerical gaps by being much more active (83.4 punches per round to Ritson's 45.3) and producing the much busier and slightly more successful jab (49.4 attempts/6.7 connects per round to Ritson's 25.9 attempts/6.2 connects per round) but Ritson was more accurate in all categories (26%-19% overall, 24%-13% jabs, 28.3%-27.7% power) and his connects were strong and easy to see -- factors that probably helped his cause beyond geography.

The CompuBox round-by-round breakdown of total connects -- relevant because clean punching is a key judging factor and because fights are scored round-by-round instead of in totality -- saw Vazquez prevail 9-3 but it appeared that two of the judges -- one of which was photographed looking at his cell phone during the action and the one who judged Ritson to be a winner by the widest margin -- placed heavier but less frequent connects over ring generalship and work rate. Scoring: 117-111, 115-113 Ritson, 116-113 Vazquez. 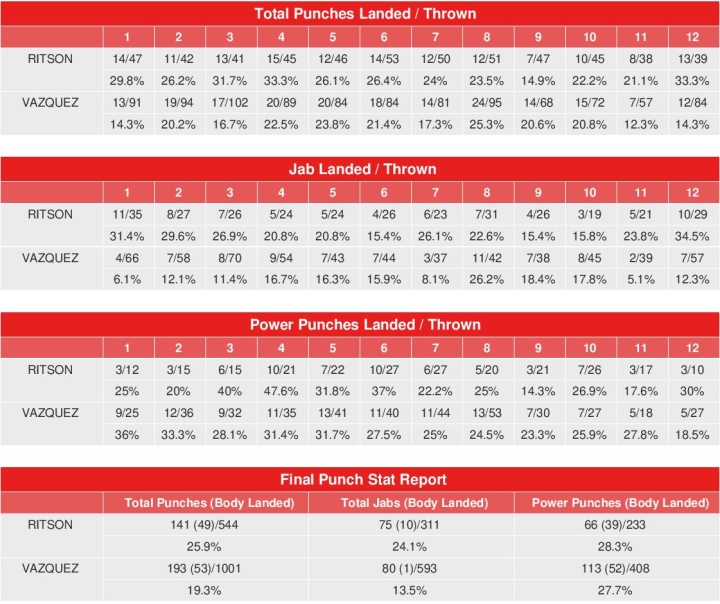 They even had compubox on the fix! Who are they trying to fool. I lost count how many jabs were stuck in Ritson's face. It was the most lopsided show of skill I've seen this year and the fellas with…