Lennox Lewis changed trainers after Oliver McCall knocked him out in September 1994.

“I say you can’t go to university with your third-grade teacher,” Lewis said Monday, according to London’s Daily Mail. “They won’t have the answers you need at that level. You need a professor by then.” 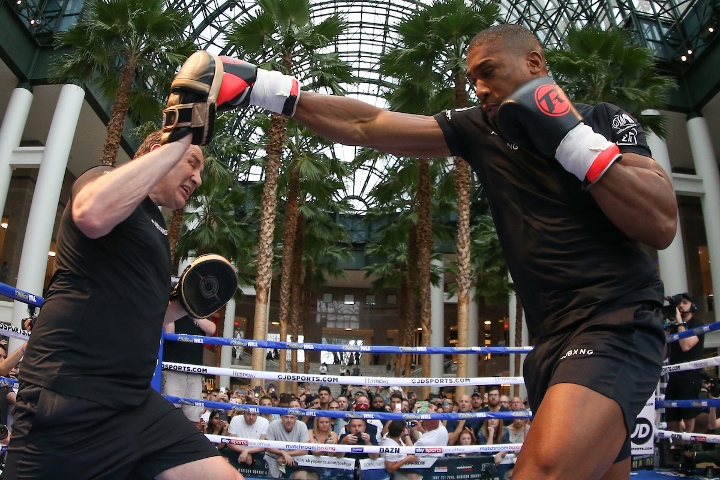 McCracken has trained Joshua since Joshua was an amateur boxer and has drawn praise for his work with the 6-feet-6, 245-pound former champion.

“McCracken is A1, without question,” Lewis said, “but maybe not the fit for the style AJ needs to fight. I switched to Manny Steward, who understood how to leverage all of my physical attributes and skills, and showed me everything I needed to know for success.

“[McCracken] may not be right for the type of style that AJ needs to master. Aside from that, AJ was not prepared for anything Ruiz brought to the table.”

Joshua, 29, tried to brawl with Ruiz after Ruiz knocked him down for the first time in the third round and didn’t respond well to an opponent that pressured him. Trying to slug it out with Ruiz (33-1, 22 KOs) led to Ruiz sending Joshua (22-1, 21 KOs) to the canvas three more times on his way to winning by TKO.

Joshua did not indicate in the immediate aftermath of his first professional defeat that he was even considering parting ways with McCracken, a former middleweight contender who also trained former ex-super middleweight champ Carl Froch.

Lewis, meanwhile, clearly improved after adding the late Steward as his trainer.

Steward trained McCall for their first fight, which led Lewis to replacing Pepe Correa with Steward. Lewis and Steward went on to work together for the remainder of Lewis’ career.

Lewis stopped an emotionally unstable McCall in the fifth round of their rematch in February 1997 and later scored victories over Evander Holyfield, Mike Tyson and Vitali Klitschko. He announced his retirement in February 2004.

[QUOTE=TheUntouchable;19844125]Ruiz got the title shot because Miller failed tests. That's the only reason. Terrible fight vs Parker, ... Schwarz was highly ranked, did he deserve to fight in Vegas? Against Fury? Lifestyle choices yeah look at Ruiz. LOOK AT HIM.…

[QUOTE=MastaBlasta;19836890]What? "didn't do anything to be there" - BS. He showed he belonged. Every and ANY fighter with a good record is a pro and deserves to be there. They can only show they don't belong there by what they…

[QUOTE=TheUntouchable;19803327]You're not of the smart kind, are you? The title shot was gifted to him. He did well in the ring but he didn't do anything to be there in the first place. Miller got busted, Ruiz got lucky. That's…

[QUOTE=Bigchip;19805134]Is AJ more Frank Bruno or more Lennox Lewis at this point? Both Lennox and Wladimir Klitschko got a bit arrogant, lost by KO, and then changed to Emanuel Steward. Steward took them from being good fighter to making them…

[QUOTE=Kannabis Kid;19803315]Ruiz took AJs best punches and beat the dog out of him you don't know what you are talking about Ruiz vs Wilder is still a good fight and nothing is guaranteed Wilder has more 1 punch power but…