Lewis Crocker has vowed that nobody will be taking his WBO European welterweight title away from him ahead of his showdown with Deniz Ilbay on the March 12th MTK Fight Night.

Unbeaten Crocker (12-0, 7 KOs) faces Ilbay (22-2, 10 KOs) at the University of Bolton Stadium next Friday, live in the US on ESPN+ in association with Top Rank, and worldwide on IFL TV.

It sees Crocker make the first defense of the belt that he superbly won by stopping Louis Greene last August, and he’s ready to kick on from there.

Crocker said: “I’m a champion now so it’s different. People want to take the belt from me. It’s taken me 12 fights to get that belt and I won’t be letting it go. 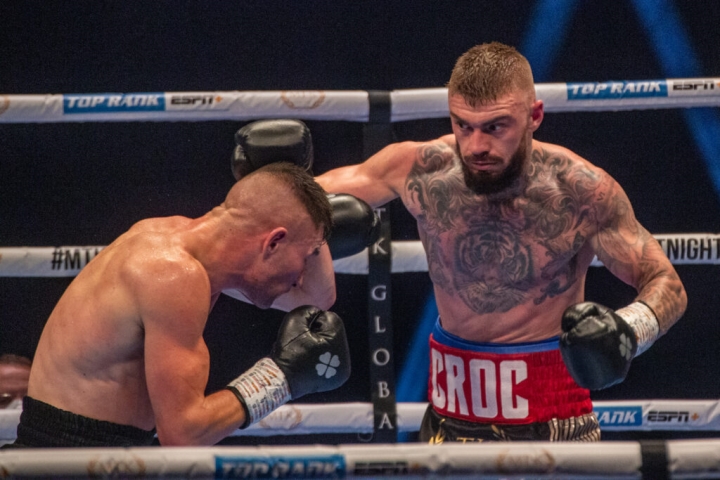 “The end goal is to win even bigger titles, and each fight is a stepping stone to get where I want to be. I’m progressing well enough, and getting right opponents at the right time.

“My gym went undefeated last year, so confidence in the group is high. Me and my trainer Dee Walsh are getting better and better with each camp as well, and it’s showing that the stuff we’re working on is coming off in the ring.

“It was class to be in the main event in my last fight, and to get a stoppage win as well. He was a big puncher and caught me with his best shots, but I walked through them like it was nothing. It’s helped to build me up and it makes me a better fighter each time I box.”

Elsewhere on the #MTKFightNight on March 12, Gary Cully squares off with Viktor Kotochigov for the vacant WBO European lightweight title, Isaac Lowe returns, Sahir Iqbal faces Liam Wells, Jordan Reynolds makes his professional debut against Robbie Chapman, Adam Azim is back in action, plus Carl Fail enters the paid ranks for the first time too.