LesPierre: Pedraza's Not A Natural 140-Pounder; I Feel I'm A Better Fighter

Four days after his nationally televised main event was postponed the morning of June 18 because his manager tested positive for COVID-19, Mikkel LesPierre was back to work at Mount Sinai Hospital in Manhattan.

The junior welterweight contender had agreed to reschedule his 10-round fight with Jose Pedraza for July 14 in Las Vegas. Suddenly, though, LesPierre was asked to box 12 days sooner than that because Jamel Herring had tested positive for COVID-19 and couldn’t defend his WBO junior lightweight title Thursday night against Jonathan Oquendo.

LesPierre was willing to change the date of his fight yet again, but only if the numbers made sense. Once Pedraza’s promoter, Top Rank Inc., agreed to increase the contract weight by three pounds, from 141 to 144, and to pay him more money, LesPierre was able to again adjust his schedule at his day job and return to Las Vegas five days later.

“I understand this is people’s livelihoods,” LesPierre said. “I do it because I enjoy it, and it’s also a source of income for me. Pedraza, it’s probably his [sole] source of income. So, I didn’t wanna not have the fight. He’s been waiting and I’ve been waiting. It was something we could make happen. It’s not like I didn’t wanna fight. I just needed to figure things out, so that I wouldn’t be inconvenienced and there were no excuses on my end.” 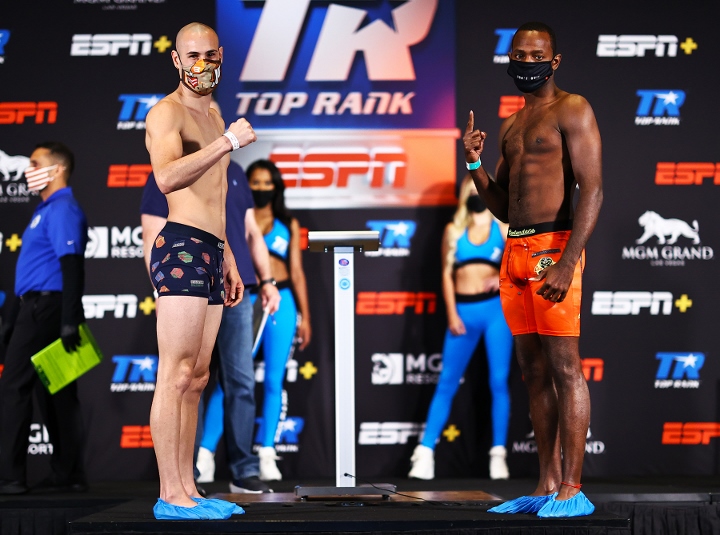 If the 35-year-old LesPierre can upset Pedraza, who is listed as a 12-1 favorite, the skillful southpaw would re-establish himself in the 140-pound division. LesPierre lost a lopsided, 12-round decision to Maurice Hooker (27-1-3, 18 KOs), then the WBO junior welterweight champion, in March 2019 in Verona, New York.

“I’m just looking to get the win and propel my career to another level,” LesPierre said. “I’ve had an opportunity before, and I wasn’t able to capitalize on it. To me, this is a better opportunity because the chances are 50-50. Even in the Hooker fight, I felt I had enough to beat him. It’s just the experience level wasn’t there. But from that experience, I feel like now I do belong, and I can compete at this level. Now that I have the right opponent in front of me, I’m gonna show that come [Thursday] night.”

The 31-year-old Pedraza, a former IBF junior lightweight and WBO lightweight champion, will fight for the first time since losing a 10-round unanimous decision to Jose Zepeda in his 140-pound debut nine months ago. Zepeda (31-2, 25 KOs, 1 NC), a southpaw from La Puente, California, defeated Pedraza by the same score, 97-93, on all three scorecards September 14 at T-Mobile Arena in Las Vegas.

“I feel like I’m the better fighter, more dominant, bigger,” LesPierre said. “He’s not a natural 140-pounder. I think that’s gonna play out in my favor, highly. So, we’re just ready to get to work.”

Not sure why, but I've really been looking forward to this matchup. Pedraza is the more decorated and experienced fighter but he seemed lethargic against Zepeda. LesPierre looked decent against a weight drained Hooker. I expect the Sniper to take…