Leonard Ellerbe: Gervonta Davis Has That 'It' Factor

Through patience and growing pains, 2019 is shaping up to be the kind of year Gervonta ‘Tank’ Davis has always envisioned after enduring a year to forget.

With one title defense already in the bank this year, the unbeaten 24-year old southpaw now prepares for a long-awaited homecoming. As previously reported by BoxingScene.com’s Keith Idec, next up for the reigning 130-pound titlist is a July 27 title defense at the 15,000-seat Royal Farms Arena in Baltimore, Md., returning to the D/M/V (D.C./Maryland/Virginia) for the first time since 2016 and his debut as a headlining act at home.

It’s an opportunity he probably could have been afforded much sooner, but was instead forced to ride out the bad in order to get to the good stuff. The path was one his handlers saw coming and hoped he’d avoid, but treat it as a learning experience as they look on the bright side in terms of timing and career relevance.

“When you’re young, you make mistakes,” Leonard Ellerbe, CEO of Mayweather Promotions explained to BoxingScene.com of the company’s star client. “The key is to learn from those mistakes and become a better man.” 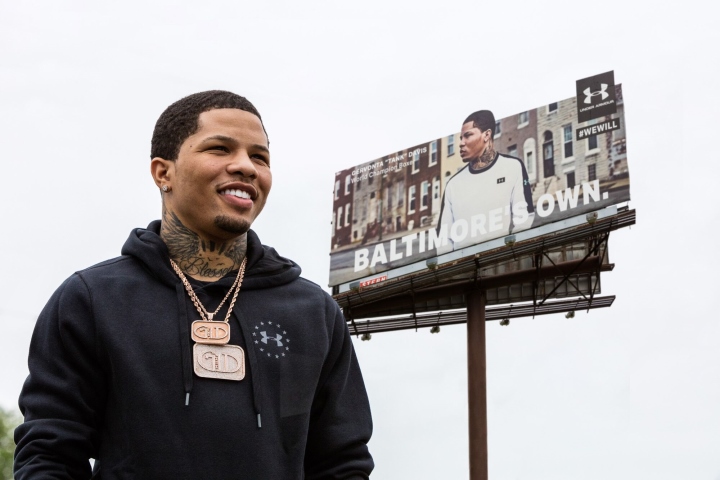 Davis (21-0, 20KOs) remains one of the most dominant forces inside the ring but it’s been the decisions he’s made beyond the ropes which have stalled his status as a rising star. Beginning with the birth of his daughter Gervanni last summer, however, the reigning two-time champ has been determined to turn his life around—for the betterment of his career and his family.

It helped remain poised when plans for a February 9 showdown versus Abner Mares were altered when the former three-division titlist suffered a detached retina and was forced to withdraw. Davis settled for replacement opponent Hugo Ruiz, whom he knocked out inside of a round in his first Showtime-televised main event.

Even with the late schedule change, the bout topped a show which drew more than 8,000 in attendance, including a large number of A-list celebrities at Dignity Health Sports Park in Carson, Calif.—more than 2,600 miles from his West Baltimore hometown and where Davis was fighting for the first time in his young career.

Given the response to the event and the long overdue arrival of big-time boxing in the DMV area, the timing was right for a homecoming.

“I’ve never seen the DMV market like this before, it huge and with a number of boxers from the area who have the potential to become big stars,” notes Ellerbe, who grew up in Northeast Washington D.C. “They all come from different backgrounds. A young man like Tank, all the youngings in the area look up to him. He was one of the few to make it out of the community. He gives these other kids hope.

An opponent has yet to be decided for the event, although former featherweight titlist Yuriorkis Gamboa has been mentioned as a leading candidate (Ellerbe declined comment while negotiations are ongoing for several contenders). Once it’s announced, the expectation is the biggest boxing event that Baltimore—and anywhere in the DMV—has experienced in decades.

“Tank’s rise to stardom isn’t by accident,” Ellerbe insists. “Even with everything he’s been through—missing weight and giving up his title (in an eventual knockout win over Francisco Fonseca on the undercard of Floyd Mayweather’s KO win over Conor McGregor in their Aug. ’17 blockbuster) and all the stuff that happened last year—and then having to deal with the unfortunate fallout with Mares, he was still in high demand for that fight.

“We had more celebrities call us for tickets for his last fight than any event we’ve done in the past year. Tank just has that “it” factor and an incredible connection with his fanbase. He’s only getting bigger in stature and the minute we officially announce his next fight in Baltimore, I guarantee, tickets will be sold out within two days.”

As big a turnout is expected, such an event is hardly the end game.

“Floyd was adamant about Tank staying active this year,” Ellerbe notes. “It was unfortunate what happened last year but 2019 is a huge year for Tank including and beyond (July 27).”

'IT factor': Ability to act a complete fool outside of the ring, yet somehow able to KO cab drivers.

'IT' my a$$ Make him fight live bodies. Call GRJ

Mayweather Promotions are making Gervonta look bad every time they talk about him. He has the It factor but we won't match him up with the top fighters... That's not an It factor that is going to gain popularity.

It comes through when guys have the 'It factor', it doesn't have to be forced on people. Mayweather and Ellerbe don't even et Davis speak.