Leo Santa Cruz: I'll be in Hall of Fame with Davis, Russell fights

Leo Santa Cruz never thought he’d be a world champion during his formative years as a teen. When he won his first world title in 2012, he compared it to winning the lottery.

Las month, Santa Cruz made his junior lightweight debut against Miguel Flores and hit the jackpot by winning a title in a fourth weight class (vacant WBA 130 pound title). In doing so, he joined recently crowned light heavyweight champion Canelo Alvarez as well as Erik Morales, Juan Manuel Marquez and Jorge Arce as the only Mexican crownholders across four divisions. Santa Cruz also has won titles at the 118, 122 and 126-pound divisions.

Santa Cruz said he’s beginning to build a case to receive a bust as a Hall of Fame fighter in Canastota, New York.

“I’m very happy to be a champion again. Being a four-division champion hopefully takes me to the Hall of Fame,” said Santa Cruz. “I’ll leave the debate up for others. I do want to go into the Hall of Fame. Once I get the big fights with Gary Russell Jr. and Gervonta Davis, those are going to be the ones that put me up there.” 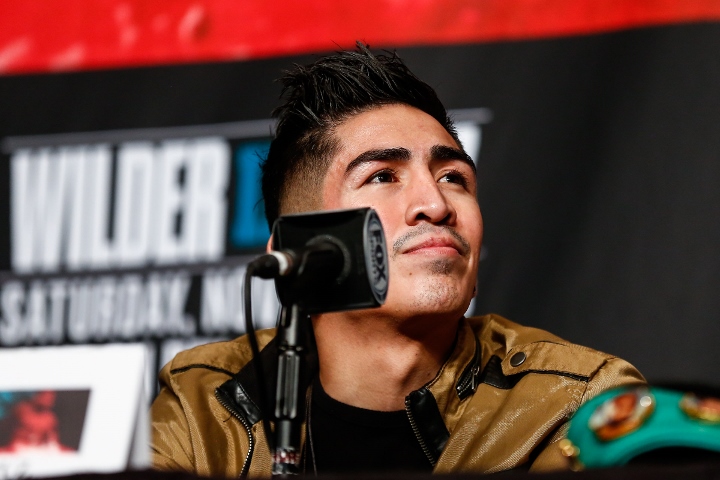 When asked if he had a preference on which fighter he’d like to face first as he embarks on a route to be forever immortalized, Santa Cruz preferred Davis because he believes “Tank” is the stronger fighter.

Santa Cruz thinks that since he looked a bit vulnerable in the Flores fight, Davis or Russell Jr. will finally step up to the plate and accept his challenge.

“That’s what I want. I want them to take the fight, and go for it. They are going to make a big mistake,” said Santa Cruz. “I’m going to work on my mistakes [from the Flores fight] and improve on my power and be a lot better. I’m going to adjust to this new weight class.”

If Santa Cruz were to rate his average performance against Flores, it would be “not good,” he said.

“I didn’t do what I wanted to do. I didn’t do anything well in the fight,” he said. “I fought my heart out and did the best that I could. I was surprised by how tough the fight was with Flores. I knew he was going to come with everything. He came prepared and gave a great fight. My dad was telling me I needed to win the exchanges and pressure him.

“If Gervonta and I fight, I will work really hard, a lot better than the Flores fight. He will not like my pressure. If it gets passed four rounds with Davis, he’ll get tired and overwhelmed. That will be my plan to beat him.”

Two great fights with Frampton, decent wins over Mares, but the rest is poor. Should have fought Rigo, and Russell, two other in many ways wasted fighters. People talk about the HW not fighting each other, so many fights around…

[QUOTE=Califire209;20246860]Santa Cruz is tailor-made for Tank too knock him out. The man's better off calling out lomachenko at 130[/QUOTE] I doubt it. But that why they fight. What odds would you give me if I take Leo to survive this…

A vacant title against a failed title contender

[QUOTE=deanrw;20246443]He belongs in the hof right now. His body of work is impressive. He'll be in the hof along with other Puerto Rican greats Cotto and Julio Ceasar Chavez.[/QUOTE] Julio Cesar Chavez is already in the Hall of Fame player,,…