"Winning this title means the world to me," said Santa Cruz. "This is all for the fans who support me. I didn't feel myself today and didn't perform the way I wanted to. I'm going to get back in the gym and get a big fight in 2020."

The action began to heat up in round three, as Santa Cruz began to find a home for his straight right hand that would help him control much of the remainder of the fight. Flores adjusted and used more movement to try to counteract Santa Cruz's aggression and also focused on countering those right hands with body shots.

"I'm glad I got the victory," said Santa Cruz. "Miguel is a good fighter, he gave me a tough fight and he proved he's not a pushover. We put on a great battle."

"It was a good fight and I showed I belong at this level," said Flores. "I just went 12 rounds with Leo Santa Cruz. It's not an accomplishment in itself but I slowed down his pace. Like I said before, it's not only about throwing punches, but it's about ring IQ and I showed I have it." 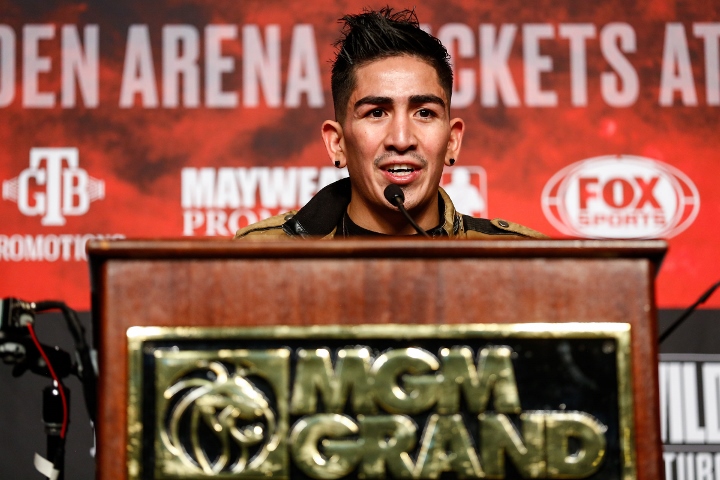 Despite Flores' tactics, Santa Cruz was able to stay in control and frustrate his opponent. Flores was deducted a point by referee Tony Weeks in round eight due to excessive holding during the many exchanges.

"It was a close fight and I didn't think he was landing too much," said Flores. "He was busy but he wasn't landing too many shots. I landed cleaner harder shots but he was just busier."

Flores continued to try to rough up Santa Cruz and accidentally hit him with a headbutt in the ninth round that opened up a cut over Santa Cruz's left eye. The four-division champion was able to weather that cut and finished strong on his way to a unanimous decision by scores of 115-112 and 117-110 twice. Watch highlights HERE.

Russell fight at 126 should of been made a long ass time ago.

So it is now LSC's time to talk the press. His talk will now fade away and then from May till June, GRJ will start his yearly talk until his yearly fight against a no-hoper is out of the way.…

Davis has moved up, so that one seems out of the question. I'd be down for a Russell Jnr fight though if he wanted to move up. Let's see though.

[QUOTE=Htown-Finest;20210468]LSC one of haymons protected favored fighters I don’t hate on dude like some on here. Ppl weren’t saying all this **** when he was fighting likes Mares and frampton It’s fight $$$$$$ business. I believe haymon will put LSC…

Likable young man. He can fight. Cannot blame him and his team for ensuring he $ecures his bank balance which i think they have done with the carefully selected opponents he has made a career of fighting. Now is time…