Leo Santa Cruz: I Fight Whoever They Tell Me To Fight

He also addressed the criticism he is taking for facing a low-profile opponent for the third time in his past four fights. In his first fight at 130 pounds, the three-division champion is scheduled to meet Miguel Flores on November 23 in Las Vegas.

The backlash from fans has been intense because Santa Cruz defeated unheralded Rafael Rivera in his last fight. Rivera replaced Flores on short notice for that February 16 match in Los Angeles because Flores suffered an ankle injury in training camp.

“People are always gonna talk, you know?,” Santa Cruz told a group of reporters before a press conference Saturday at Staples Center. “They want the best out of you and everything. Me, I just know this is my job. I fight whoever they tell me, like I say. Workers, when they have a job, they do what they already tell ‘em to do. They’re not gonna go and tell their boss, ‘Hey, I wanna do this. I wanna do that.’ I just tell them, ‘Hey, this is who I wanna fight,’ and if it happens, it happens. Well, whoever they throw in front of me, that’s who I fight.” 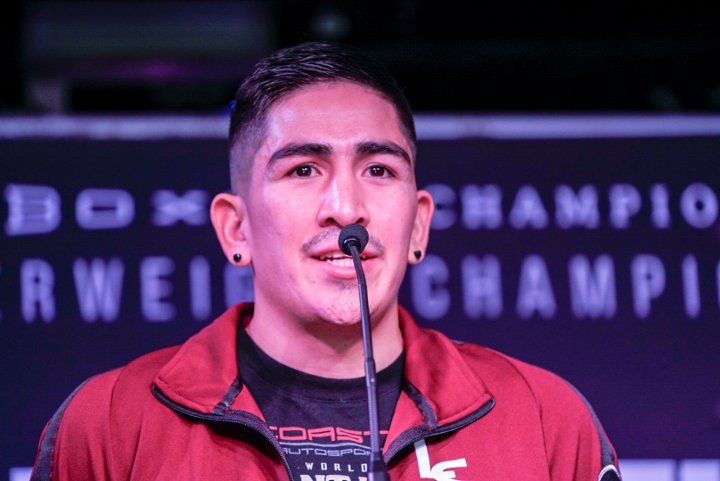 Santa Cruz (36-1-1, 19 KOs) contends he would’ve preferred facing Russell in a featherweight title unification bout next. He suggested Russell (30-1, 18 KOs), the WBC 126-pound champion, might’ve priced himself out of it.

“Maybe [Russell] wanted too much money and stuff like that,” Santa Cruz said. “But on my side, I wanted that, too. I said, ‘Let’s make it happen.’ But I know the promoters couldn’t come to an agreement on something. I don’t know. It was maybe money-wise. I don’t know.”

The 31-year-old Santa Cruz, of Rosemead, California, expressed more optimism regarding a fight against another potential opponent from Maryland, but Baltimore’s Davis (22-0, 21 KOs) recently moved up from 130 pounds to the lightweight limit of 135.

“I wanna try 130, get stronger, you know, work on power at that weight class,” Santa Cruz said. “And then hopefully we’re looking for that big fight against Tank Davis.”

Within the 130-pound division, a fight versus Valdez (26-0, 20 KOs) would be intriguing as well. Valdez vacated the WBO featherweight title in August to move up to 130 pounds, but he could be headed for a fight with WBC 130-pound champion Miguel Berchelt (36-1, 32 KOs).

“You know, he has a different promoter,” Santa Cruz said of Valdez, who’s promoted by Bob Arum. “But if that fight gets made, that’s a great fight. You know, like Barrera and Morales, two Mexicans. So, I’ll be up for that fight, too.”

“I think Flores is a dangerous fighter,” Santa Cruz said. “A lot of people are thinking that, ‘Oh, he’s gonna be an easy fight.’ This ain’t gonna be no easy fight. You know, he’s my type of fighter. He comes forward, throwing a lot of punches, good power, everything, good body shots. And he wants it. You know, he wants it as much as I do. So, that is gonna make him dangerous.”

[QUOTE=j.razor;20098459]Cuz the quality fighters won't fight them, DUH.[/QUOTE] Funny how they’re the only Ones who can’t get a quality opponent :thinking:

[QUOTE=Senor_frogs;20097231]Nope. Good fights to cash in on. But what about the Charlo bros :lol1: nothing but mismatches[/QUOTE] Cuz the quality fighters won't fight them, DUH.

[QUOTE=Theosis26;20096848]When Santa cruz is matched tough he generates decent enough numbers to where he can dictate his own career. Haymon probably just advises Santa cruz who to fight, not outright force him. [B]He will easily beat flores & then became…

[QUOTE=factsarenice;20096713]The Hayman MO is talk fights, fight less and only fight the miss-matchs, old names and fighters that never were. Try to sell it on PPV...wash rinse and repeat.[/QUOTE] Wash rinse and repeat is what you do with your propaganda.

[QUOTE=Bronx23;20096710]Santa Cruz has always blamed Haymon for us not getting the fights we want to see him in. Remember when Rigo was on his ass and he said "Al Haymon told me that wouldn't be a good fight". Idk how…