Gilberto Ramirez’s name has been floated as a viable option for a future super middleweight unification clash with fellow unbeaten titlist Callum Smith. The timing makes perfect since he is fighting this week in Los Angeles.

It’s entirely possible that discussion of such a fight is merely to draw attention to his light heavyweight showcase fight this Friday versus journeyman Tommy Karpency in Los Angeles. which is just as well since Smith’s next notable opponent will likely come from another recently announced fight.

Former middleweight titlist David Lemieux will officially begin his long overdue campaign as a full-time super middleweight, as he takes on England’s John Ryder. The two will collide on May 4 in Las Vegas, in chief support to the World middleweight championship between reigning king Saul ‘Canelo’ Alvarez and two-time divisional titlist Daniel Jacobs. 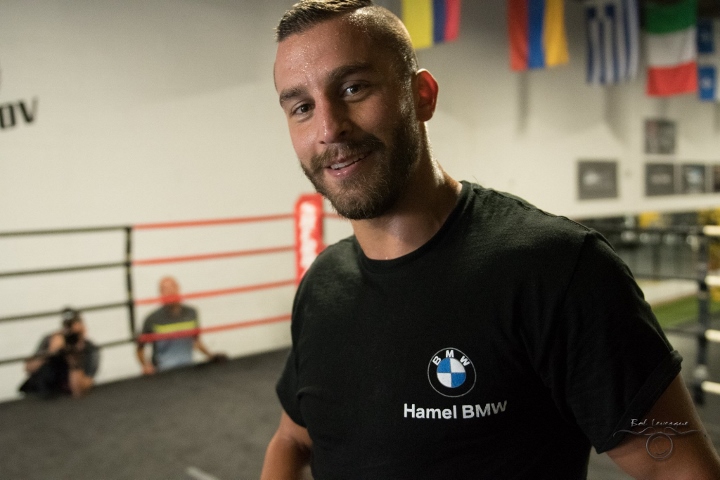 Lemieux’s clash with Ryder was announced by Golden Boy Promotions on Wednesday, but didn’t include the full details of their super middleweight clash. Part of the delay stems from deciphering what exactly will be at stake, given Ryder’s placement as the mandatory challenger to Smith’s World Boxing Association (WBA) ‘Super’ 168-pound title.

Alvarez still owns the ‘Regular’ version, which he acquired in a 3rd round knockout of Rocky Fielding last December. The fight was believed to be a one-and-done affair for Mexico’s leading boxing superstar, but for now has been permitted to keep the belt along with his collection at 160 pounds, the latter which will be at stake on May 4 versus Jacobs.

For now, Lemieux and Ryder will vie for the WBA ‘Interim’ title, with the potential for an upgrade pending the outcome of the evening’s main event

Either way, the winner will gain a crack at the full title. A shot at the king will come sometime after Smith (25-0, 18KOs) returns to the ring on June 1 at Madison Square Garden in New York City for his first fight since knocking out George Groves to win the title and the World Boxing Super Series 168-pound tournament last September.

Ryder (27-4, 15KOs) is the current mandatory challenger, earning that placement following a 7th round knockout of previously unbeaten Andrey Sirotkin last October in England. The London-based southpaw trailed early and was forced to overcome a clash of heads to prevail courtesy of a body-shot knockout.

The win was his third straight since dropping a 12-round decision to Fielding in April ’17.

Lemieux (40-4, 34KOs) officially fights at 168 pounds after having for years struggled to make the middleweight mark. The 30-year old from Montreal enjoyed a brief 160-pound title reign, decisioning Hassan N’Dam N’Jikam in June ’15 only to lose the belt just four months later in an 8th round knockout versus then-unbeaten Gennady Golovkin.

Six wins have followed in his last seven bouts, but so too has troubles at the scales which resulted in two fights being canceled.

Lemieux missed weight for a planned but ultimately scrapped March ’16 homecoming appearance versus James de la Rosa. He resurfaced two months later on the undercard of Alvarez’s knockout win over Amir Khan, scoring a blistering stoppage of his own in tearing through Glen Tapia in four rounds. It ignited a four-fight win streak which led to another middleweight title shot, where he was soundly outboxed by Billy Joe Saunders in Dec. ’17.

His 2018 campaign was utterly forgettable and also the last time he will see middleweight action. Lemieux missed weight in an eventual win over Karim Achour to begin a year which ended with his being hospitalized due to dehydration and forced to withdraw from a planned title eliminator versus Tureano Johnson last December.

A win would’ve netted Lemieux a middleweight title fight versus Alvarez; instead he will gun for the 168-pound title still in his possession, although likely to be relinquished in due time.

What’s even more likely is the winner of his bout with Ryder getting a crack at Smith long before Ramirez, whose own plans of remaining at super middleweight seem up in the air as he tests the light heavyweight waters. For now, any such talk of title unification merely serve as means to remind fans of his showcase fight in Los Angeles this weekend.

With such discussion already running into obstacles (Ramirez is with Top Rank and ESPN, Smith with Matchroom Boxing and DAZN), it stands to reason that the answer to Smith’s next major ring challenge will come three weeks later in Las Vegas.

Both of these guys are ordinary and would be outclassed by Smith. But Smith needs someone to fight. Ramirez and Benavidez are not going to risk fighting him any time soon.

I wouldn’t want to fight Smith if I was either of them. Him and Ramirez are massive. Both could be easily outboxed