Erik Morales was getting married. I was on deadline. Ricardo Jimenez was being Ricardo Jimenez on a Friday when most of his peers would be packing up for the weekend. (photo by Chris Farina)

That meant one of the premier publicists in the world was working the phones, pinpointing his target and talking a nervous writer off the ledge.

“We’ll get him, don’t worry,” he told me. The “we” part made me feel better, like he had as much invested in this interview as I did. In a way he did, because as a former journalist with La Opinion, he knew precisely what it meant for a story to have the right interview so the complete story was told, not second-hand, but from the source.

And what would a piece in the now-defunct Fuego magazine on the classic trilogy between Morales and Marco Antonio Barrera be without Morales?

Eventually, Jimenez tracked “El Terrible” down in Tijuana, called me up and with his always masterful translating leading the way, I had my interview and the story.

I could rest easy. For Jimenez, it was off to the next mission. And there was always a next mission, especially during his years with Top Rank, where he helped take the careers of countless fighters further than they might have gone without his guiding hand.

Huge names in the Hispanic community for sure, but it was Jimenez who brought them to English-speaking fans and media, and if you haven’t been around the business long enough to know the bad ones, you’ll never appreciate the good. 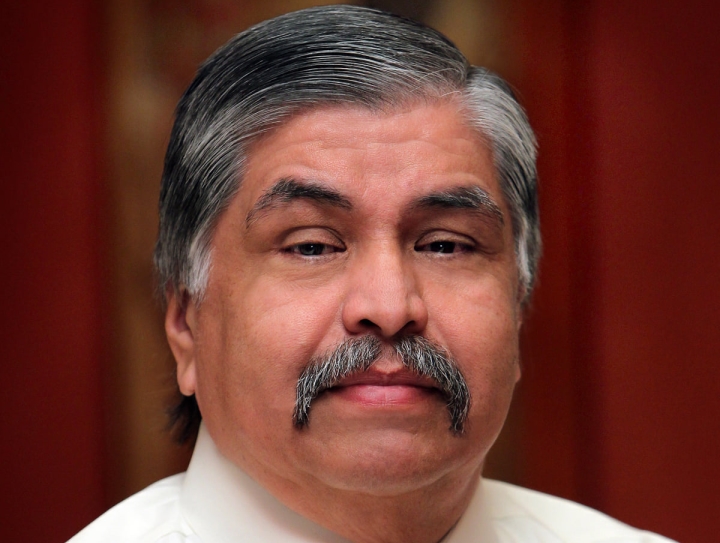 How many times did I interview a Spanish-speaking fighter, ask him a question and receive a five-minute answer in response? Then the translator would take it all in and say, “He says he feels strong.” Now I may not know Spanish, but I do know he said more than that.

We never had that problem with Jimenez, who not only gave accurate translations back to us, but often would ask follow-ups of his own or prod his fighters to expand on their answers. A writer knows what a writer needs, and Jimenez always made sure we got what we needed. In the process, he took fighters who were often these mythical figures a world away from us due to a language barrier and made them real. We heard their stories, saw that there was more to them that what happened on Saturday nights between the ropes.

It was at times like these that we learned not just about the fighters, but about the man between them and us. Sure, this was how Jimenez put food on the table for his wife and two daughters, but you can tell in a minute the folks who are doing it strictly for the paycheck. Ricardo Jimenez was not one of those guys. He did his job, for sure, getting publicity for his fighters and the events they fought in, but it was almost like he was a big brother to all of them. He even broke his leg once while trying to break up a press conference brawl between Oscar De La Hoya and Fernando Vargas in 2002.

Yet while he was protective of those he worked with, he wouldn’t keep them from saying what they had to say.

In that sense, I always go back to the interviews Jimenez would translate for me with Chavez Jr. The two worked together for years, and it was clear that Ricardo liked the kid and wanted him to succeed. He also knew the son of the legendary “El Gran Campeón Mexicano” was a magnet for controversy and had the tendency to walk himself into situations that invited criticism. So while most publicists would try to steer questioning away from anything dicey or negative, Jimenez let those questions come, and he let Chavez Jr. answer. In essence, while publicity was important, especially positive publicity, allowing the fighters to be themselves and tell their story was more important.

And Ricardo never failed those between the ropes and outside them.

He was a pro’s pro, and right about now, the former Sports Editor for La Opinion would be giving me the business for burying my lede, but if you’re reading this website and follow the sport of boxing, you’ll already know that we lost Ricardo on October 11 due to a stroke he had a couple days earlier. He was only 64, much too young to leave us, but in 2020, nothing really makes sense anymore.

What is evident is the mark he made on the sport of boxing, where tributes have been pouring in since the news broke on Sunday. Knowing Ricardo, it’s the kind of attention he would have ran from, but deep down, he would appreciate the respect and love he earned.

Always a phone call or an email away, in an unpredictable sport Ricardo Jimenez was Mr. Reliable and a writer’s best friend. We’ll miss him.

For information on the Ricardo Jimenez Memorial Fund, visit https://ricardojimenez.carrd.co/

A very sweet man, met him at the Marquez vs Pacquiao 2 presser in LA olvera street. RIP good sir. A memorable face to me.

RIP Ricardo Jimenez I talked to him at the Morales vs. Pacquaio 1 MGM lobby, guy was nice as could be.