Lebedev Aims To Get Back in The Mix With Thabiso Mchunu

According to the Russian Boxing Federation, former WBA/IBF cruiserweight champion Denis Lebedev will halt his retirement plans and come back to the ring this coming December. Lebedev (32-2, 23 KOs) is expected to fight former title challenger Thabiso Mchunu (21-5, 13 KOs) of South Africa on Dec. 21 in Krasnoyarsk, Russia.

Lebedev, 40, was last been seen in the ring in November 2018, winning on points over previously undefeated (19-0) American Mike Wilson. Denis was then mentioned as an opponent for undisputed cruiserweight champion Oleksandr Usyk for a fight in 2019 but then chose to announce his retirement this July. 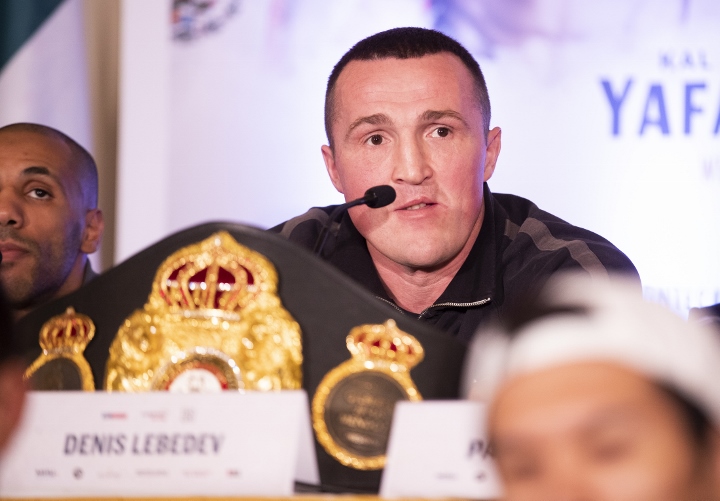 Lebedev returned as a cruiserweight under the guidance of powerful manager Vladimir Hryunov and quickly racked up a series of impressive stoppages (including those of Enzo Maccarinelli and Alexnader Alexeev). A winning streak got him a title shot and he came very close to dethroning a long-time WBO king Marko Huck, losing a disputed split decision.

Lebedev rebounded with wins over ring legends Roy Jones Jr. and James Toney (allowing for an interim version of the WBA belt) in 2011, both times getting mixed reaction from local fans. He was then elevated to the full WBA status after previous titleholder Guillermo Jones was reinstated as a “champion-in-recess”.

A comeback fight between those two turned into one of best cruiserweight classics ever, when Jones stopped a spirited effort from Lebedev (and busted his face badly) in the eleventh to be caught later on illegal substances and to see his win overturned.

The Russian banger come back more than a year after with a kayo of Pawel Kolodziej to retain his belt, then made a couple of defenses and unified with arguably his most impressive performance, knocking out IBF champion Victor Ramirez in tow. He lost the red belt (the black one wasn’t on tap) just a fight later, losing on a split decision to rising star Murat Gassiev. Lebedev donated the remaining belt to the World Boxing Super Series, which he rejected to take his part in, after the sole defense.

Mchunu, 31, is best known for some fierce intra-African rivalries with Flo Simba, Zack Mwekassa, Ilunga Makabu and Olanrewaju Durodola, and later Thomas Oosthuizen, as well as for his upset win over Eddie Chambers in 2013. He challenged Usyk for his WBO title in late 2016 and was stopped in nine. He stopped Willbeforce Shihepo in three in his latest fight.

Also on the card is another return, the famed but fragile power puncher Dmitry Kudryashov (23-3, 23 KOs) will be seen in the ring against yet undefined opponent. The show will be promoted by the Patriot promotional outfit.

He hasn't fought a live opponent in three years and he's 40. He was once a top fighter but not sure his style will age well